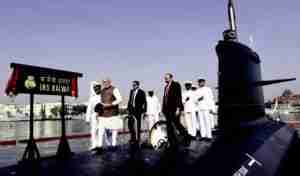 India’s     first      modern     conventional submarine, INS Kalvari, was commissioned into the Indian Navy on 14 December 2017 by the Prime Minister, Shri Narendra Modi in Mumbai. Named after the dreaded Tiger Shark, a deadly deep sea predator of the Indian Ocean, Kalvari is the first of six Scorpene class submarines being built by Mazagon Dock Ltd (MDL), in collaboration with Naval Group (earlier DCNS) of France as part of Project 75 at a cost of Rs 350 crore. The second Scorpene under construction, Khanderi, was launched in January 2017 and is currently undergoingsea trials. The third Scorpene, Karanj, is currently being readied for launch. All the submarines are scheduled to be delivered to the Navy by 2020. The 66 meter Kalvari can carry 18 torpedoes and can travel 1,020km underwater. It has superior stealth capability such as advanced acoustic silencing techniques, low radiated noise levels, hydro-dynamically and optimised shape and the ability to launch a crippling attack on the enemy using precision guided weapons. It can dive up to a depth of 300 metres to elude enemy detection. The submarine is capable of multiple roles to include anti-surface warfare, anti-submarine warfare, intelligence gathering, mine-laying and area surveillance. The first submarine to be commissioned into the Indian Navy was also called Kalvari. Commissioned on December 8, 1967, it served the Indian Navy for nearly three decades till May 1996. In true nautical traditions, the Kalvari has now been reincarnated and is once again, a powerful predator of the deep, guarding India’s vast maritime interests. 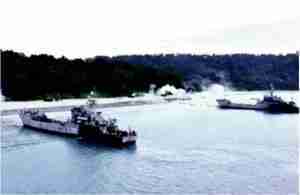 A major military exercise, ‘Defence of A&N Islands Exercise’ (DANX), was conducted from November 20 to 24 to fine-tune operational drills and synergy among the three wings of India’s Armed Forces in the Indian Ocean Region (IOR). The exercise was conducted under the aegis of the Commander-in- Chief Andaman and Nicobar Command (CINCAN), Vice Admiral Bimal Verma. The strategically located Andaman and Nicobar Island archipelago,with its 572 island cluster and with requisite force-levels and infrastructure, is an ideal operating base to ensure security of India’s sea lanes of communication converging towards the Malacca Straits as well as act as a pivot to counter China’s strategic moves in the IOR. This was the first major exercise conducted under the aegis of the tri-Service Andaman and Nicobar Command. Warships from the Navy, fighter aircraft and heavy lift aircraft from the IAF as well as infantry combat vehicles, special forces and regular troops from the Army took part in the exercise, which was planned to synergise application of force and to practice and validate procedures and drills aimed at defending the A&N Islands. It included amphibious landings of troops by ships, slithering of troops from helicopters, night para jumps at sea and the recapture of an island that had fallen into enemy hands. 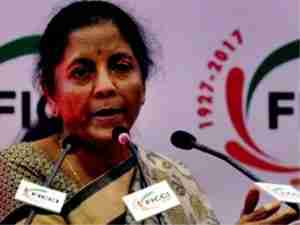 India’s Defence Minister, Ms Nirmala Sitharaman, in a special session held as part of the 90th AGM of Federation of Indian Chambers of Commerce &Industry (FICCI), spoke on a wide range of defence related issues. She delivered a clear message that military modernisation was a key area of focus for the current government, which would include a speedy and transparent acquisition eco-system with accountability. She also stated that the government wants to engage with, listen and be responsive to the needs of the industry. During the session, held on 13 December 2017, the Raksha Mantri (RM) stated:

While the RMs remarks were most reassuring, the present ground situation suggests that not much has happened to kick start the Make in India programme in the Defence Sector. A lot would be required to move the behemoth that is the MoD, as Mr Parrikar, the former RM found in his tenure as RM.

The defence ministry has cancelled a negotiated USD 500 million deal with Israel for the Spike man portable Anti-Tank Guided Missile (ATGM) and has tasked the Defence Research and Development Organisation (DRDO) to indigenously develop a version of a similar system. The Spike missile is a fourth generation, fire and forget, top attack ATGM.The army had planned to equip all infantry and mechanised infantry battalions, operating in plains and deserts, with it. The deal was to be inked with an Israeli company, Rafael Advanced Defence Systems, but was cancelled to push indigenous development.The DRDO claims that since it has developed the Nag missile system it could also produce this in the next three to four years.However, if the DRDO fails to produce the missile in the stated timeframe, it would tell on the operational capability of the Army.

While the story of India’s indigenisation effort has, for the most part been bleak, one area where India can proudly boast of attaining indigenous mastery is in the field of ballistic missile technology. India’s Integrated Guided Missile Development Programme (IGMDP), launched in 1983 to indigenously research and develop a wide variety of missiles, gave birth to the Prithvi, the first of a series of three ‘Made-in-India’ and ‘Made-by-India’ nuclear-capable ballistic missiles. The programme, overseen by the Defence Research and Development Organisation (DRDO), proceeded under the leadership of former President APJ Abdul Kalam and the first missile, Prithvi I was successfully test fired five years later in 1988. Since then, India has developed three versions of the Prithvi.

The success of the short-range Prithvi series ballistic missiles spurred the creation of India’s self-honed research and development effort which in turn led to the development of the sophisticated and longer-range Agni, K-series, BrahMos and Nirbhay ballistic and cruise missiles, which today form the backbone of India’s nuclear and conventional arsenal. And now, DRDO has successfully test fired the Quick Reaction Surface-to -Air Missile (QRSAM) on 22 December 2017. The QRSAM was test fired from a canister mounted on a rotatable truck-based launch platform at the Launching Complex-I (LC-I) of the Integrated Test Range (ITR) at Chandipur-on-sea. The trial, the third of the newly developed missile was conducted to check various parameters in its subsystems and performance of advanced software. It was successful as were the earlier two trials. 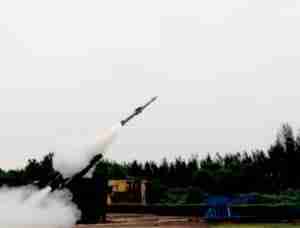 The homegrown canister-based high-speed weapon system, which can deceive enemy radars making it difficult to be detected, is capable of destroying aerial targets, tanks, bunkers and short range missiles. It is a highly mobile, all-weather and all-terrain missile having electronic counter measures against all known aircraft jammers, which can destroy multiple targets at a distance of 25 km in less than one minute. Considered to be a unique system in its class, the missile is expected to supplement medium range surface-to-air missile Akash.

The state- of-the-art missile uses high-energy solid propellant. It will have to go through a few more development flight trials before going into user phase tests.

The IAF air base at Kalaikunda in West Bengal, has since 2004 been prepared as a base for facilitating joint air exercises between the IAF and the Republic of Singapore Air Force (RSAF). In October 2005, a defence cooperation agreement was signed between the two countries for the conduct of joint exercises which, since 2006 are an annual event. 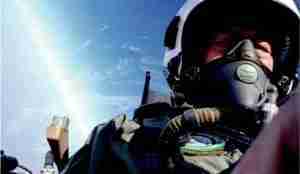 This year, the RSAF came to India with six F-16 jets for the annual joint exercise. Singapore has very little airspace available in its own island nation and has been leasing out the Kalaikunda base for its drills since 2004. The exercises carried out are for a period of one month. During this exercise, Mr Ng Eng Hen, the Defence Minister of Singapore, flew in the rear cockpit of the plane from the Kalaikunda airbase. “I am not a pilot,” said Dr Ng, when asked whether Singapore plans to buy the Tejas. “But I can say it felt like I was riding in a car; it was really smooth.” India’s Tejas thus has a new brand ambassador. This is also a shot in the arm for the Tejas programme.

BDL is committed to innovate, design and engineer high quality state-of-the-art defence products to meet the requirements of Indian Armed Forces. With this objective, Design & Engineering (D&E) Division has been established to fulfil the needs of users. As a manufacturer of various missile systems for almost five decades, BDL has acquired substantial knowledge in missile & allied technologies and developed products. It has been awarded with Hon’ble Raksha Mantri’s Awards for Excellence for the year 2014-15 for Amogha-I ATGM in Innovation category on 30 May 2017.

Design facilities for Optics, Lasers, Radio Frequency (RF), embedded systems, Aerodynamics, Guidance & Control, Computer- Aided Design (CAD), Seeker, Avionics, On -Board Computer, Telemetry and Reliability Estimation are being established in the Division. A Missile Development Group (MDG) dedicated to the design and development of missile systemsBDL has been established, which involves academia and private industry for the development of technologies & subsystems required for missiles.

The first successful product designed and developed by D&E division is ‘FLAME’ (Fagot Launcher Adapted for Milan Equipment) Launcher for Anti Tank Guided Missiles (ATGM) along with its Test equipment and Simulator. The next noteworthy product is Counter Measures Dispensing System (CMDS), an airborne avionic product.

This is an indigenous launcher for Milan ATGM and was inducted into service after thorough evaluation by Indian Army. FLAME was further upgraded to FLAME Mk-II to increase compactness to the launcher resulting in weight reduction with improved portability and reliability. 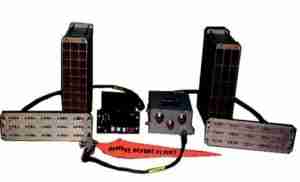 IN MEMORY OF MY DEAREST FRIENDS GEN...