Poll of the Week. 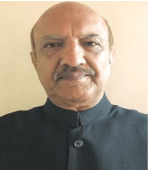 Protests are a legitimate part of democratic functioning to bring home to the govern- ment the concerns of society against per- ceived injustice. This is adopted when other means to highlight the concerns of an individual, group or institution have not yielded the desired results. This was the medium adopted by India to achieve free- dom, wherein Gandhi and others resorted to non-cooperation and other means of protest to force the British to leave the country. Bringing the country to a halt was a legitimate tactic because India was under foreign yoke. Post independence, such forms of protest got sanctified as a neces- sary component of democracy, even though India was a free country and had the means to seek redress through their own people.

Get your favourite magazine delivered home with a single click.

Give Us a Salute

For as little as Rs. 500, you can support SALUTE’s independent, quality analyses and help us shape perspectives. It will only take a minute of your time. Thank you.

Copyright © 2018 SALUTE. All Rights Reserved. Material on this website may not be reproduced in whole or in part, in any form or manner, without prior written permission from the publisher. To request permission, please email editor@salute.co.in. SALUTE INDIA C/O Flags Media PVT. Ltd. A 47 Hauz Khas (LGF), New Delhi, India 110016
ByiNFOTYKE - Web Design Company