The Indian Air Force was hoping for a minimum of 80 Dassault Rafale fighters, but the Modi government has kept the initial order down to 36 fighters in a fly away condition for 7.8 billion euros. Or USD 9.13 billion (@ 1 euro=USD 1.17). This gave rise to the calculation that we were buying the fighters for Rs.1600 crore each. During the run-up to the deal, the then defence minister, Manohar Parrikar, muddied the waters a bit by making off the cuff comments about the high cost of the Rafale compared to the IAF’s mainstay, the SU-30 MKI. I don’t think there is any issue about the quality of the Rafale, unless Ram Jethmalani has a view on it, like he had on the Bofors FH-77 howitzer.

The public, quite rightly too, believes that all weapon purchases by the government involve murky transactions and huge pay-offs to figures in the government. This has been our well-beaten track record. The Modi government too is a government of politicians and many people believe that the main offset contractor, Anil Ambani’s Reliance Defence, suggests a deal is on. This should lend further credence to that. According to Ministry of Company Affair’s, Reliance Defence Limited was registered on March 28, 2015. On April 11, 2015, Reliance Defence Limited becomes the main partner in to ensure the 50 percent offset clause under which Dassault and other related French parties will invest half the contract value back in the country. Government officials insist that 74 percent of the offsets will be exported, earning 3 billion euros for the country in the next seven years. 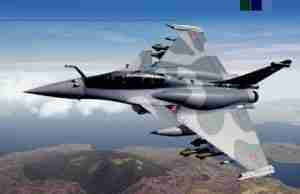 Incidentally Anil Ambani’s flagship company, Reliance Communications Ltd. (stylised as RCom), just defaulted on a major foreign loan and its future ability to fulfil its Rafale offsets commitment should now be in doubt. The defaulted 2020 notes issued by RCom, once the country’s second-largest wireless operator, were trading at a record low of about 35.6 cents on the dollar in Hong Kong. The company’s shares slid 3.3% to an all-time low of Rs11.55. Yet, Reliance Defence is gung-ho about fulfilling its Rafale related obligations. It’s not without reason that Anil Ambani is believed to be close to Prime Minister Modi and to some in his close circle.

IAF “spokesmen” have been justifying the Rafale purchase because the package includes the Meteor air-to-air missile. The Meteor is the new game changer in the air. It increases the “no-escape” zone for a hostile aircraft by about three times. Meteor is an active radar guided beyond-visual-range air-to-air missile (BVRAAM) being developed by MBDA. Meteor will offer a multi-shot capability against long range manoeuvring targets in a heavy electronic countermeasures (ECM) environment with range in excess of 100 kilometres (62 mi). According to the manufacturer, in a head-on engagement the Meteor provides a no-escape zone three times greater than that of a conventionally powered missile. With the Meteor launched in pursuit of a target — a tail-chase engagement — the Meteor is five times as lethal as a conventional equivalent such as the American AMRAAM. According to MBDA, Meteor has three to six times the kinematic performance of current air-air missiles of its type. The key to Meteor’s performance is believed to be a throttleable ducted rocket (ramjet) manufactured by Bayern-Chemie of Germany.

THE INDIAN AIR FORCE WAS HOPING FOR A MINIMUM OF 80 DASSAULT RAFALE FIGHTERS, BUT THE MODI GOVERNMENT HAS KEPT THE INITIAL ORDER DOWN TO 36 FIGHTERS IN A FLY AWAY CONDITION FOR 7.8 BILLION EUROS. OR USD 9.13 BILLION (@ 1 EURO=USD 1.17). THIS GAVE RISE TO THE CALCULATION THAT WE WERE BUYING THE FIGHTERS FOR RS.1600 CRORE EACH.

IAF officers have been wrongly giving the impression that the Meteor missile Is the real reason for the Rafale’s purchase. It was even said on a RSTV panel discussion in which I took part by an Air Vice Marshal who has found second wind as a strategic expert. The fact is that the Swedish Gripen has now been integrated with the Meteor and open sources indicate that the IAF too is contemplating integrating the SU-30MKI and Meteor. Even the Tejas can be fitted out with Meteors. So we are not buying the Rafale for the Meteor.

The cost of procuring Meteors is hard to come by. Limited figures came to light in Germany in 2013. The Luftwaffe will acquire 150 missiles at a cost of around $323 million, plus a further $175 million for integration. That compares favourably with a price tag of USD 423 million for 180 AIM-120Ds, which the Pentagon paid in 2012. Today, each Meteor will cost about 2.5 million euros each. I don’t think the IAF will need more Meteor missiles than the USAF or Luftwaffe. But then there are other missiles to pay for too. Missile purchase can never be part of the capital cost of a fighter. Since they are expendable, and presumably meant to be expendable, they should be part of revenue expenditure.

Make no mistake. The Rafale is a top class 4+-generation fighter. Perhaps even the best. But we are concerned with prices and pay-offs. If this is a given we must be happy that we made a good purchase.

Dr Mohan Guruswamy is Chairman & Founder, Centre for Policy Alternatives and former advisor to the Finance Minister (1998), Government of India. An alumnus of the John F. Kennedy School of Government, Harvard University and the Graduate School of Business, Stanford University, he has authored many books, among them being ‘Chasing the Dragon: Will India catch up with China”.