Photos on a friend’s Facebook post informed us about the hitherto unknown Balisinor Dinosaur museum and park (Rayoli village) almost right in our backyard in Gujarat! Immediately we set off to check it out. With a little help from google maps and the fantastic roads, we found ourselves at the museum in well within two hours (from Vadodara). 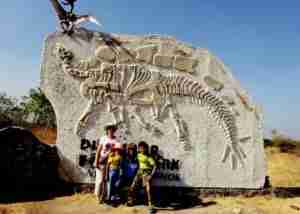 We were disappointed immediately as it appeared to be in a state of neglect. Just large empty spaces with a few weathered life size dino models. But such is the allure of dinosaurs that the visitors (including us) were eagerly taking selfies even with them!

We drove up to the (close by) fossil park next. A humble roadside tea shop sells the entry tickets where we chanced upon a guide. Once he got on board, our trip changed for the better. He transformed this middle of nowhere desert land into a land of wonder. We began to feel terrible stepping upon this priceless historic terrain. He explained to us how to recognise the fossils (pink in colour) embedded within the (dark grey) stone. He told us which parts were fossilised dinosaur flesh, or where two dinosaur skeletons were merged into one fossil or exactly which bone (thigh/spine/tail…) we were looking at. We learnt that the darker stones that we were standing on were part of the devastating meteor that had caused the fossilisation years ago. The whole place came alive. We couldn’t help but sense the majestic presence of the mighty beings who had walked this land millions of years before us…

More adventure followed. He took us next to what looked like the fruit of a walnut embedded in stone. The smooth walnut, replete with the ridges, he confirmed was a fossilised dinosaur brain! This fossil park, spreading over 72 hectares, is also the largest fossilised dinosaur hatchery in the world, housing thousands of fossilised dinosaur eggs.Though many have been removed and placed in various locations of the Geological Survey of India, but some are still here and one can request the guide to take one there. The ground is still strewn with fossilised half eggs with the perfectly circular rings showing clearly. 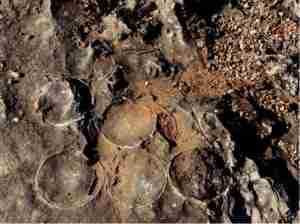 Some of these fossils from the Cretaceous age are of dinosaurs that lived and perished exclusively on Gujarat soil. Hence, one of them has been named Rajasaurous Narmadensis (Raja: skull had a crown-like bone; Narmada: some fossils were found on the river bank).

The park was discovered as late as in the 1980s when geologists came looking for lime reserves for a cement plant. The development of the park has unfortunately been stuck in bureaucratic logjams till now, but things appear to be speeding up and most of the area we walked on will be out of bounds, only to be seen from a distance. But there’s still time for that and maybe that’s why this treasure in the sleepy Gujarat village has been a secret for so long.

Ms. Aarti Pathak is an Economics professor, a writer and a nature lover who looks forward to travel. She is Editor at Bonobology.com and blogs at sparrowtimes.wordpress.com.

Wonderful reading this article. Did not know about the dinosaur museum. Very well written.