Mt. Bhagirathi-II is located in the Garhwal Himalayas in Gangotri National Park. The 6512 meters high peak rises right above the Gangotri glacier which sets new challenges for the climbers. The summit is challenging owing to its technical requirements, vertical ascents, inclement and unpredictable weather conditions. It thus remains a true test of the climbers’ technical acumen in mountaineering, as also of the climber’s mental strength and physical courage. 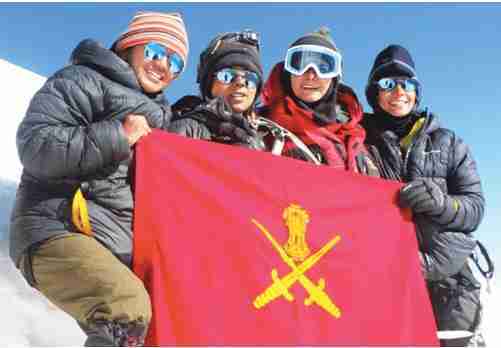 It was in this spirit that the Indian Army Women Officers’ Mountaineering Expedition to Mt. Bhagirathi-II was conceived. Consisting of nine women officers, led by Colonel Omender K Pawar, the expedition was flagged off by Director General of Military Training on 14 May 2018. While scaling the peak was the immediate objective, the expedition also aimed to encourage women in the field of adventure where dauntless courage, will- power and determination is put to test. And in this endeavour, the Indian Army women officers were set to lead the way.

While trekking to the base camp, the team encountered a civil expedition team of BARC (Bhabha Atomic Research Centre), who were returning from their expedition. They could not scale the peak due to thick layers of uneven snow and rock in the last 1500 feet. But this did not deter the women officers who true to Army tradition, ventured out where others fear to tread, and who make possible what others deem to be impossible. And so, in a magnificent feat, all the members scaled the mighty Bhagirathi II peak on 11 June. 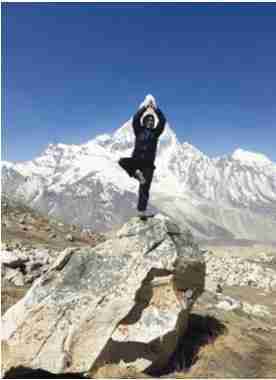 Besides scaling the peak, the expedition also practised Yoga at a height of 19,022 feet, setting a new world record for doing Yoga at such an altitude. The earlier record too, was set by the Indian army, which performed Yoga at 18,880 feet in the Siachen Glacier. The achievement of the women’s team was thus commendable and a fitting message ahead of the World Yoga day which is commemorated on 21 June. Well done ladies. You have shown your mettle once again.

In May 2017, the Government approved the policy on strategic partnerships in defence sector, and the same was made part of the defence procurement procedure (DPP), the guiding framework of making military equipment in India. In July 2018, the Defence Acquisition Council (DAC) gave the green signal to the guidelines for operating the ‘strategic partnership model’ policy under which foreign companies can partner Indian companies to produce military equipment locally. The ‘SP model’ simply put, is a mechanism which allows an Indian private company to collaborate with a foreign partner and produce military equipment in India. India’s attempt to join the nations producing world-class military equipment hinges on this model, in which four crucial military items are listed: fighter jets (both for the Navy and IAF), submarines, helicopters (for all three services) and new-generation tanks. 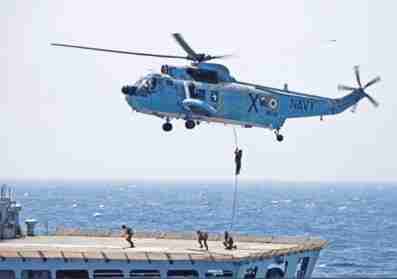 The DAC, which is the highest decision-making body of the Ministry of Defence, is chaired by the Defence Minister Nirmala. The DAC has now approved specific guidelines for procurement of naval utility helicopters. The Navy is looking for 111 such copters that will be based on ship-decks to replace the ageing fleet of Kamov copters. The guidelines provide incentives for foreign companies that transfer niche technology and provide for higher indigenous content. In addition, all procurements under strategic partnership would be executed by specially constituted Empowered Protect Committees to provide focused attention and ensure timely execution

The Army resumed trials of the U.S.-made M777 Ultra-Light Howitzer (ULH) in Pokhran firing range in July and the same will continue till end August. The trials were suspended last September after barrel of a gun burst during firing. 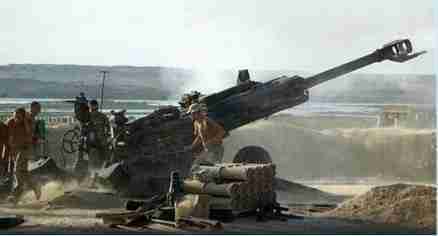 Four guns have been received from the US for the purpose of trials. Local ammunition is being used for the tests and tentatively 100-150 rounds will be fired during the tests.

The M777 was purchased from the US in 2016, under the Foreign Military Sales (FMS) programme at a cost of $737 million. Following this, two guns were delivered for calibration and making range tables with local ammunition when the barrel burst occurred. The trials have been suspended since.

As the deal was through the FMS, the trials will be conducted by the U.S. government and India will be an observer. Following the trials, the Army will take formal custody of the guns.

A preliminary investigation after the incident had found faulty ammunition supplied by the Ordnance Factory Board (OFB) to be the cause of the accident. After the trials are complete, the first batch of M777 will be handed over to the Indian Army.

The M777 is a 155 mm, 39-calibre towed artillery gun made of titanium and aluminium alloys and weigh just four tonnes, making it transportable under slung by helicopters. Of the 145 guns, 25 will be imported while the remaining 120 will be assembled in the country in partnership with Mahindra group. Deliveries are slated to commence in March 2019. In late January/early February 1999, the Pakistan military launched “Operation Badr,” with a view to dominate the Kargil heights. The plan was to initially avoid confronting the Indian forces by moving stealthily along the gaps not held by the Indian Army. Thereafter, after consolidating their positions by the latter half of May, they were to disclose themselves and demonstrate that they were in control of the heights along a ‘new LOC,’ before the opening of the Zojila Pass. As per the Pakistan military assessment, Indian forces would need time to assemble their forces, acclimatise their troops and build up their logistics which would be difficult before Zojila opened. They would also have to suffer unacceptable casualties in attacking the heights. This would ensure time enough for an internationally arranged ceasefire, leaving Pakistan in control of the heights.

As a tactical plan, it was brilliantly conceived and executed. The strategic premise on which Pakistan based its plan was however flawed on two counts. First, it underestimated the Indian will to fight and recover the territories taken by the infiltrating force. Second, it was premised on the hope that the major powers would force an early ceasefire to prevent the conflict from degenerating into a nuclear exchange, leaving Pakistan in control of the heights. That strategic miscalculation was to be the undoing of Pakistan. By July the infiltrators were driven back from most of the localities they held and India only agreed to a ceasefire on the condition that Pakistan withdraw its forces behind the LOC, effectively restoring the status quo ante. Across the country, the sacrifice of the brave Indian soldiers was remembered by people from all walks of Life. In Delhi, many events were held to mark the occasion, but two of them merit special attention.

In memory of the martyrs, a bike rally was organised in Delhi on 22July 2018 by riders of “The Harmony of Riders” (THOR), where more than 350 bikers participated in the event. They were led by two of the heroes who took part in this conflict, Captain Satendra Sangwan and Group CaptainSatish Dhawan, VSM. The bikers started their journey from the Netaji Subhash Place and passed via Wazirpur Ring Road, Rajouri Garden, Naraina, Delhi Cantonment, Palam Airport flyover and finally reached Dwarka Sector 18—A stretch of about 30 kms. At Dwarka, the riders were welcomed by the residents of Vir Vijayi Awas. These houses were allocated to the martyr families of Kargil war by the Government of India and the national flag was hoisted by the RWA President Bhawna Dwivedi. Col RSN Singh was the Chief Guest for the function, while Brig Narendra Kumar, SM, VSM, was the Guest of Honour on the occasion. Another place where the event was commemorated in a grand manner was by Select Citywalk, a premium shopping centre in Delhi. To inculcate a sense of patriotism and to highlight the achievements and sacrifices made by the Indian Armed Forces, the Kargil Vijay Divas is commemorated annually by public spirited individuals at Select Citywalk. This initiative was started six years back by Shri Inder Sharma. the Chairman and also a Padma Shri awardee. After he passed away, the event continues to be organised by his son and present Chairman, Mr Arjun Sharma. As per the Chairman and the Directors, Mr Yog Raj Arora & Mrs Neeraj Ghei, they host the event to “Salute the courage of our soldiers and their families”. This year, the parents of a large number of war heroes were felicitated, to include among others, the parents of the late Capt Vikram Batra, awarded the PVC posthumously and the late Capt Vijayant Thapar, VrC (posthumous). The occasion was graced by Mrs Madhulika Rawat, President AWWA, and wife of Chief of Army Staff, General Bipin Rawat who was the Chief Guest for the event. She was accompanied by Mrs Anbu, Wife of the Vice Chief of Army Staff and Mrs. Vandana Sharma, wife of the Adjutant General, amongst others.All across the country, in towns big and small, Kargil Vijay Divas was commemorated by the Armed Forces as also by the citizens of India. This is a positive trend and hopefully will act as a motivator for the youth of our country.