In 1064 CE, King Bhima Dev passed away. He was a member of the Chalukya dynasty and ruled over parts of present-day Gujarat. Born in 1022 CE, the King had but a short life span of 42 years, but he was well loved by his subjects and it was in his memory that his beloved wife, Rani Udayamati commissioned a step well, on the banks of River Sarasvati in the Patan district of Gujarat. Called Rani ki Vaav, it is considered one of the finest stepwells of India today. 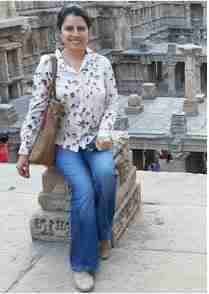 This east facing stepwell is surrounded by lush green lawns, healthy thriving trees and clean air. Excellently maintained by the Archeological Survey of India (ASI), we saw many families sprawled out in the relaxing ambiance of the greens, leading up to the Vaav. While admiring the scenic settings, we overheard a child exclaim, “Are we in India or abroad?” That seemed to sum up the general mood of the place. 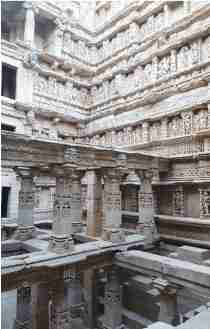 The Stepwell itself is 68 meters long, 20 meters wide and 100 feet deep.It has seven stories and can be likened to an inverted temple. Like all the Vaavs of Gujarat, Rani Ki Vaav also has spiritual significance. There are around 800 well preserved sculptures in the Vaav, many of them depicting scenes from the holy books of Sanatana Dharma. Depicted on the walls are the ten Avatars of Lord Vishnu—Matsya, Kurma, Varaha, Narasimha, Vamana, Parasurama, Rama, Krishna, Buddha and Kalki. Also found are numerous sculptures of Brahmins. It is also fascinating to find depiction of the “Sringaar Ras” presented through the sculptures of apsaras applying makeup or wearing jewellery. Amongst the captivating sculptures is one of an apsara wearing slippers which look like the kind we wear today!

Going deeper into the Stepwell is a pleasant experience. The scientifically designed (and brilliantly carved) pillars keep the air through the downward walk cool and pleasant. And when one reaches the base, at the water level is an astonishingly beautiful sculpture of Lord Vishnu, reclining on the thousand headed Sheshnaag. Rani Ki Vaav is thus a fascinating amalgamation of spirituality, functionality and aesthetics, highlighting the exceptional talent and knowledge prevalent at the time. Even by today’s standards, the Vaav is an architectural marvel.

The Rani Ki Vaav has seen a few hundred difficult years too, reflective of the history of the region. Somewhere down the line, the Sarasvati River had flooded and completely silted it. It stayed hidden and preciously preserved against attacks, hate and vandalism, right till the 1980’s, when it was excavated and taken over by the ASI. Today, it is a protected monument of national importance. To ensure that it remains preserved, it is enveloped by a non development zone on all sides to prevent harmful construction work in its vicinity. In October 2016 it was declared “Cleanest Iconic Place” in India at the Indian Sanitation Conference (INDOSAN). It was also added to the list of UNESCO’s World Heritage Sites on 22 June 2014. Often during travels across India, one comes across, ‘pyaau’s built by common people in memory of someone they loved. As I sat on the steps of the Vaav, I thought, what better way to remember a loved one than by creating something of value that could be beneficial to humanity even years after we’re gone. And what more precious a gift than of water, vital for sustaining all life on Earth. A few days back an item on my Facebook feed caught my attention. I blinked furiously to be sure that what I saw was true. The image of the Rani ki Vaav, has found pride of place in Indian currency. It now graces the new one hundred rupee note, a denomination that will be circulated far and wide, bridging the gap between wallets, both big and small.

When we were leaving, our guide for the trip remarked, ‘Rani ki Vaav, Vaavo main Rani hai,’ a soft pride reflecting in his eyes. A millennium down the line, the legacy of Rani Udayamati endures.

Aarti Pathak is a mother of two young children and resides in Vadodara, Gujarat. A prolific writer she is presently, C.E.O. and Editor at Bonobology.com. She blogs at https://sparrowtimes.wordpress.com/