In the evening of my first day in NDA, I was debating the possibility of hotfooting it to the wet canteen to have a snack and was moving as quietly as possible to avoid attention. I wasn’t speaking. But it didn’t matter, my long hair was.The squadron orderly confronted me right outside the squadron commander’s office. He was polishing the brass door knob with a piece of rag as if it was a sculpture by Rodin.

Orderly Pawar was wearing a white ceremonial tunic of an old discarded naval uniform, which made him look like some sort of half-Admiral. He looked at me with a dry and disdainful air, as if he was measuring me up for the right size of coffin. Then he led me into the ground floor lobby bathroom and after obtaining a brief introduction from me began to advise me, with eyes glowing like embers and his hand stroking his unshaven chin. “You need to have a haircut first.” I nodded with quiet contrition.

Then he lowered his tone, as if he were revealing a secret from an official inquiry. “When bathing, take off all your clothes” I began to protest but he gave me a smile that clarified the order of things in the world without any need for words.

“And don’t ever think of smoking or drinking in the Academy premises” he advised me as a parting shot. My palate had never gone beyond the subtleties of the different vintages of tap water, so I shrugged my shoulders.

“Get a haircut,” he repeated “It’s a cure for everything, except stupidity, which has become an epidemic among First Termers in this Academy” he lamented. This he said in Marathi, with all its nuances and with extra emphasis on the Marathi words ‘Cha Aaila…’ I nodded briefly, fighting the tide of nausea that was beginning to rise up in my throat. Then he lit a beedi with twice the enjoyment as one relishes all forbidden things, before dismissing me. Just as I began working my way to the barber’s shop, he shouted out from behind me, “Tell Sharma Ji to give you a haircut, he’ll make you look like Rajesh Khanna!”

At the shop there were three barbers dispensing haircuts with Nazi precision. All three had cruel smiles on their faces. I had no clue what an NDA haircut looked like but when I got to see the first one I understood that in the world of haircuts, this one was pure opera. In less than two minutes the first barber had converted a Second Termer’s head into a Koenigsegg, which, in the dim light of the shop, began to look like a Tank-Buster. When the boy stepped out of the Barber’s shop he looked ready for a spot of pugilism with a newbie like me.

The clipping machine that the barber was using was huge, like something from the emergency towing gear of an aircraft carrier. It was noisy, so noisy that I could hear it clunking above the clipping noise of the two pairs of scissors being used nearby. I decided to skip this guy, as I watched with horror the Swedish tidal wave cruising around the cadet’s head knocking off every strand of hair in its path.

The second barber was small, squat, and affected an oily, sibylline smile, and he seemed to be the brains of the haircutting operations going on there. He was delivering instructions in a funereal tone to a motley group of cadets waiting in line for their haircuts, while displaying a rare talent for chopping off hair that any barber in his profession would have envied. I decided to skip him and joined the line for the last guy.

The third guy looked more like a chartered accountant who was much better at cooking-the-books than delivering a katori-cup haircut. He was also telling stories to his clients thereby displaying a rare talent for fiction, while his scissors were doing their job. I guessed this must be Sharma Ji.

Finally it was my turn in Sharma Ji’s queue to take the chair. Sitting in the cockpit-like wooden chair, strapped in by the oversized armrests, I felt like I was sitting in the control room of PNS Ghazi, that was being depth charged during the ‘71 war. Sharma Ji walked round my chair and rested a hand, heavy and large as an anvil, on my shoulder while looking at everything on my head with a baleful air. His examination lasted a few seconds, during which I maintained a reverential silence.

Sharma Ji looked at me with little enthusiasm. It wasn’t hard to imagine the impression my modest long hair had made on him. Then he asked, as if administering my last rites, ‘What would you like?’ i wanted to say, “A beer” but my mouth was as dry as sandpaper. ‘A haircut,’ I said, improvising. And everyone burst out laughing in the shop.

While he chopped at my hair, he spoke to me about his unfinished novel, about his plans for retiring and about his romances and conquests. He finished with me in less than two minutes and gave me one of those unctuous smiles before waving me off the chair. 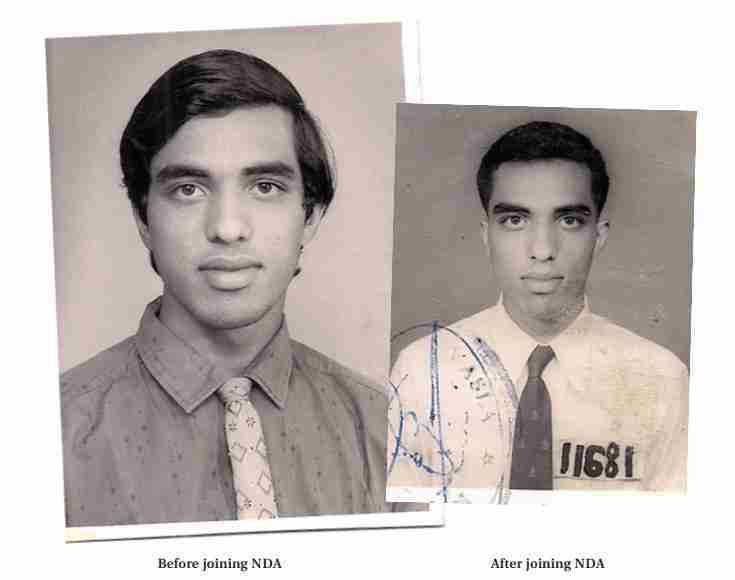 A quick check in the mirror told me that Sharma Ji’s haircut wasn’t all brute force and barnyard use of scissors and comb. He had managed to give me an elegant and muscular haircut all at the same time, combining the appeal of Forrest Gump and the Terminator. I was looking for hints of Rajesh Khanna but I didn’t find any. My head didn’t look as tempting as a chorus girl’s backside, but it gave my personality a mean and frightened look. I emerged from the party feeling light and carefree and wondered what the hyenas back at school would think. I stepped out of the barber’s shop and walked back to the Squadron as if I was walking on the street with a traffic cone on my head.

The NDA haircut is daft and not very relevant in the modern world. But if you’ve had it for three years in a row, it’s my bet that you’ll keep asking your local barber for more of it, even if your wife and kids object.

Captain Anil Gonsalves, I.N. joined NDA in 1975 and passed out with the 54th course. He specialised in Anti-submarine warfare and was Fleet ASW Officer. He commanded CGS Rajshree and INS Mahish. After leaving the Navy prematurely, he joined the Offshore Division of Shipping Corporation of India and commanded a number of Platform Support Vessels and top-of-the-line Dynamic Positioning Vessels. He is now fully retired and lives in Pune.