The geological creation of the highest pinnacle on planet earth and that of subcontinent India per se are inextricably coterminous with the tectonic collision in the Southern Hemisphere of the break-away Gondwanaland mass with mainland Asia, aeons ago.

Yet, in the realm of recorded history, the precise geographical determination of that ultimate pinnacle is very much of our times; both its acknowledged, magical moment-in-time as also the subsequent assignation of a name lie ascribed to the offices of the Survey of India, Dehra Dun in 1848! For, in a corner of his spacious office, Captain Andrew Scott Waugh (later Maj Gen), who served as the Surveyor General of India from 1843 to 1861, studied the plethora of instrumental observations and the resultant mathematical computations which intersected each other inside a one inch square space of a grid sheet but not at one common point. In the event, Waugh was contemplating how best to unravel what the surveyors call the Cats-Cradle! After much deliberation, and summoning his Indian Army discipline and integrity, Waugh marked a sharp dot, circled it and wrote on the margin “Peak b and possibly the highest mountain in the world, in Tibet.” 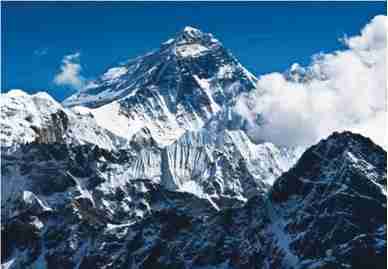 For the moment, Waugh’s assertion raised no eyebrows. Six years later Waugh further added that, Peak b was worshipped in Tibet as Chomolungma and in Nepal as Sagarmatha, both names translating into English as “Goddess Mother of the World.” But the world at large would truly sit up in astonishment only in 1856, when Waugh announced the mathematically computed height of this latest summit unequivocally at 29,002 feet ASL! And, in 1865 Peak XV would be conferred the name Everest — a name given by the Royal Geographical Society, upon a recommendation by Andrew Waugh, the British Surveyor General of India. As there appeared to be several dif-ferent local names, Waugh chose to name the mountain after his predecessor in the post, Sir George Everest, despite Everest’s objections.

Some seven decades later, the first man who came within a whisker of the Everest summit on 05 June 1924 was the immaculate Indian Army officer, Lieut Colonel E.F. Norton, DSO, Royal Horse Artillery. But the effort had to be aborted when his companion Dr Somervell dropped out on account of an acute throat inflammation and bleeding. Norton persevered alone for over an hour before wisely, turning his back on Everest. No one could better their achievement till the fateful morning of 29 May 1953 when Tenzing held aloft his ice axe, flags of UK, India and The Alpine Club flut-tering from its shaft, and Hillary froze that image on camera film for posterity. 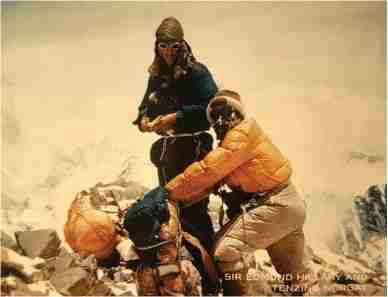 Now, the 1953 British attempt on Everest was partly sponsored by The Times, London as indeed were all Expeditions beginning with 1921. But this time the stakes seemed higher than usual. For, the correspondents of The Daily Telegraph and The Daily Mail positioned themselves at Kathmandu and indulged in Oriental intrigues, to be “the first with the news.” With an element of mischief and deception, James Morris of The Times devised a secret code to cover the names of the climbers, of success, failure etc. And two Sherpas practically ran the distance of 48 km, handed in the message to the radio-operator at the Nepalese Police check- post at Namche and collected a bounty of Pounds thirty!

The coded message sent by Morris deliberately read like a failed attempt (“Snow conditions bad stop Advance Base abandoned May Twenty Nine stop Awaiting improvement stop All Well”) but when decrypted in London at 4.15 pm on 01 June, 1953 it in fact read “Everest climbed Hillary Tenzing May29!” Just as “hot tears had sprang to the eyes” at the Base Camp, so presumably they did at The Times, London office. Be that as it may, the Editor was in a quandary whether to break the news in their evening edition or keep it “hidden” till the Queen’s Coronation, the next morning? Buckingham Palace approved the latter option, and the rest is history.

Within the month, the British Monarch would personally felicitate Sir Edmund Hillary and Tenzing Norgay, at the Buckingham Palace. King Tribhuvan of Nepal presented him with the Order of the Star of Nepal in 1953 and India awarded him the Padma Bhushan in 1959.

The Indian Air Force had already provided a layer of icing on the Everest cake by flying two Westland Liberator Bombers especially fitted with cine and still cameras, for over an hour each on 06 and 07 June, 1953 to film the outstanding documentary, “Conquest of Everest” which received accolades, the world over.

Sadly, in the last three decades the ascent to the summit of Everest was first reduced to a vulgar commercial enterprise (US $ 60.000/- per head) and lately made a pawn of petty, political, power-play when the Chinese Government laid claim to the entire Everest massif. The moot point which remains unaddressed is whether in the process man would have simply vandalised the mystique surrounding the summiting of Mount Everest by sportsmen, forever?

Commissioned in the Regiment of Artillery in July 1956, Lt Gen. Baljit Singh, AVSM, VSM, retired on 31 July 1992 after 36 years of distinguished service. A keen sportsman, accomplished writer, and noted environmentalist, he is an active promoter of Conservation of Nature, more so within and by the Armed Forces.

JITTERS FOR SEPARATISTS AND THEIR SUPPORTERS IN KASHMIR VALLEY