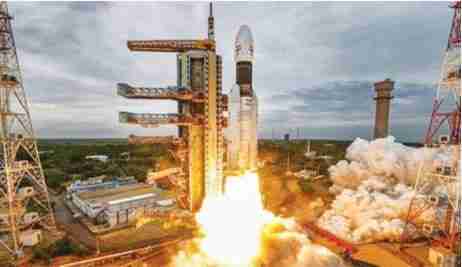 At 2.43 pm on 22 July 2019, Chandrayaan-2 was launched into space from the Satish Dhawan Space Centre, Sriharikota, in Andhra Pradesh. The launch vehicle used for Chandrayaan-2 was the GSLV Mk-3,—India’s most powerful rocket being used on its first operational flight! The rocket carried an orbiter, lander and a rover in this, the second bid by India to uncover the secrets of the moon. Just over 16 minutes after take off, the rocket placed the moon craft in the earth transfer orbit, thus successfully completed the first of many complex manoeuvres that would be required to land the moon craft on the moon in early September. Successful accomplishment of the mission, would make India only the fourth country in the world to accomplish a moon landing after the United States, Russia and China. The first time that a soft landing was made on the moon was on 9 January 1966, by the Soviet mission Luna-9.

The 3.8 tonnes Chandrayaan-2 spacecraft, which is being carried by the 44-m tall, 640-tonne GSLV-Mk III , consists of three segments—the Orbiter (weighing 2,379 kg with eight instruments), the Lander, Vikram (1,471 kg with four instruments) and the Rover, Pragyan (27 kg with two instruments). GSLV Mk III is a three-stage launch vehicle. The first stage consists of two strap-on motors powered by solid fuel. The second stage is powered by a liquid fuel and the third stage is a cryogenic engine.

The idea of an Indian scientific mission to the Moon was first mooted in 1999 during a meeting of the Indian Academy of Sciences. Later, Indian Space Research Organisation (ISRO) set up the National Lunar Mission Task Force which made recommendations for India’s first moon mission, which was approved by the government in October 2003. This led to the launch of Chandrayaan-1, India’s first moon mission on 25 October 2008. The mission included a lunar orbiter and an impactor and remained operational till August 2009. While the mission ended a year before schedule, the pathbreaking work done for Chandrayaan-1 laid the foundation for the launch of Chandrayaan-2.

Chandrayaan-2 will carry out a number of complex manoeuvres, beginning with the first transfer to the earth’s orbit, and thence to increasingly larger orbits till it can be placed on the moons orbit using its onboard thrusters. Thereafter, the orbits of the moon will be reduced till the robotic rover can be soft landed on the moons surface. For the landing, the lander will detach from the orbiter and choose a right spot for landing.

Understandably, the mission is extremely complex, and highly risk intensive. The technology and software have all been indigenously developed which speaks volumes about the capabilities of Indian scientists. As per Mr K. Sivan, Chairman ISRO, the soft landing manoeuvre will be the most critical and crucial stage of the operation. A soft landing means igniting an engine at the right altitude and angle to the moon to begin a “retrofire,” in order to decelerate the lander upon the moon. Once landed, the rover will roll out and perform experiments. This will take place 50 days from the launch date, when the rover is placed on the moon’s souther surface—an area which hitherto has not been explored.

Reacting to the launch, Prime Minister Modi tweeted: “Indian at heart, Indian in spirit! What would make every Indian overjoyed is the fact that #Chandrayaan2 is a fully indigenous mission. The launch of #Chandrayaan2 illustrates the prowess of our scientists and the determination of 130 crore Indians to scale new frontiers of science. Every Indian is immensely proud today.” That sentiment was reflected by every Indian, for the mission represents a giant leap in India’s technical prowess, and would have many spin off benefits in other sectors too, including defence.

MAKE IN INDIA GETS A BOOST

Robot ‘Daksh’ handed over to army