On the last day of 2018, India’s Light Combat Aircraft (LCA) Tejas received A new ‘limited’ clearance from Centre for Military Airworthiness & Certification (CEMILAC), a laboratory of the Defence Research and Development Organisation. With this, the Tejas has progressed towards manufacture in an enhanced, battle standard format.

Of the 40 LCA being manufactured for the IAF by HAL, 20 are being manufactured in the Initial Operation Clearance (IOC) version and the next 20 in in Final Operation Clearance (FOC) version. The latter version adds many features over the IOC version and indicates that the fighter is fully equipped and fit for battle. However, as the Limited Clearance implies, Tejas is still some distance from being given FOC standard clearance. It appears that this was done to speed up production and keep HAL’s idling facilities engaged and that further improvements would follow in the ‘FOC-2’ phase. Some officials also stated that what has been given is ‘almost-full’ FOC and that very few additions can be added later. To get the final FOC certification, the plane must have battle-time requirements — such as mid-air refuelling, AESA radar, electronic warfare suites, a variety of bombs and weapons, among others. As of now, it has passed mid-air refuelling and armament testing.

The IAF demonstrated its airlift capability in a massive exercise on 18 December 2018, when it airlifted a record 463 tons of military loads in a single wave from the Chandigarh airbase to airfields and drop zones in the Ladakh region. The mission was accomplished in under six hours with a fleet of 16 transport aircraft. These included the recently procured heavy lift C-17 Globemaster from the US, the IL -76 Gajraj and the medium lift tactical aircraft, the Antonov-32. The routine airlift by the IAF to Ladakh is about 3000 tons, so the exercise was intended to showcase IAF capability to enable a rapid build up in a high altitude area and to logistically support troops from the air. 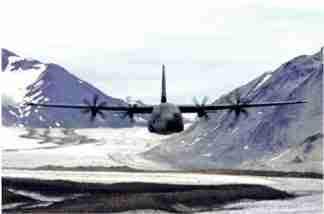 The IAF exercise is being viewed in the context of providing support to the Army in the event of a conflict situation developing on the India-Tibet border and is intended to show case preparation for short duration high intensity wars. In any conflict in the high altitude areas, rapid airlift assumes greater significance and the present exercise was to test IAF capability in the same.

In line with the statement by the CAS, Air Chief Marshal B.S. Dhanoa on 27 July 2018 that the IAF intends to promote biofuels, the first test flight using biofuels was carried out on 17 December 2018, by the Experimental Test Pilots and Test Engineer from IAF’s premier testing establishment ASTE. For the first time, a military flight was flown using blended bio-jet fuel on an An-32 transport aircraft. The project is a combined effort of IAF, DRDO, Directorate General Aeronautical Quality Assurance (DGAQA) and CSIR-Indian Institute of Petroleum.

Since the statement of intent given by the Air Chief during the CII-SIDM seminar on promoting indigenised technologies, the IAF has carried out extensive engine tests on the ground, which were then followed by the above test flight using 10 percent biojet blended ATF — a fuel made from Jatropha oil, sourced from Chattisgarh Biodiesel Development Authority (CBDA) and then processed at CSIR-IIP, Dehradun. The IAF intends to fly the An-32 transport aircraft using biojet fuel on 26 January 2019, in the Republic Day flypast.

MAKE IN INDIA RECEIVES A LEG UP

In December 2018, Deputy Chief of Air Staff, Air Marshal VR Chaudhari issued the Project Sanction Order (PSO) of Make-II project, Chaffs and Flares, to five Indian Development Agencies in a ceremony held at Vayu Bhavan. This is the first time that five private Indian companies will undertake design and development of equipment with their own R&D funds under the Make-II procedure. The project is to be executed within 52 weeks at the company’s cost. The company is eligible for protection of Intellectual Property Rights (IPR) as per Defence Procurement Policy 2016. Earlier, in October, in Bengaluru, the Department of Defence Production under the Ministry of Defence had cleared 31 projects and has given them in-principle approval under the Make-II scheme, which is an industry-funded scheme that offers easier clearance and faster scaling-up of production. This has seen faster development than any of the ‘Make projects’ that have happened so far, as per Ajay Kumar, Secretary, Defence Production. Kumar further added that another scheme—SPARK(Support for Prototype & Research Kick-start), supports development of prototypes after selection under various programmes.

IAF HOLDS JOINT EXERCISES WITH US AND RUSSIA

The Indian Air Force held near simultaneous joint exercises with the US and Russia air forces in the eastern and western sectors of the country respectively. In the East, at the Kalaikunda Air base in West Bengal, the IAF carried out Exercise Cope with the USAF. This was a two week exercise which began on 3 December and terminated on 14 December. During the course of this exercise, both the IAF and USAF practiced airborne assaults on ‘enemy’ territory using their C-130 aircraft as well as manoeuvres involving the SU-30MKI, Mirage-2000 and Jaguar fighters from India and the F-15s from the USAF. In Cope India, 12 USAF F-15 C/D air superiority fighters and three C-130s participated. This was the fourth edition of the Cope India exercise. 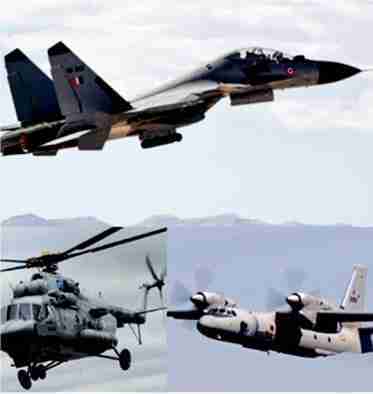 With Russia, Exercise Aviaindra was carried out with the Russian Federation Aerospace Force in the Jodhpur air base in Rajasthan from 10-21 December. Aviaindra was a unique exercise in which the Russian participants did not bring their air assets but flwe Indian fighters. This was the second phase of the exercise, the first phase having been completed at Lipetsk, Russia, in September. During the first phase, IAF pilots flew Russian Air Force aircraft. The exercises include a counter-terrorism scenario, and as per a tweet by the IAF, the joint exercise with Russia primarily focused on counter-terrorism operations.

Winter had set in and Nathu La in Sikkim is biting cold at this time of the year. It is also a time when tourists flood the area. And when tourists were returning from Nathu La Pass and Tsomgo (Changu) lake, it began snowing in the upper ridges of Gangtok. The date was 28 December and the time was around 4.30 pm. And soon, the road was blocked leaving about 400 vehicles stranded in the bitter cold. This was the first time since February 2008 that this part of Sikkim received such heavy rainfall, and to rescue the stranded tourists, the Army was called in to help.

The Army was quick off the block and immediately swung into action. The stranded passengers, at various points on the Jawahar Lal Nehru road were evacuated and taken to the Army camp at Mile 17. The tourists were provided warm clothing, shelter, hot meals and medical aid, in what can only be described as a spontaneous rescue mission. 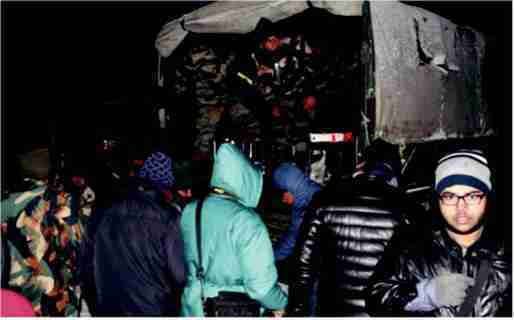 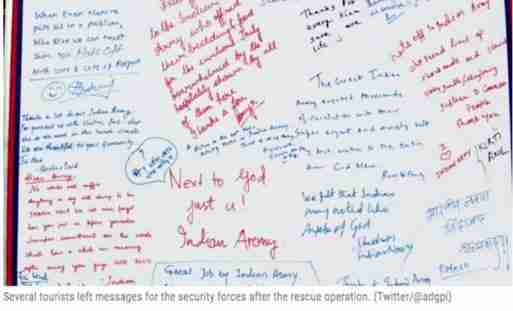 The Indian Army, is truly India’s Army. Well done to all ranks who performed their duties with selfless thought and zeal, bringing succour to the people and honour to the uniform.