3 June 2018 was yet another red letter day in the history of India’s missile programme, when Agni-V, with a range of 5000 km was successfully launched off the Odisha coast. The surfaceto-surface missile was launched with the help of a mobile launcher from Launch Pad 4 of the integrated test range (ITR) at Dr Abdul Kalam Island in the Bay of Bengal. 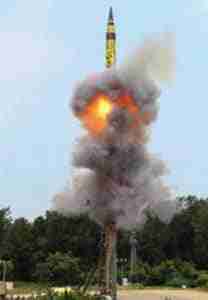 For project Director G Ramguru of the Advanced Systems Laboratory and for all the defence scientists associated with the project, it was a moment for jubilation when the missile was test launched successfully, with all mission objectives being achieved. As per one of the scientists working on the project, it was a “text book precision launch, where every single objective was met”. This was the sixth test carried out, but one more final test will be done before the missile is inducted into the Strategic Forces Command.

Agni-V is a nuclear war-head missile which, with a range of 5000 kms, is at the lower end of the ICBM scale. First test fired in April 2002, Agni-V can cover all of Asia and parts of Europe and Africa. The ‘mission critical’ avionics for Agni V were designed and delivered by the APJ Abdul Kalam Missile Complex in collaboration with the Advanced Systems Laboratory and the Defence Research Development Laboratory (DRDL), Hyderabad. The canister launcher of the missile has been developed by Ahmednagar-based Vehicle Research and Development Establishment (VRDE) while high energy materials composition for boosters were developed by the High Energy Materials Research Laboratory (HEMRL).

KAMOV HELICOPTERS FOR THE MILITARY

In December 2015, when Prime Minister Modi visited Moscow, an inter-government agreement between India and Russia was signed for the supply of the Kamov helicopters to India. A year later, India and Russia finalised a broad agreement to set up the joint venture (JV) between Russian Helicopters (RH) and Hindustan Aeronautics Limited (HAL) to co-produce the helicopters as replacement for the ageing fleet of the Cheetah and Chetak helicopters currently in use. 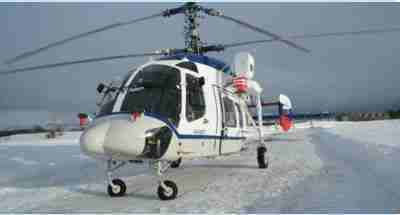 A Request for Proposal (RFP) was issued by the MoD in May 2018 for the above Indo-Russian joint venture. This is likely to be responded to by HAL-RH by end of August and the final deal is set to be signed in October to procure 200 Kamov Ka-226T military helicopters over nine years. Of these, 60 helicopters in flyaway condition will be produced in the Ulan-Ude plant of RH, while 40 will be assembled in the proposed plant set up by the joint venture. The remaining 100 will be completely made in India. HALs stake in the JV is likjley to be 50.5 percent while that of RH will be 49.5 percent.

The technical configuration for the twin-engine multi-role helicopter which is known for its superior manoeuvring capabilities in mountainous areas have already been approved, the groundwork to finalise the project has been completed and the deal will in all probability be completed this year. The deal comes with transfer of technology.

THE S 400 DEAL: CHALLENGES AHEAD

As an Air Defence System, the S-400 Triumf (Russian: C-400 Триумф, Triumph; NATO reporting name: SA-21Growler) has been described by various analysts as one of the best air defence systems in the world. Developed as an anti-aircraft weapon system in the 1990s by Russia’s Almaz Central Design Bureau, this fourthgeneration long-range missile defence system has been in service with the Russian Armed Forces since 2007. The system has four missiles, with varying ranges: 400 km, 250 km, 120 km and 40 km, to cover the entire gamut of envisaged threat. Its command post and several radars can track several dozen incoming objects simultaneously at distances of hundreds of kilometres and launch counter-missiles within seconds to eliminate the threat with very high level of probability. India has been pushing for the S-400 Triumf to enhance its air-defence capability. Negotiations for the USD 5.5 billion deal have been concluded and a draft CCS note is under preparation. But the deal may run into rough weather, due to sanctions imposed by the US on Russia, which if violated could adversely affect transfer of US military technology to India. These sanctions had been imposed in January 2018, under CAATSA (Countering America’s Adversaries Through Sanctions Act), in retaliation against Russia’s alleged meddling in the US presidential election in 2016. CAATSA mandates the US government to punish countries and entities engaging in significant transaction with the defence or intelligence establishment of Russia. US concerns also hinge on the fact that the S-400 needs to be integrated with other air defence systems and components which are in use in India. As some of these have been bought from the US, the required levels of integration may lead to security concerns, wherein a third party could potentially access some of the technologies provided by the US.

It is however on the cards that the US will acquiesce to the purchase as enhancement of Indian capabilities fits in well with the shared India-US goal of having a deterrence against Chinese aggression in the region. In the recent meeting of the Indian Premier, Shri Narendra Modi with President Putin of Russia in Sochi on 21 May, the two leaders had vowed to further strengthen Indo Russian cooperation and this deal will be a step in that direction. In any case, India wants its defence transactions with Russia to be insulated from the purview of CAATSA and will raise Indian concerns when the two sides meet in Washington for the 2+2 talks later this year.

India needs the S-400 to secure its long border with China. The Defence Minister Ms Nirmala Seetharaman stated that the S400 deal has been on for a very long time and that the two countries were in the final stages of negotiations. A rethink on the issue is hence unlikely. In all probability, the deal will be announced before the annual summit between India’s Prime Minister and the Russian President in October this year. Drones are increasingly being used by armed forces across the world for multiple applications. Drones have many civilian applications too, and as the technology is available, the possibility of their use by terrorist organisations remains high. Such threats are not far fetched as the IB has earlier warned of the possibility of such an attack in Delhi by terrorist organisations. The IAF has also given vent to concerns of such attacks.

With that in view, Bharat Electronics Limited (BEL), has developed a prototype, which has a radar and electro-optical and electromagnetic sensors, to track and destroy drones. As of now, the prototype is a low end machine, with a limited range of 3-5 km and a soft kill option in the form of a jammer, which can interfere with the drone’s electronics and radio frequency. It must be remembered that drones are remotely piloted, which means that they depend on signals from the pilot, which can be disrupted by jamming.

This could prove to be a useful addition in the armoury of the military and other security agencies and would represent a great leap forward in confronting emerging threats that are likely to manifest in the coming years.

A severe cyclonic storm, ‘Mekunu,’ reportedly one of the most intense tropical cyclones to make landfall in the Arabian Peninsula, hit the island of Socotra on 29 May, leading to flash flooding and devastation. In the island, were stranded 38 Indians, which led to the rescue mission codenamed ‘Operation Nistar’. 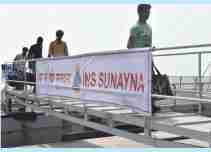 INS Sunayna, which was then in the Gulf of Aden was diverted to the Socotra Island for search and rescue operations, after a distress call was received from Directorate General of Shipping and Indian Sailing Vessels Association. All the 38 Indians were thereafter successfully evacuated on the morning of 3 June by INS Sunayna, which brought them safely to Porbander harbour on 7 June. Once again, a Humanitarian and Disaster Relief Operation (HADR) was successfully carried out.

Indian Naval Ships — Sahyadri, Shakti and Kamorta — of the Eastern Fleet under the command of Rear Admiral Dinesh K Tripathi, Flag Officer Commanding, Eastern Fleet currently on an overseas deployment to South East Asia and the Western Pacific, arrived at Guam on Thursday to participate in the 22nd edition of Exercise Malabar, off Guam, USA till June 16.

Exercise Malabar, which started as a bilateral exercise between the US Navy and the Indian Navy in 1992, has evolved over the years with the participation of the Japanese Maritime Self-Defense Force (JMSDF) from 2007. Over the last 26 years, this Maritime Exercise has grown in scope and complexity and aims at increasing the level of mutual understanding, inter-operability and sharing of the best practices between the three navies.

Malabar 17 was held in July last year on the Eastern Sea Board of India, off Chennai and Visakhapatnam. It is for the first time that the exercise is being conducted off Guam, a major US Naval Base in the Western Pacific. It would be of interest to note that the US has recently named their Hawaii-based Pacific Command as the U.S. Indo-Pacific Command. The scope of the MALABAR-18 includes professional interactions during the Harbour Phase in Guam from 07 to 10 June 18.The Sea Phase from 11 to 16 June 2018 includes a diverse range of activities at sea including Aircraft Carrier operations, Air Defence, Anti-Submarine Warfare (ASW), Surface Warfare, Visit Board Search and Seizure (VBSS), joint manoeuvres and tactical procedures.

DEPENDENCE ON FOREIGN COUNTRIES FOR ENGINES FOR...

FROM TOOFANI TO RAFALE: A LONG JOURNEY