But this did not happen in isolation. Consider this:

• Between April 8 and 22, the IAF nearly shut all its training and pulled out nearly 1400 of its officers and 14,000 men for a wargame. Almost anyone fit to fly was directed to make themselves available.

• In that period, nearly 1,100 of its aircraft were specially deployed across the length and breadth of the country on ‘operational duty’.

• So intense was the effort that fighter, transport aircraft, helicopters, Flight Refuelling Aircraft (FRA), Unmanned Aerial Vehicles (UAVs) put together generated a staggering 11,000 flights/sorties between them.

In conjunction with elements of the Indian Army and the Indian Navy, the IAF had mounted what many terms as one of its biggest-ever exercise. They named it ‘Gaganshakti 2018’.

“If war were to happen tomorrow, we would like to be in a position where we can sustain a high tempo of operations. Gaganshakti 2018 was where we tested ourselves extensively and results were satisfying,” said an officer aware of the intricacies of the exercise. While the exercise was initiated with a focus on India’s western borders, mid-way, the IAF repositioned its forces on India’s eastern frontiers. The message was clear. The IAF was publicly practicing for a two-front conflict. IAF: In the mountainous terrain the movement of the troops from one valley to another is a challenging task. The redeployment of forces from one area of interest to another may at times take couple of days. Inter Valley Troop Transfer operations help to reposition the desired forces within a couple of hours.

But, there is more to the story.

World’s fourth largest air force, the IAF, is operating with 31 squadrons of fighter jets whereas it needs 45 squadrons. Also, the IAF appears to be in deep financial trouble — from purchasing new equipment to maintaining the older one, the impact is pervasive. 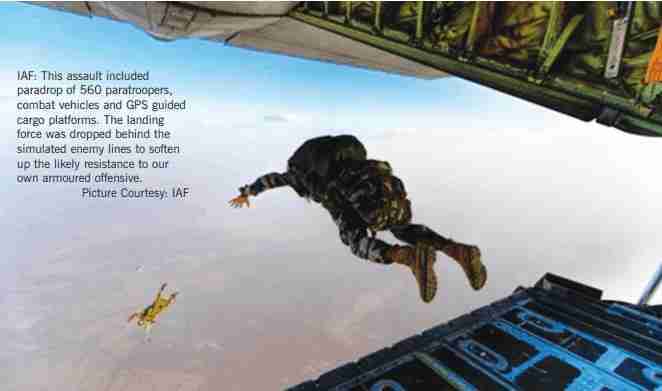 Parliamentary Standing Committee on Defence, headed by veteran BJP leader Major General BC Khanduri (Retired) tabled its forty-first report in Lok Sabha on March 13, 2018. Some salient points of the report are:

• (For 2018-19) Shortfall of Rs.6440 crore in the Revenue Budget is likely to impact the operational preparedness, ability to procure spares & fuel, apart from leaving gaps in training programs, serviceability of older systems and provision of basic amenities to the Air Force personnel.

◦ Allocations made under the capital head for the Air Force, which is largely accountable for modernization budget of the Service, has consistently plummeted. In the year 2007-08, it was to the tune of 17.51 percent of the total defense budget and has gone down to 11.96 percent in the year 2016-17.

◦ …there appears to be a lack of sufficient sincerity towards capacity enhancement and modernisation of the Air Force.

The report also reveals how the IAF from 2016 onwards was made to pay over Rs 2500 crore in customs duty, an amount which was to be reimbursed to the service but never was. In fact, out of its meagre resources, the IAF is set to further shell out Rs 1726.98 crore towards custom duties in 2018-19 too! Indeed in the coming years, some of the earlier inked deals like the one for French fighter Rafale and American helicopter Chinook are expected to fructify. However, these are fruits of what has been inked in the past. Yet, by the end of the next decade, the IAF will be left with a paltry 19 squadrons says the same Parliamentary panel.

A decade is all that separates a rapidly-modernizing Chinese air force from the IAF which, as of now enjoys the upper hand in a trans-Himalayan encounter of the type Gaganshakti 2018 envisaged says Air Vice Marshal Manmohan Bahadur (Retired), a veteran helicopter pilot. “Today, we have better equipment, better support fleet and much better aircrew training. However, if we cannot generate a top class next-generation fighter in house in the coming decade, then it is anyone’s guess where India’s advantage will be,” he added.

It took the IAF nearly nine months to plan out Gaganshakti 2018. A conflict, however limited, may not provide such a cushion. The IAF is also mindful that the day they square off with China, Pakistan may jump in too.

“We have a task at hand. What we don’t have are the best tools. When will they arrive, no one can tell,” explained an officer.

Jugal Purohit is a senior special correspondent for India Today TV. This article first appeared in wordpress.com of 23