Warships from the navies of United States, Japan, Philippines and India participated in a weeklong exercise from 2 May to 8 May, in the South China Sea, sending a clear message of cooperation to protect the sovereignty of the Indo-Pacific. This was perhaps one of the most significant multilateral naval engagements in recent times in the South China Sea.

Six vessels were present for the transit through disputed international waters in the South China Sea. These included the U.S. Navy’s Arleigh Burke-class guided-missile destroyer USS William P. Lawrence. The Japanese Maritime Self-Defense Force had two ships participating. The first was the lead ship, JS Izumo, of the Izumo-class of helicopter destroyer and the second was JS Murasame, a destroyer. The Izumo has previously participated in joint exercises with the United States and India. The Philippine Navy sent BRP Andres Bonifacio, a patrol ship, to join the multilateral exercise. India had earlier sent two warships to participate in the Chinese People’s Liberation Army Navy’s recent fleet review—The INS Kolkata, a guided-missile destroyer, and INS Shakti, a Deepak-class fleet tanker. Both these ships, while returning to India, participated in the above exercise. These ships had earlier also engaged in a bilateral exercise with Vietnam.

As per press release from the US Navy’s 7th Fleet, “The ships conducted formation exercises, communication drills, passenger transfers and held a leadership exchange aboard JS Izumo… Events like this provide opportunities for like-minded navies to train together and promote maritime cooperation throughout a free and open Indo-Pacific”.

The recent South China Sea quadrilateral exercise underscores growing networking between countries partnered and allied with the United States. It marks the first engagement of its sort in the South China Sea and may presage similar operations in the future. Speaking in the Claremont’s Institute’s both Anniversary Gala in Beverly Hills, Mike Pompeo, in his address asserted that the US is banding together with the like minded nations like Australia, India, Japan and South Korea to make sure that each Indo-Pacific nation can protect its sovereignty from coercion. 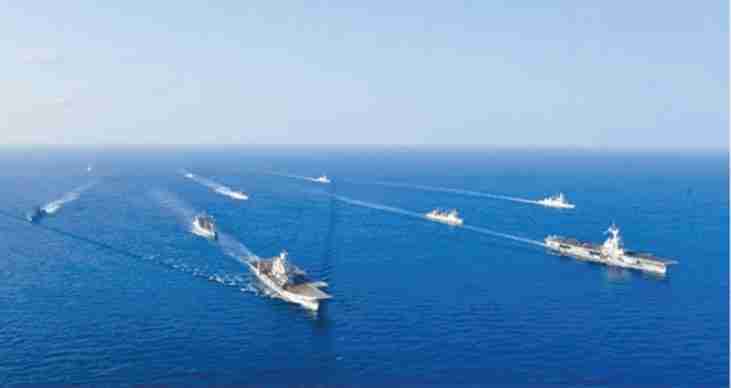 Varuna 2019, held off the coast of Goa, is the largest ever undertaken by the two navies and represents the climax of the strengthened maritime co-operation between India and France. The harbour phase of the exercise began at the Mormugao Port Trust in Goa on 01 May. A week later, ships of the two navies sailed out on 8 May for the sea phase of the exercise which concluded on 10 May.

Cyclone ‘Fani’ came with great warning from the India Meteorological Department (IMD) and when it struck the coast of Odisha with full fury on 3 May, the government of India and the state government was prepared to deal with the devastation that was to ensue. 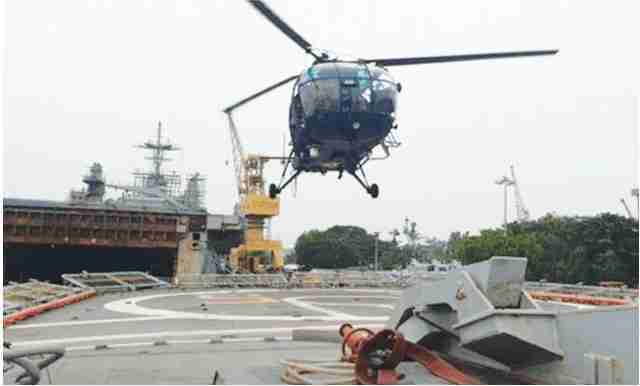 The IMD tracked the storm and issued numerous yellow warnings for much of the south-eastern portion of India when the cyclone started to intensify. The Government of Odisha evacuated over 1.2 million residents from vulnerable coastal areas and moved them to higher ground and into cyclone shelters built a few miles inland. From the Centre, the NDMA (national Disaster Management Authority) swung into action, and along with the state government, took preemptive steps for disaster mitigation.

A sterling role was also played by the Indian Navy which readied naval ships and aircraft at Arakkonam and Visakhapatnam air-bases to prepare for the storm’s aftermath and aid in reconnaissance, rescue and relief operations. Vice Admiral Karambir Singh, Flag Officer Commanding-in-Chief, Eastern Naval Command personally undertook aerial survey of the cyclone affected area on 4 May when the Navy began its relief efforts. The extent of the damage was revealed through two maritime reconnaissance sorties undertaken by the Dornier aircraft of the Navy, which revealed the extent and scale of the havoc caused. The Indian Navy thereafter undertook a three pronged rescue and rehabilitation effort centred around Puri and its suburbs in coordination with the state government and the district administration. Three Indian Navy ships, Ranvijay, Kadmatt and Airavat along with naval helicopters were pressed into service for aerial survey and immediate response through their integral helicopters. Relief and rehabilitation ‘bricks’ and ‘pallets’ (Naval parlance for containerised relief stores) comprising food material, essential medical supplies, clothing items, disinfectants, repair material, chain saws for removing damaged trees, torches and batteries, had earlier been sent to the INS Chilka, a naval establishment at Odisha, closest to Puri, and the Naval Officer-in-Charge (Odisha) coordinated the distribution of these relief materials. A community kitchen was also set up by the Navy. To coordinate the relief efforts, the Eastern Naval Command had pre-positioned Liaison teams in cyclone affected areas around Puri, and these teams thereafter directed the rescue and relief efforts being undertaken by the ships. 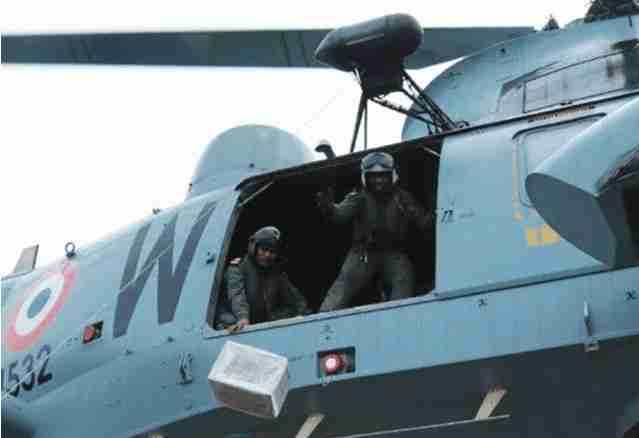 The Indian Naval Base, INS Chilka, is the premier training establishment of the Indian Navy. Admiral Karambir Singh commended all the naval personnel for their proactive preparatory activities to mitigate effects of the cyclone and for the assistance thereafter rendered, which greatly augmented the efforts of the state government and the central agencies.

A Defence Cyber Agency is finally being established to cater to threats emanating in the cyber space from inimical forces. The Agency will be headquartered in Delhi and Rear Admiral Mohit Gupta has been nominated as its first head. The DCA is one of the three agencies along with the Special Forces and Space Command that was set up last year after clearance by the CCS. It was announced by the Prime Minister during the Combined Commanders’ Conference in Jodhpur in 2018. While the Cyber Agency is shortly being launched, the Space Command will take some time as the structure for it is still being discussed. 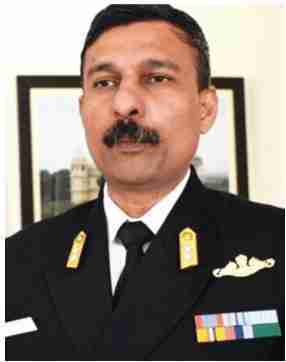 Credible cyber deterrence requires modern means and capabilities for cyber exploitation, technical intelligence, cyber deception and launching of probing operations. To enhance the capabilities of the Indian armed forces, operationalisation of a ‘Defence Cyber Agency’ is the first step to develop cyber power within the designated time frame.

ARTRAC TO SHIFT TO MEERUT The Indian Army’s Training Command is set to shift to Meerut from Shimla in the coming months. The move has been necessitated to overcome logistical requirements and is also part of the ongoing restructuring that is being carried out at multiple levels by the Army. The role of the ARTRAC will expand post the restructuring, with the Directorate General of Military Training, currently part of Army HQ, also being shifted and merged with ARTRAC.

Meerut was chosen as the new location for ARTRAC due to its connectivity with New Delhi as it is getting connected to the nation’s capital by an express highway and a rapid rail transit corridor. The assets of the Army will be taken over by PH&HP Area, which will now move to Shimla. 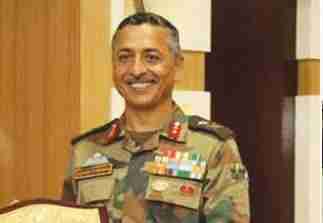 Based outside the national capital, the SFD will have two SF battalions at its core, along with teams from Marcos and Garud. A recommendation to create such a force had first been made in 2012 by the Chiefs of Staff Committee, which had recommended the creation of three joint commands in the areas of cyber, space and special operations. The new joint military doctrine, released earlier this year, also underscores the need to prepare the defence forces for the “emerging triad” of space, cyberspace and special operations for future combat. The Special Operation Division would be tasked to deal with specific operations, which may have serious security implications for the country. 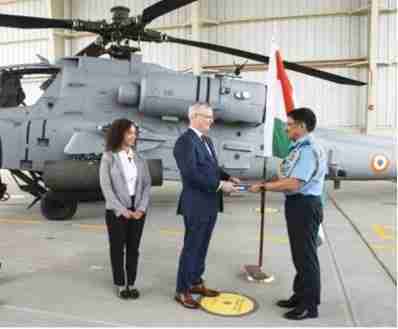 The helicopter has been customised to suit IAF’s future requirements and would have significant capability in mountainous terrain. It has the capability to carry out precision attacks at standoff ranges and operate in hostile airspace with threats from ground. The ability of these helicopters, to transmit and receive the battlefield picture, to and from the weapon systems through data networking makes it a lethal acquisition. With this acquisition, India’s Armed Forces will get a ‘significant edge’ in future joint military operations.

India had signed a multi-billion dollar deal with the US government and Boeing for 22 attack choppers in September 2015. The first batch of these helicopters will be shipped to India by July.

An Indian Army motorcycle team set off on a 1,000-km expedition of the Karakoram Range’s unforgiving terrain and extreme climate from Karu, Leh on7 April. The expedition was carried out in partnership with Royal Enfield and Himalayan Motorsports. The eleven member expedition comprised six Indian Army personnel from the Army Service Corps, four from Royal Enfield and one from Himalayan Motorsports Association (HMA) and was undertaken to commemorate the 20th Anniversary of the Kargil war.

Earlier in January 2019, an exacting selection process was organised by the HMA and form a list of 19 hopefuls, 11 men and women were selected to be part of the team. The Indian Army riders were Maj. K. Renuka, Maj. Bhupesh Rawat, Capt. Arpit Kapila, Capt. Jabez Philip, Capt. Akshay Joshi and Capt. Nikita A Nair. The Enfield team was represented by Sachin, Aditya, Hema and Nihal. Mr Vijay Parmar was the representative of the HMA. 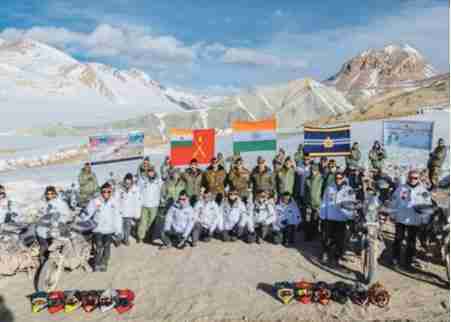 Over 14 days, the team traversed, with due acclimatisation, through some of the highest motorable passes including Chang La and Khardung La, inhabited villages and iced water bodies. The team traversed over a 1000 km of high altitude ranges, to include places such as Daulat Beg Oldi, Chongtash, the Depsang Plains and the Siachen Glacier, all the way to the Karakoram Pass at 18,716 feet, which it reached on 16 April. GOC 14 Corps, Lieutenant General YK Joshi, met the riders at the Karakoram Pass and lauded their efforts, especially the two women officers from the Army and the woman member of the Royal Enfield Team. The route, which in the past was used as the Afghan trade route, has never been explored.

STRATEGIC MILITARY ASSETS MUST BE USED OPERATIONALLY ONLY

FIRST C 17 TOUCHES DOWN IN INDIA