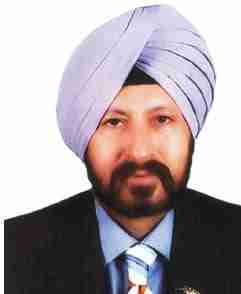 The United States government has offered to supply 22 Sea Guardian unmanned aerial vehicles (UAVs) to India. The Sea Guardian is a state-ofthe-art advanced maritime reconnaissance UAV , which is expected to be a game changer for maritime security. Earlier, in 2015, of the four ‘pathfinder’ projects that were shortlisted for joint development and co-production during the Obama-Modi Summit, one was the next generation Raven mini-UAV for battlefield surveillance. The current Raven UAV is hand-launched and has a range of 10 km.
The Indian armed forces already have in service the indigenously designed and manufactured Nishant and the Israeli Heron and Searcher I & II UAVs. General Dalbir Singh Suhag, the former COAS, had said during an interview in January 2015, “UAVs would play a vital role in future battles and there is a requirement to enhance the Indian Army holdings.”

UAVs are low-cost, low-risk, highpayoff intelligence, surveillance and reconnaissance (ISR) and target acquisition (TA) systems. UAVs can be deployed quickly to cover vast areas and, hence, enhance responsiveness. The employment of UAVs improves situational awareness, helps to increase the operational tempo and reduces the sensor-to-shooter time lag. When employed in conjunction with other sensors, UAVs assist in confirming or negating the efficacy of informationgathered and, thus, qualitatively improve the intelligence available to commanders.

While UAVs have several disadvantages such as vulnerability to enemy fire and interception and limitations of communications, they can be employed flexibly and provide unique capabilities to all the Services. While some operational needs are common, others are specific to individual Services.

Reconnaissance, Surveillance and Target Acquisition (RSTA) Requirements of the Services

A large number of the RSTA requirements that can be fulfilled by UAVs are common to all the Services, though with minor variations in the methodology of use. The major common needs of the Services are as under:

Another emerging requirement is that of unmanned combat air vehicles (UCAVs) to deliver PGMs to destroy selected targets. UCAVs have come of age and have proved their efficacy in recent wars fought in Afghanistan and West Asia. These new weapons platforms have enormous potential to be ‘cued on’ to targets that have been identified and selected for destruction or to act as stand-alone hunter-killers in a battlespace that is teeming with targets, e.g. during an enemy offensive launched with mechanised forces in the plains. The weaponry that UCAVs need to carry and the on-board sensor suite that is necessary to locate targets and guide PGMs on to them, need separate analysis and are not discussed here. It has been reported that the IAF is likely to soon induct the Harop UCAV of Israeli origin. It is a combination of a UAV and a missile and is disposable. Also, the DRDO is developing the AURA (autonomous unmanned research aircraft) UCAV for the IAF .

Sensor suites are the most important sub-system of a modern UAV and account for one-third to half its cost. The selection of sensors is extremely important, as these must provide information and data in an electronic form that is compliant with the network centricity requirements of the Services. Ideally, data standards should be the same in all the Services so that the inputs provided by the surveillance devices of one Service can be used without any problem by the other Services.However, while the Services are working on achieving compatibility, in the short-term it may be adequate to share information and data after due sifting rather than automatically.

The most common user need, particularly of the Army, is to be able to see a real-time picture of the battlefield during day light conditions. Hence, real-time streaming video is a major requirement. Since it requires a large bandwidth, video imposes severe constraints on the communications suite that a UAV can carry.Modern satellites are providing photos of one metre resolution and photos of up to 30 cm resolution can be procured commercially today, though with a small time lag. Specially designed military satellites are capable of providing a still higher resolution.

THE INDIGENOUSLY DESIGNED AND MANUFACTURED NISHANT AND THE ISRAELI HERON AND SEARCHER I & II UAVS ARE IN SERVICE WITH THE INDIAN ARMED FORCES.

Hence, it would be justifiable for the users to demand day light photos of equally good resolution from UAVs that fly at much lower altitudes. Photos of such high resolutions will enable users to clearly identify even small military targets, prioritise them for engagement and adjust artillery fire or destroy them with PGMs. The electro-optical/ thermal imaging/ infra-red (EO/TI/IR) sensors available today can meet this demand.

Some of the limitations of EO/TI/IR sensors can be overcome by Synthetic Aperture Radar (SAR) that can take all weather, day/night images with a fairly high resolution and can look through clouds, fog and foliage. Resolutions of the order of 0.3 to 0.1 metres at 25 to 20 km, respectively, are now becoming available. While radar weight is still a major consideration, SAR systems are being modernised and miniaturised at a rapid rate. A future Indian SAR system must incorporate current developments and should be so designed that the technology can be upgraded even after introduction into service. 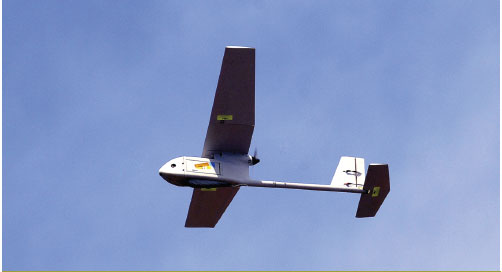 THE IAF IS LIKELY TO SOON INDUCT THE HAROP UCAV OF ISRAELI ORIGIN. IT IS A COMBINATION OF A UAV AND A MISSILE. THE DRDO IS DEVELOPING THE AURA (AUTONOMOUS UNMANNED RESEARCH AIRCRAFT) UCAV FOR THE IAF .

For naval UAVs on long endurance offshore missions, satellite links are inescapable. Command and control communications also need to be provided with ECCM capabilities so that the UAVs can be given instructions even under enemy jamming. Sigint and ELINT missions and active EW missions are rapidly becoming significant roles for UAVs as weight and power limitations are being gradually overcome. The existing indigenous EW capability needs to be enhanced further and adapted for use on UAVs.

UAVs must be able to provide an accurate location of enemy targets (tanks, gun positions, weapon emplacements, bumpers and pill boxes, ATCs, communications centres, enemy ships etc.) or points of interest (choke points, bridges, artificial obstacles, oil slicks etc.). For the purposes of targeting by artillery fire, the location should be accurate ideally to within five metres. Even with GPS, especially nonmilitary use GPS, such accuracies may not be achieved. Hence, it is necessary to strive for more accurate survey and location technologies such as inertial navigation and ring laser gyro, provided these can be accommodated within the constraints imposed by the airframe, the need to carry out high endurance missions and the need to equip UAVs with multiple sensor suites.

In the air defence environment prevailing in modern wars, the survivability of UAVs is a key requirement. The technologies necessary to enhance survivability include low radar signature, radar warning receivers, chaff dispensers, ECCM suites to ensure that communications with the UAV are not disrupted, low acoustic signature of the engine and, where possible, radar absorbing paints. These requirements will undoubtedly burden designers with the need to strike a fine balance between the size, shape and weight of the airframe and the payload that can be carried.

The Ground Control Station (GCS)is the hub of all UAV operations. It is imperative that the GCS should be developed to common standards for all the Services so that inter-operability is ensured. These should also be capable of interfacing with the command and control and decision support systems of their respective Service and the relevant sub-systems like the Battlefield Surveillance System (BSS) of the Army. Service-specific utility and interoperability through commonality of data standards are no doubt conflicting requirements, but these need to be met if all the surveillance assets are to be optimally utilised.

It will not be enough to merely locate static and moving targets by employing UAVs on long duration missions and generating a vast data bank. As these provide a real-time capability, the required tri-Service infrastructure must be created to analyse the incoming inputs within minutes, sift ‘actionable’ bits from those that help to build a continuous intelligence picture and disseminate the actionable information to the users.

The roles and missions of UAVs have been expanding in a dynamic manner since their advent in 1982, when the Israeli army first used them for surveillance and as decoys over the Bekaa Valley in Lebanon. Since then, UAVs have been extensively employed for RSTA and are now acknowledged as effective force multipliers. Emerging technologies will further enhance the effectiveness of UAVs. A very high level of tri-Service networking is required for the optimum exploitation of the capabilities of the UAVs. The next logical step will be to introduce UCAVs into service in the armed forces as a low-cost option for air-to-ground strikes.

THE “INDIAN” AIR FORCE ON THE FAR HORIZON