THE MEDIA DISCOURSE ON J&K

Information flow drives dialogue, discussions and debates in a society, which is much needed for a nation’s well-being. Fourth estate, or the media, comprising an army of journalists aid and abet this flow of information that kick-starts societal discussions about legislative policies, executive actions and societal aspirations. Journalists rely on five ‘Ws’ and one ‘H’ to weave a story and to break down complex jargons, thereby simplifying the world for their audience. The five ‘Ws’ refer to What, Where, Who, When and Why and ‘H’ that refers to How, are exhaustive enough to systematically report an incident. Different journalists and columnists may choose to accentuate either of these basic questions in their reportage and spin the story accordingly. In this reportage ‘facts’ remain sacrosanct.

So an individual journalist or a media house may choose to highlight one of the specific aspects in their news but they cannot tamper with the facts. These ‘Facts’ are sacred. In the case of Jammu Kashmir all these basic tenets of journalism has gone for a toss, such that years of fact-distortion and selective reporting has resulted in a prejudiced flow of information.

The problem is compounded further as people based in Jammu & Kashmir, specifically in Kashmir Valley, rely almost entirely on newsfeeds and news reports by newspapers, magazines and web channels that are based in and operated from the Kashmir Valley. Most of Valley-based media groups have dubious sources of funding and harp on Kashmiri victimhood. They twist, turn and manufacture facts to justify Kashmir’s secession from India. All incidents are moulded in a way to prove that the Indian State is an occupying force that is committing barbaric atrocities on Kashmiris through its armed forces. 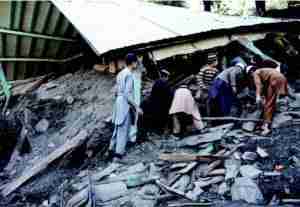 In the year 2009, two young women Neelofer and her sister-in-law Asiya drowned in a stream in Shopian and subsequently died. There were allegations of rape and murder, and several enquiries were conducted. This mishap with two young women of the Valley still touches a raw nerve in Kashmir. The media reported on this unfortunate incident and the investigations that were being carried on. Yet, the Kashmiri media houses implicated the Indian Army in this episode, when the Indian Army was nowhere involved. One of the young stone pelters, whom I met recently, confided in me and said: “We will not sit back till we avenge the rape and murder of our sisters Neelofer and Asiya.” The conviction in his tone that it was the soldiers of the Indian Army who committed this ghastly rape and murder was striking. He was unwilling to hear any argument or look into the facts that the Indian Army had absolutely nothing to do with this case. He showed me news reports as ‘evidence’. And these news reports were screen shots from Kashmir Valley based newspapers, magazines and portals. “Only our media reports these incidents. And they report truth,” he said browsing through the articles on his smartphone.

This effect of the concoction of facts by Valley-based journalists does not stop here. International media houses oftentimes pick up such news stories and quote these Kashmir Valley-based newspapers and magazines in their news reports. When an international news organisation writes about any issue it is followed by journalists all across the world, which includes India. Oftentimes, columnists and authors quote these publications in their writings and an incident becomes etched in the memories of a common Kashmiri and his psyche, forever.

A section of Delhi-based media organisations are also a party to this game. This coterie of journalists choose to selectively highlight issues based in a localised pocket of Jammu & Kashmir as the ‘only voice’ of Kashmir. There is absolutely no coverage of gross human rights violation in the Pakistan-occupied Jammu Kashmir (PoJK). For instance, Baba Jan a human rights activist in the Gilgit-Baltistan area of PoJK has been under illegal detention by Pakistan since 2011. His fault was that he ‘dared’ to protest against the massive and illegal construction activities under the CPEC (China-Pakistan Economic Corridor), which resulted in a man-made landslide. The CPEC is a USD 46 billion project that runs through Gilgit-Baltistan, wherein massive construction activities, excavations and detonation of mountains continues unabated. Baba Jan, the local leader, and the villagers felt concerned when in January 2010, a massive landslide hit Hunza Valley in Gilgit-Baltistan killing around twenty people and blocking a portion of River Hunza. Due to this landslide, a huge artificial lake was created that submerged several villages in Attabad.

This landslide was the result of massive on-going construction activities under the CPEC, thus making the landslide as ‘man-made’ rather than a natural occurrence. Baba Jan and other villagers expressed their concern to the Pakistan government that this newlyformed man-made lake in Hunza Valley might further overflow and submerge other villages. The concerns were expressed to the Pakistan government, since Pakistan continues to illegally occupy this part of Jammu Kashmir and is the de-facto colonial master of Gilgit-Baltistan. These worries went unheeded and six months later in June 2010, the overflowing water submerged two more villages in Attabad.

Protests and demonstrations under Baba Jan’s leadership continued and in order to quell the unrest, Pakistan arrested Baba Jan in 2011. He has been under arrest ever since. This illegal detention of a human rights activist in PoJK was neither reported by newspapers based in Kashmir Valley nor by the Delhi-based mainstream media.

And this news black-out is more by design, rather than by chance. News not pouring in from PoJK ensures that people in Kashmir Valley remain unaware of the pathetic conditions in which their Kashmiri brethren live across the LoC, so they can continue to be fed with a daily dose of Azadi.

BABA JAN, THE LOCAL LEADER, AND THE VILLAGERS FELT CONCERNED WHEN IN JANUARY 2010, A MASSIVE LANDSLIDE HIT HUNZA VALLEY IN GILGIT-BALTISTAN KILLING AROUND TWENTY PEOPLE AND BLOCKING A PORTION OF RIVER HUNZA. DUE TO THIS LANDSLIDE, A HUGE ARTIFICIAL LAKE WAS CREATED THAT SUBMERGED SEVERAL VILLAGES IN ATTABAD.

There have been countless instances when a Kashmiri has been forced to accede to the demands of these Romantic Terrorists due to threats to his family. During my recent visits to the Valley a few Kashmiris confided in hushed tones about these concerns and how the family had to take their girl for secretive abortions. These girls and their families who are forced into submission by these drug-addict womaniser terrorists take their revenge by silently ganging up and informing the precise hide-outs of their assaulter. The security forces then conduct the cordon and search operation (CASO) and then eliminate these Terrorists. It is due to this reason that there has been a spike in elimination of terrorists in the Kashmir Valley. If reported correctly, this aspect of Kashmir will weaken the demands of Azadi and turn public anger against these armed terrorists. The Valley-based journalists choose to blatantly ignore this part of terrorism.

In fact, even during the nineties when terrorism first came to Kashmir, it was the Kashmiri women who were first systematically assaulted. It was an era when Pakistan-sponsored foreign mercenaries from across the world were infiltrated inside Kashmir. These foreign mercenaries who had come inside to fight for “Kashmir’s freedom” were at the forefront of exploiting Kashmiri women. During those years, these mercenaries and terrorists simply barged inside the homes and demanded food and women from the hapless Kashmiri. Those that resisted were shot dead and others relented grudgingly. Women who were raped at gun-point had to then go for abortions. This naked assault of Kashmiri women led to massive heartburn among the local Kashmiri and they became informers of Indian Army and other security forces. It was this silent rebellion which broke the backbone of Pakistan-sponsored terrorism at that time. The Valley’s famed journalists have chosen to ignore this saga as well. 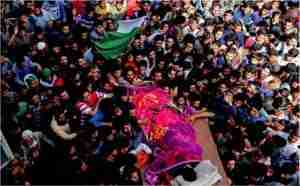 Most times, the photographs of slain terrorists in Kashmir are smartly edited to give an impression that the dead militant enjoys massive popular support. None of the media houses based in Kashmir report that barring a few hundred, almost the entire crowd has been pulled out from their homes to take part in the funeral processions. Even the high profile journalists who especially fly over to Kashmir Valley never bother to report from the fringes and fail to get the whiff of prevailing sentiment.

Unfortunately a scenario about Jammu & Kashmir has been created such that news that cannot justify demands for Azadi, is no news at all. Facts are made up, genuine issues are covered up and in the process if ethos of journalism gets eroded, then so be it. Pressing issues that concern the well-being of Kashmiris gets buried in this maddening din of Azadi.

Thankfully, technology has been a great enabler in modern times that has opened new avenues across sectors, including news media. News dissemination is now no longer the preserve of a select few and rising internet penetration has opened new possibilities for the exchange of ideas. In this new wave where internet access is rising at a rapid pace, the need of the hour is to report on hitherto untouched issues of Kashmir and also to correct the prevailing distortions in the discourse on Kashmir. While the newsprint may or may not reach the common man in the state, real stories raising genuine concerns will definitely reach through myriad web portals.

MOST TIMES, THE PHOTOGRAPHS OF SLAIN TERRORISTS IN KASHMIR ARE SMARTLY EDITED TO GIVE AN IMPRESSION THAT THE DEAD MILITANT ENJOYS MASSIVE POPULAR SUPPORT. NONE OF THE MEDIA HOUSES BASED IN KASHMIR REPORT THAT BARRING A FEW HUNDRED, ALMOST THE ENTIRE CROWD HAS BEEN PULLED OUT FROM THEIR HOMES TO TAKE PART IN THE FUNERAL PROCESSIONS.

Experts with vast experience in their respective fields of knowledge about Jammu Kashmir who were previously spurned by big media brands have begun sharing their views and their stories. New voices improve the texture, tenor and quality of discussions. This, indeed, is a refreshing change but much depends on whether the momentum continues. Current indicators point that this momentum will build upon in the coming years. It should. Because healthy discussions lead to a better society.

(Vivek Sinha is a Journalist, Film Maker and Author. He has made short films, documentaries and is the Author of a Novel “Chip in the Madrasa”. He tweets at @VivekSinha28)