Last Christmas, I promised my daughter Avina that we would visit her in New Zealand instead of her coming to India on her Christmas break. And while I was singing old Bryan Adam songs to myself she beat me to the draw and bought our air tickets as a Christmas gift, booking us by Korean Air on both legs of the flights. The Korean Air staff was very courteous and the food a novelty. We were served the Korean national dish Bibimbap, which is essentially a plate of sticky rice with chicken stew and hot sauces. It tastes a bit like chicken Rogan Josh dipped in daal tadka and served in a dish of boiled rice with a hint of fish sauce in it. No, I’m joking. It is dash good and you must try it. The 11 hour flight from Incheon airport was pretty smooth except for a short time when I thought all of us were high on cannabis, when the flight seemed to be rocking and rolling in Sea State Five on the Beaufort scale.

We had heard so much about the immigration formalities into New Zealand that we were beginning to get cold feet when we arrived at the desk. Practically every friend who had visited NZ previously had launched into a polemic on how the Kiwis charged $400 NZD if the traveler was caught with fruit, honey, nuts and dirty shoes. Somebody told us that if we didn’t declare our pickles, masalas and chutneys, special forces would whisk us away to the NZ version of a Siberian Gulag on the southernmost tip of the South Island!

My imagination ran riot as we approached the immigration desk. I began imagining myself navigating in a Hunter-Killer submarine, moving around in the uncharted depths of the Mariana Trench looking for Obi Wan Kenobi. Surprisingly, the mono-browed lovechild of Gru (Despicable Me) and Ogre (Shrek) at the desk acquitted himself well by letting us go after we declared our sealed packets of ‘Chewda’ and Indian sweetmeats. But just when he waived us on, I couldn’t resist asking him whether we could bring Indian pickle on our next visit to NZ. There was an awkward pause from him as he began building up a mountain of torque to catapult me into the nearest foliage. Luckily, Sandra pulled me away. By the time we careered past the exit door, I silently began to make the sounds of a howling monkey with a feeling of pure joy as I imagined myself running around the car park absolutely naked. In the car park I had the same sort of glow on my face that I reserve when I see a really good Terminator movie. Avina had arranged to pick us up and take us straight to her homestay, where we freshened up and later in the evening shifted to Sandra’s brother Saville’s, luxurious home on the hilltop in Henderson. 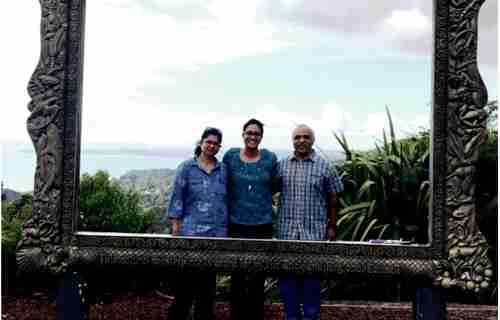 On New Year’s eve we attended the midnight Mass at St Patrick’s Cathedral to thank God for a good year and then witnessed the fireworks at the Sky tower next door. The next day Avina drove us to Crystal Mountain, which has a collection of unique crystals from all over the world, including a private crystal museum and an animal park. The Kiwis are however, about as communicative as the Red Indian chappie in ‘One Flew over the Cuckoo’s nest’. In fact, I’ve had more inspiring conversations with my potted plants. But Sandra accidentally discovered a lady who had studied in her school in Byculla and began a conversation with lots of jiggles and giggles in it. Imagine two convent school girls on helium and you’re there. Before long her new best friend gave us a healthy discount of 15 NZD on our tickets which we used to buy huge dollops of ice cream on our way out from the Museum. Sandra and Avina bought a few trinkets. We then set out to drive past the vineyards of Henderson. Driving around in New Zealand

I was always under the impression that driving in India was most difficult and dangerous. But in NZ one has to drive at 50 KMPH on the city roads and 80 KMPH on the highways and mountain slopes. Anything less than that invites road rage, apart from the middle finger. The locals here don’t take any prisoners – they pull you out of the car and beat you to within an inch of your life. Yet at the same time if you’re driving at full speed on a mountain side and your reactions are a little slow, your car could punish you by hurling itself upside down on the slopes and setting itself on fire. Sadly, you can’t drive around the countryside with a glass of Chablis swilling around your arterial route map, which incidentally you can do in India. At one of the roundabouts there was a car on my right which had slipped under my radar, so instead of giving way I shot ahead. I got a loud honk, a few swear words and the middle finger from the driver, not to mention a gentle shouting from my daughter. Driving to the Arataki ranges at 80 kmph with cars tailgating me was not my cup of tea either. It was a terrifying experience. Come to think of it, I was so focussed on the road that even if Princess Diana had stood naked on the roadside thumbing for a lift I wouldn’t have noticed. I was bucking and writhing, shaking and rattling while I took the blind corners at such high speeds.

The Arataki Mountain Ranges are just a half an hour’s drive from Henderson, but driving at 50 kmph on the hairpin bends and turns on the mountain slopes keeps you on the edge of your seat. Anything slower than this and you’re liable to get a fine or a middle finger. The view from the top is breathtaking. They have little sit-outs there and enclosures for children to play with crayons and watch wildlife educational videos.

The Tyburn monastery is located in a peaceful suburb of south of Auckland. It has a small chapel run by the cloister nuns who reside there. There is even a small trail that runs down a ravine which has a steam flowing through it. We attended Mass in the chapel and then followed the trail downhill all the way to the stream, where we discovered the Way of the Cross stations. The whole experience was invigorating. So much so, that after our visit to the monastery I was filled with the urge to take up beekeeping as a hobby.

It is said that you can experience all four seasons of the year in one day in Kiwiland. So on the first few days we waded into battle sporting every gizmo known to man from rain boots to Balaclava and sunglasses, the lot. Their summers are like our winters. But guess what, the Kiwis don’t carry raincoats. They just wait for the rains to stop and then they go on their way. It’s pretty breezy most of the day. The sun burns the skin in a different way than it does in the tropics. And they have the highest rate of skin cancer in the world. So we avoided going out in the hot afternoon sun on most days. But on some days the wind was so strong that the misty fog would be replaced with heavy rain and the wind would be moving people’s buildings around. Don’t tell me I didn’t warn you!

Brown’s Bay is another fascinating location among the many small nooks and corners of the North Island. It’s a pleasure walking on the sandy shoreline with the sea lapping at your feet. The summer weather is just perfect for this. And you can round off your trip by having a bite at the local Chinese joint.

Having seen the Zoos in Washington, Calgary, South East Asia, San Francisco, Singapore, and many European ones, I would rate the Auckland Zoo as one of the best in the world. They have animals in open enclosures, which are separated continent wise. You can spend a whole day in the Zoo and come out feeling good that you were born a human being.

Auckland harbour is a sailor’s delight. It has the world’s largest capita of sailing boats and a treat for the eyes. Shopping in NZ is however, most boring. You can’t bargain here. The cost of everything is three times that in India and the variety is limited. Also the electrical plugs are different so buying anything electronic is just a waste of good money. Sadly some of the locals here live on loans and go about buying things like there’s no tomorrow. Some of them sport tattoos on their faces but despite their spending power they seem to be too wooly-headed to even balance the cash collection at an RSI tambola game.

Captain Anil Gonsalves, IN, (Retd) joined NDA in 1975 and passed out in 1978. He commanded Coast Guard ship Rajshree and INS Mahish in the Navy among his varied appointments. He took premature retirement in 2005 and presently is working in the Offshore Division of the Shipping Corporation of India as Master in their Platform Support Vessels

ON THE CUSP OF CHANGE