The Raksha Mantri, Smt Nirmala Sitharaman has constituted a 13-member Raksha Mantri’s Advisory Committee on Ministry of Defence (MoD) Capital Projects (RMCOMP).Mr Vinay Sheel Oberoi, Former Secretary, Government of India, has been appointed the Chairman. The members of the committee are:

The three serving officer members of the Committee are, ACIDS (PP&FS), HQ IDS; Rep of DDP(JS Rank or Above) and Brig/Col Equivalent from HQ IDS, who will be the Member Secretary.

● Undertake independent review and status check of identified ongoing critical capital projects aboveRs. 500 crore including ‘Mission Mode’ projects, ‘Make’ projects, ‘Buy (Indian), ‘Buy (Indian – IDDM), ‘Buy and Make’ and ‘Buy and Make (Indian)’ projects as well as ‘Design and Development’ projects under the Ministry
● Assess the physical and financial progress of these schemes/projects.
● Identify specific bottlenecks and concerns that are responsible for delays, wherever applicable and suggest the way forward.

● Any other issues related to project monitoring and appraisal that may be referred by MoD.

The committee will have a tenure until the end of August 2018 (unless otherwise ordered). Deliverables for the committee are as follows:

● Any other issues related to project monitoring and appraisal that may be referred by MoD.

● Present an initial status report on the identified projects to Raksha Mantri by 31 March 2018. The report shall include apart from the current status of the projects, issues, remedial measures and follow-up strategy.

● Based on the decisions on the status report, submit two follow-up corrective Action Taken Reports by 30 April 2018 and 31July 2018, respectively.

● Suggest modern management concepts that can be leveraged to reduce delays.

● The Chairman RMCOMP may also co-opt up to two specialists/consultants as members, if considered necessary for value addition.

● The committee will also invite/visit heads of DPSUs/DRDO/OFB and senior officers of MoD/DDP/Armed Forces for interactions.

CommentsThis is an important step taken by the RM which will have far reaching consequence on India’s national security and on the ‘Make in India’ thrust being given by the government, including in defence production. As monitoring will now be done by the RM, who is also a member of the CCS, it would be difficult for the Secretary Defence Production, to trot out excuses for delay of projects. The term of the Committee is up to 31 August 2018. While the committee should be able to complete its task in the allotted time, it is hoped that a similar committee is constituted every year to render similar deliverables.Some additional factors which could be looked into by the Committee are:While capital war assets are being contracted for, there is no parallel activity taking place for the creation of the support infrastructure for capital assets. Acquisition needs to be a complete exercise, which should include parallel creation of repair and stocking yards andwarehouses. This must also include land acquisition, which in many cases leads to huge delays. Alongside the above, The management of logistics and delivery of equipment to the front lines must be catered for. This includes preparation for out of area contingencies.

ARMY TO GET 40 ATAGS

After successful trial in Sikkim, the Army will soon be getting the first lot of 40 Advance Towed Artillery Gun System (ATAGS) made by the Defence Research and Development Organisation (DRDO) in collaboration with two Indian manufacturers. This is indeed a major boost to self-reliance for military equipment. Any additions or improvements to the gun can be incorporated in later versions. This will include auto -loading of ammunition and certain other specifics like reduction of the weight of this 155 mm, 52-calibre gun.

The ATAGS project was sanctioned in September 2012 and the DRDO partnered with Bharat Forge and Tata Power (Strategic Engineering Division) SED to develop two prototypes of the towed artillery guns, one of which was on display in the 2018 Republic Day Parade. After 410 Bofors Gun was purchased by India in the mid eighties, India has not ordered any new 155 mm artillery guns. However, in the past 24 months, the ATAGS is the third artillery gun that is set to be purchased or made. The cost of the 40 guns is estimated to be Rs 900 crore. 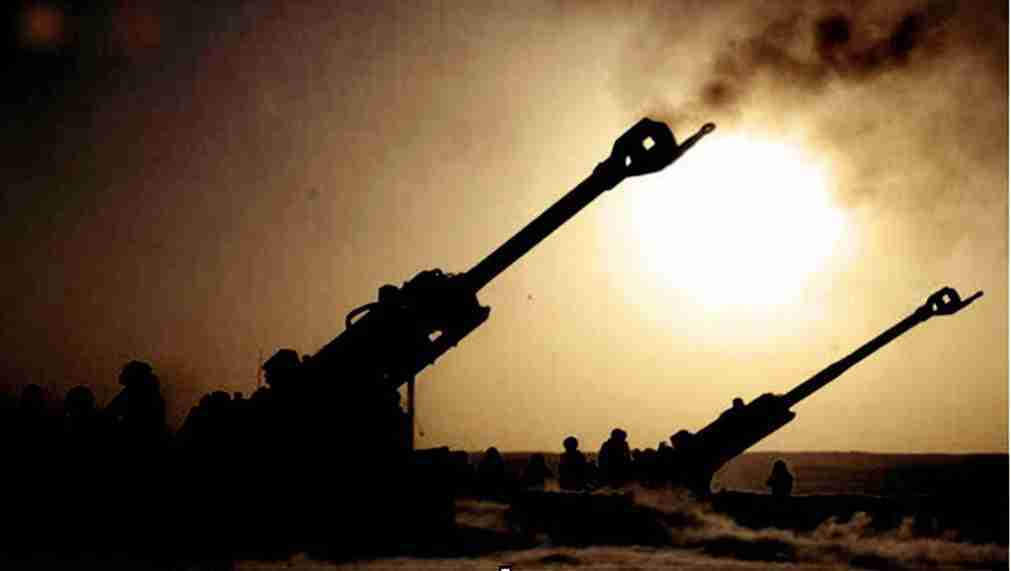 The defence outlay at Rs 2,95,511 crore has seen an increase of 7.81 percent from the previous years budget which stood at Rs 2,74,114 crore. The allocations are hence just about adequate to meet the current needs of the Armed Forces but would do little for any meaningful forward movement in the modernisation programme of the Forces. In terms of GDP outlay, the budget presented by the finance Minister shows a decline from earlier years, and works out to just 1.58 percent of the projected GDP for 2018-19, the lowest such figure since the 1962 war with China. It has long been the contention of defence analysts that the modernisation process would require a sustained investment for over a decade at 2.5 percent of GDP, to effectively deal with the collusive threat India faces from China and Pakistan.

But perhaps, the budget cannot be seen entirely through the security prism. There is a need to strike a balance between India’s need for economic growth and the wellbeing of its citizens. Investments to improve people’s health, education and skill development are vital for long-term growth prospects of a country, and the budget has rightly focused on them. It addresses the aspirations of a modernising nation through multiple initiatives, which would have a dramatic impact in the growth of India’s GDP. Thus, even the present allocation of the defence budget in GDP terms would result in higher outlays for defence, as India’s GDP rises to double its present level.

More importantly, the government has announced measures to push its ‘Make in India’ programme, including plans for two Defence Industrial Corridors and a new industry -friendly Defence Production Policy in 2018. This is likely to give a fillip to the creation of a defence industrial base, which will contribute positively to the modernisation programme and help fill the strategic void in some of the armaments which India has to currently import. Of the two defence industrial corridors, the first of these is likely to come up in the Tamil Nadu-Karnataka area.

On the flip side, India’s defence budgets over the years have shown a discernible trend of declining modernisation outlays for new projects, with almost 80 percent of the outlays earmarked for “committed liabilities”. This refers to payments for arms, which had been contracted in earlier years. The ratio of Capital expenditure to Revenue expenditure also appears to be skewed. Ideally, it should be in the ration of 50:50, but as of now, the defence budget on the Capital head is Rs 99,563.86 crore, which is barely 33.7 percent of the defence budget, with the expenditure under the revenue head at Rs 1,95,947.55 crore taking up the remaining 67.3 percent. The major chunk of revenue expenditure is manpower costs, and for the Indian Army, which is manpower intensive, the capital to revenue expenditure ratio is as low as 17:83. This makes it well nigh impossible for the Army to discard obsolescent vintage weapons and equipment in service, which in turn degrades its operational capability. This is a matter of concern, especially as China is modernising its military at a brisk pace.

On the plus side, the governments initiative to improve infrastructure on India’s Eastern borders with China is a welcome step. The Finance Minister stated that the Rohtang tunnel has been completed to provide all weather connectivity to the Ladakh region and that the contract for construction of Zozila Pass tunnel of more than 14 kilometres is progressing well. He further stated that the government is now proposing to take up construction of tunnel under the Sela Passin Arunachal Pradesh.

As per the 13th Defence Plan, Rs 12,88,654 crore has been projected for the capital outlay and Rs 13,95,271 crore for revenue expenditure. There is also a separate section in the plan on “capability development” of the strategically located tri-Service Andaman and Nicobar Command, which was set up in October 2001 but which has suffered from relative neglect, lack of infrastructure and turf wars. This was a much needed step and is a welcome addition to improving Force capability to exercise control in the Indian Ocean Region. In the final analysis however, India’s defence preparedness will come about not so much from its defence allocations as from its ability to manufacture the major portion of its defence needs indigenously. This remains an imperative requirement for India, for which the DRDO, the private sector as well as the defence public sector has a huge role to play. Will India rise to the challenge? Only time will tell.

Speaking at the investors summit in Lucknow, the Prime Minister, Shri Narendra Modi announced on 21 February that a defence industrial corridor in the Bundelkhand region is being set up to bring development in one of the most backward regions of Uttar Pradesh. This one of the two defence industrial corridors mentioned in the budget. It will bring an investment of Rs 20,000 crore and generate employment avenues for 2.5 lakh people. Speaking at the same summit on 22 February, the Defence Minister Nirmala Sitharaman said that a Defence Investors’ Cell will be made under her guidance to ensure speedy development of the corridor.“We will soon constitute a task force and send teams to Aligarh, Agra, Jhansi, Kanpur and Lucknow to discuss how will the defence be working in the next 50 years. A portal will be available to answer all the queries round the clock,” she said during the concluding day of UP Investors’ Summit. Flying Officer Avani Chaturvedi scripted history by becoming the first woman in the history of the IAF to fly a fighter aircraft solo, when she flew a MiG-21 Bison on 19 February from Air Force Station Jamnagar in Gujarat. Avani was commissioned on 18 June 2016 at a Passing out Parade where the then Defence Minister Manohar Parrikar reviewed the parade. She was commissioned along with her two colleagues, Mohana Singh of Rajasthan and Bhawana Kanth of Bihar. This was also an epoch event, as for the first time it marked the entry of women in combat. India’s indigenously developed intermediate range ballistic missile Agni II was successfully test fired on 20 February from the Abdul Kalam Island off the Odisha coast.The trial of the surface-to -surface missile was conducted from Launch Complex-4 of Integrated Test Range (ITR) in Balasore district. The Agni II missile has already been inducted into the Indian Army. As per a statement released by the MoD, the trial was conducted by the Strategic Forces Command (SFC) of the Indian Army as part of its user training exercise. The two-stage missile is propelled by solid rocket propellant system. It has an advanced high accuracy navigation system, and is guided by a state- of-the-art command and control system. The missile has a strike range of over 2,000 km. It is 20 metres long, weighs 17 tonnes and can carry a payload of 1,000 kg.