VIOLENCE IN KASHMIR VALLEY: WHERE ARE WE GOING WRONG?

Violence in the Valley sponsored from across the borders has continued without respite despite actions by the Governments and the security forces. Unfortunately, most of these actions have been reactive, tactical and predictable. We have been naïve and soft in our approach in dealing with the problem in J&K. Stone throwing is aimed at interfering with ongoing anti–terror operations and social media messages are meant to subvert the people’s mind. These are not forms of protests but acts of war against the state.

Pakistan has adopted a three-pronged strategy to keep the unrest in the valley alive and is hoping to attract the attention of the international community in the bargain. There was a deliberate attempt by Pakistan and its proxies in J&K — the separatist groups — to disrupt the Lok Sabha bypolls for the Srinagar and Anantnag constituencies, which were scheduled for the second week of April 2017. As a result, the Srinagar bypoll witnessed an abysmally low level of voter turnout and the Anantnag bypoll had to be cancelled. The aim was obviously to discredit the state apparatus and to indicate to the world at large that the Kashmiri people were unhappy with India.

Pakistan’s plan for the Valley covers actions inside the Valley and moving resources from across the border, besides a well-orchestrated propaganda strategy targeting the local population with an attempt to mislead the world. Within the Valley, crowds, including women and children, are being mobilised under coercion to project the assembly of people as a sign of spontaneous protest and resistance to Indian rule. Here, the coercion aspect needs to be understood. The security forces leave the scene after carrying out operations. The people on the other hand have no option but to live in the same place under the watchful eyes of the gun wielding terrorists and the over ground workers (OGWs), leaving them with little choice but to submit to their dictates.

Injuries to people are advertised as brutality and human right violations by the security forces. The J&K police operating in the Valley are being projected as anti-Islam and anti-people and the local populace is being provoked to target them. The aim is to demoralise the local police who have been doing a tremendous job despite their vulnerability and threats to their families. Social media messages are being sent to spread rumour, exhort people to come out of their houses to distract the security forces, disrupt anti–terror operations and assist holed up militants to escape. The larger aim is to subvert the minds of the people. Stone pelters are being paid to keep their interest going. From across the border infiltration bids have escalated three fold in 2016 as compared to 2015. The aim is to flood the Valley with trained and motivated militants to enable their ISI masters to control and direct operations from across the border and ensure that the pitch of violence doesn’t taper down. Weapons, ammunition and explosives are transported across the borders using the infiltrators as carriers. Press briefings by the spokesperson of Pakistan’s foreign office provides a clear spectacle of Pakistan’s efforts in misleading the international community into believing that while the trouble in the Valley is indigenous, India is fermenting strife inside Pakistan. Anti–terror operations are being projected as acts of human rights violation.

Before discussing India’s approach, a brief glance at how China and Pakistan deal with such problems. China has been carrying out anti-terrorism operations in Xinjiang since at least 2013 and have placed severe restrictions on the people practicing their religion. Political expression has been curbed in all its forms. Pakistan has carried out Zarb- e-Azb in North Waziristan and is presently engaged in carrying out Raad ul Fasaad across the country. During these operations, fighter aircraft, attack helicopters and heavy artillery have been freely used. Till date, the names of terrorists and civilians killed and wounded in these operations have not been notified, neither have the dead bodies been handed over to their relatives for burial. No one even knows if the dead have been given a decent burial in accordance with their religious beliefs. Similar anti-terror operations have been carried out by Western countries as well. Here too, suspected terrorists have been arrested or where necessary shot dead. Thee have been no protests or stone pelting incidents in these countries as the security forces have been firm in handling the situation. No questions have been raised also on the issue of human rights violations. 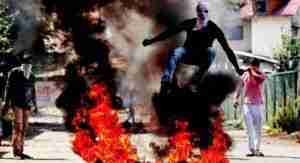 Now let us examine the situation as existing in India, where violence level have escalated to a level that is beyond the capacity of the police forces to handle. The Indian Army has been employed to deal with the terrorists in the Valley. As is the Army’s operating philosophy, only small arms have been used in its operations, yet we have allowed every one to question everything that the Army does in the execution of its task, like the elimination of a local terrorist, Burhan Wani, in an encounter or even questions on the ‘surgical strike’ carried out by the Army across the LOC, where its integrity was questioned. The deployment of Army and the imposition of Armed Forces Special Power Act (AFSPA) in these areas is repeatedly contested by the peace brigade who have been silenced for the moment, but who will once again spew venom on the Forces, as soon as the situation is stabilised.

The Government has a responsibility to maintain law and order especially in a troubled state like J & K bordering a hostile neighbour. Winning the hearts and minds cannot be at the cost of violence or soldier’s lives. The Army Chief has very clearly articulated the need to treat the stone pelters, OGWs and those interrupting the operations as anti-national elements and the need to treat them as such. The sanctity of ‘Red Lines’ once defined will have to be maintained. Empty threats are counterproductive. As for the propaganda through social media, while messages and social network accounts operating from Pakistan needs to be blocked, those generating and circulating these messages within the Valley need to be identified and punished. Blocking social media or internet in the Valley cannot be sustained for long periods and may have negative implications.

It is time India shifted the battle to Pakistan’s soil. Pakistan needs to be targeted where it hurts the country most. The fault lines in Pakistan’s cupboard are many and the most sensitive one being the status of ‘Durand Line’ bordering Afghanistan.The plot behind Pakistan’s plan to merge Federally Administered Tribal Areas (FATA), a neglected area where over 95 percent population are Pashtuns, with Pakistan’s province Khyber Pakhtunkhwa (KP) needs to be viewed in context. A large number of this tribe also live in the neighbouring Khyber Pakhtunkhwa and Northern Baluchistan.

The British demarcation of the Durand Line was a deliberate strategy designed to divide the Pashtun territory along the border region of Afghanistan and Pakistan. Today 1.3 million Afghans continue to remain as refugees in Pakistan of whom majority are Pashtuns. The world is aware of the profiling of Pashtuns being carried out by Pakistan. These refugees are expected to leave Pakistan and settle in Afghanistan but without these tribes being allowed the right to their own land. The Durand Line and Pashtunistan issues have been raised by different Afghan regimes in the past. None of the Afghan Governments including the Taliban Government which had briefly ruled Afghanistan from 1996 to 2001 have ever accepted the Durand line as the boundary between Pakistan and Afghanistan. India needs to recognise the aspirations and sufferings of the Pashtuns and support their demand.

It is time India enacted the Rajya Sabha member Rajeev Chandrasekhar’s ‘State Sponsor of Terror Bill’ and broke all economic and trade relations with Pakistan. India granted Most Favoured Nation’s (MNF) status to Pakistan in 1996, barely a year after the World Trade Organisation (WTO) came into being. Despite two decades having gone by, Pakistan is yet to reciprocate the gesture. What are we waiting for and what are our compulsions for not rescinding the agreement? Rail, road, sea and air traffic between India and Pakistan also needs to be cut down to bare minimum. The diplomatic establishments at both ends needs to be downsized and the relationship with Pakistan downgraded to a minimum inescapable level.

The treaty was signed by India as a good will gesture to Pakistan in the hope Pakistan will reciprocate the token at some point in time despite India receiving just about 20 percent of water from the system. It is an unequal treaty by all counts. Pakistan, on the contrary, has been raising motivated objections to the Kishanganga and Ratle hydropower projects being built in India. Pakistan has not respected the Shimla agreement or the Cease Fire Agreement signed in 2003. Sticking by the Indus Water treaty any longer stands to no logic. The water sharing arrangement needs to be renegotiated so as to ensure that India derives its fair share of water.

India has been blind to the activities of the self-proclaimed separatist leaders who have been hostile to India’s interests. Money laundering cases against Hurriyat leaders Syed Ali Shah Gilani, Yasin Malik, Shabir Shah and the others involved needs to be probed on priority and the cases brought to their logical conclusion. Their wealth and properties acquired beyond their known sources of income needs to be probed. A special investigation team and fast track courts need to be constituted to speed up the proceedings. The venue of investigations and trials will have to be shifted out of the Valley to provide an atmosphere conducive for the investigation and trials.

Syed Ali Shah Gilani controls the Hizbul Mujahideen (HM) and Lashkar-e-Taiba (LeT) elements besides the Jamaat-e-Islami cadres in the Valley. These cadres act as over ground workers and form a part of the logistic infrastructure which caters to support terrorist outfits including those who infiltrate into India from Pakistan. Similar set ups are working for the other Hurriyat leaders. These elements need to be identified and prosecuted for they work against the country’s interests. For this purpose too, fast track courts and a speedy trial is the need of the hour. The separatists are not elected representatives of the people and hence there can be no talks with them, which provide legitimacy and status. The security and other privileges provided to these individuals and those similarly placed need to be withdrawn without any further delay.

There are paid elements in the Valley who repeatedly deny Pakistan’s hand in the present situation in the Valley and assert that the disturbances are spontaneous and are reflective of the people’s disillusionment with India. The question is where did the over one lakh weapons and thousands of tons of explosives and an assortment of military equipment captured by the security forces come from?Kashmir Valley was very peaceful without any disturbances ever since Independence in 1947 till about 1980, a period of over three decades. Disturbances over the plebiscite issue or Kashmir’s accession to Pakistan were never witnessed. What has changed? Obviously, militancy in Kashmir is a result of direct interference by Pakistan in India’s internal affairs. The seeds of dissent were spread after Zia-ul-Haq became Pakistan Army’s Chief in 1976. The answer to peace in Kashmir may well lie in keeping Pakistan and the separatist leaders under constant multiple pressure with no letup in sight.

Brigadier V Mahalingam is a veteran Army officer and a NOIDA based defence analyst.

LET THE ARMED FORCES DO THEIR JOB

WHAT HAS EMBOLDENED THE KASHMIRI YOUTH?