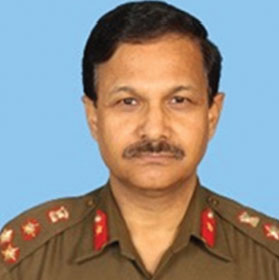 Richard Engel said, “Everyone knows what can happen to soldiers who are in front line units.” On 26 May 1999, Major Sonam Wangchuk, was ordered to move along with an adhoc company of Ladakh Scouts to Handen Brok, a remote post in Batalik Sector. He was asked to reinforce the post and be prepared to undertake patrolling and surveillance activities along the Chorbatla axis. It was appreciated that intrusion by Pakistan Army was least likely in this sector due to extremely difficult terrain. Major Sonam was tasked to carry out patrolling and establish a surveillance post on a ridge dominating the Line of Control (LOC) at a height of 18000 feet. The LOC was at a distance of 35-40 km from the road head. Sonam moved on foot with limited logistic support and on weapon scale of ammunition. This was all that they could carry as they had no porters or mules. After reaching Handen Brok, the company headquarters had no information of any movement of the enemy along the Chorbatla Axis. Without resting, Sonam moved ahead to the designated site. After patrolling the area, he established an administrative base and vantage point for surveillance so that they could keep the ridge line under observation. Having satisfied himself, Sonam left behind a patrol party of one JCO and 10 men with a light machine gun. With the rest of his men, he then proceeded back to Handen Brok for further tasks. 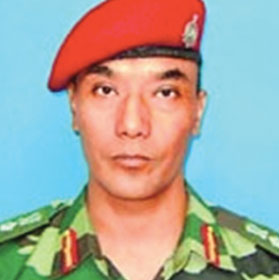 Sonam had no artillery support, no long distance communication, no mountaineering equipment and no mortar support. He was carryingammunition only for a short duration engagement and he had no reserves at his disposal for any serious contingency. His men were equipped with winter clothing that did not provide camouflage in snowbound area. This clothing was also unsuitable for super high altitude regions. It was however fortunate that Sonam’s surveillance post was on the ridge, for soon they came to know that there was a heavy concentration of Pakistani troops on the reverse slope, in a bowl, with well laid out camp of a company strength. They then observed that a party, led by skilled mountaineers, was making their way up with the help of ropes to a location on the same ridge where they were deployed. Had the enemy reached the ridge before Sonam’s troops, they would have had complete control of the ridge. It transpired that besides a company, a full enemy battalion was waiting to establish a strong foot hold over the ridge.

The detachment commander, Naib Subedar Thondup Dorje now realised that his best opportunity to defend his post would be to deter the initial assault. He therefore allowed the enemy to come close to the surveillance detachment and then opened fire, killing three leading soldiers. The Pakistanis reacted violently, but the detachment stood firm and held on to their position.

When Major Sonam was informed about the engagement, he immediately informed his unit and sought permission to take charge of the situation, after linking up with his men who were under fire from multiple directions. He was however asked to hold back since there was no intelligence report of any intrusion or build up in Chorbatla axis and his superiors at that point appreciated that his requirement in other areas was more pressing. Sonam, normally a very humble and pleasant soft spoken officer told his second in command in no uncertain terms that his men are facing hell and if permission was not granted, he would still move to reinforce his men. Permission was then accorded and Sonam with the troops at his disposal, which was just about half the strength of a normal rifle platoon moved to link up with the surveillance detachment. He moved ahead with just four men, literally running for eight kilometres in knee deep snow to link up with the surveillance detachment, with his Senior JCO, Subedar Tshering Stobdan bringing the rest of the party. As Sonam approached the administrative base of the surveillance party, he could hear the sound of heavy firing. Unmindful of his safety, he moved forward, but before he could link up, his party also came under fire of heavy machine guns and one of his boys was fatally wounded. By this time, the enemy had occupied part of the ridge, and was gaining dominance. Sonam realised that he had to do something extra ordinary, otherwise he along with his men would all be killed. Since he was already under fire from the enemy, he asked Sub. Stobdan who was following him to take a detour and climb the ridge line from the opposite direction to outflank the enemy. They had no time and opportunity to cook food so he asked his men to just survive on sattu (roasted gram flour) before they threw themselves to the wolves.

He was praying for the safety of his men who had refused to withdraw despite grave threat to their lives. At that time, two divine interventions took place. The first was that a snow blizzard now set in and fog covered the entire valley. “God has created this cover to give me one last chance to defeat the enemy,” was the thought that went through his mind. “let me live for something rather than die for nothing,” was the other thought that came to him. At the same time, providentially, Sub Teshering Stobdan’s party also moved without being detected right under the nose of the enemy to a vantage point. Before the enemy realised it, Sonam had linked up with the surveillance team on one side and his party under Sub Stobdan had occupied the other spur on the opposite side, sandwiching the enemy in between.

Sonam however was conscious of the fact that his men were outnumbered by the enemy and were also short of ammunition. Their ability to fight for long was limited. He took a chance and decided to raid the enemy post with just a section, with the JCOs party on the other side providing fire support. Unmindful of his safety, he moved closer to the post and executed a classic raid on the enemy from an unexpected direction. The enemy post that had close to two sections was taken by surprise and they scattered, some of them jumping downhill with their weapons and the others crawling down to take cover among the rocks. The Pakistani company disintegrated, leaving behind eight dead. Many of the enemy were wounded. They also left behind a huge stock of weapons, ammunition and assorted logistics including classified documents that nailed the Pakistani lie of intrusion across LOC. 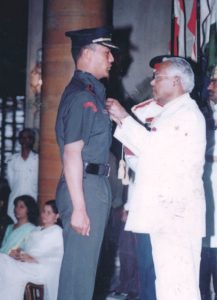 The impact of this sudden attack so unnerved the enemy that he abandoned the positions that had been established along the ridge at the height of 18000. Had the enemy known that it was just a platoon strength against them, they probably would have held on, but the outflanking move gave an impression of a much larger body of troops. Sonam knew that there was no immediate reinforcement available, so he asked his men to conserve ammunition and instead of firing they resorted to rolling of stones at the retreating enemy. His men collected rations and whatever logistics stores that could be retrieved from the enemy, for their own use. Sonam had no means to communicate what was happening in sub sector Chorbatla. After he had stabilised the situation he sent his NCO to inform his battalion HQ of what had happened and asked for replenishment of ammunition and logistic support. It was through an intercept of Pakistani communications that own Division Headquarters learnt of this action and of the heavy casualties suffered by the enemy in the Batalik Sector and of the fact that some dead bodies of Pakistani soldiers were still lying on the slopes.

This was the first decisive victory in a tactical engagement that the Indian Army achieved during the Kargil War. More were to follow. I later asked Sonam whether he was aware that he had laid the foundation of one of the most spectacular military victories in history with no parallel? The humble soldier replied, “No sir, my main focus was to be with the men at the time of the crisis and to prevent harm coming to them and to the nation”. François de la Rochefoucauld said, “True bravery is shown by performing without witness” and Sonam executed his task in most simple manner without anyone even knowing about it. For this action Major Sonam Wangchuk was awarded the Maha Vir Chakra. Ki Ki So So Lhargyalo.

A TOUCH OF GREATNESS