SUN TEMPLE – MODHERA A BLEND OF SCIENCE AND ART

Standing majestically on the banks of the Pushpavati River, the exquisite Sun Temple at Modhera, in Mehsana district, Gujarat, is one of the seven Sun Temples in India and is a wonder to behold, blending science with art. Built in 1026 CE by King Bhim Dev of the Suryavanshi Chalukya dynasty, the temple complex comprises three parts: the Gudha Mandap (Shrine Hall); Sabha Mandap, (Assembly Hall) and the Surya Kund (Reservoir).

A rectangular stepwell on the eastern edge of the complex is what welcomes a visitor on arrival. In its prime it had 108 shrines around it, dedicated to various deities. One could take a holy dip in the reservoir and then in one ‘pradakshina,’ complete the entire prayer sequence that one covers with the 108 rudraksh mala. The stepwell with its fascinating geometric patterns is today home to tiny fish and mischievous turtles who plonk into the water as soon as they sense us approaching.

The second structure, the Sabha Mandap, was used for public functions. Made of 52 beautifully carved pillars, the hall is ventilated from all sides. The circular ceiling is intricately carved and is perhaps one of its most photographed features.

The Gudha Mandap is the main temple, dedicated to Aditya, the Sun God. Placed above a deep plinth which stored gold and jewels, the Deity rode a seven horsed chariot with Arun as the charioteer. Made entirely of gold, the crown worn by the Sun God held a large diamond. The temple was so designed that each morning, the rays of the sun would first touch the Deity’s feet and then slowly move up to the crown. The residents of the village have believed for centuries that when the Temple was intact, then on the two equinoxes, when the rays of the sun would strike the diamond on the crown, the refraction would light up the whole Gudha Mandap.

When we visited the temple, we were shown around the complex by the guide, Shri Girish Goswami who introduced us to his colleague Shri. Vipul R Raval. At the equinox, Raval, with the watchman to keep him company, took it upon himself to be present at the Garbhgriha and witness in person the dazzling brilliance of the sun rays entering the mandap. The photographs he took are breathtaking and are shared here.

Sadly, today there is no gold or reigning deity, but knowing of India’s past, where it was called a ‘sone ki chidiya’ the murti of Sun God made entirely of gold with a diamond in the crown doesn’t seem farfetched. With the sun rays emerging as seen in the photograph of the equinox, one can imagine just how brilliantly the garbhgriha must have been lit up on the equinoxes. What would one not give to go back in a time machine to witness such a wondrous sight! The people at the time evidently had deep knowledge of geology, architecture, movement of celestial bodies, refraction of light and geometry to be able to build the temple at the exact point on the Tropic of Cancer to make the sun rays connect with the diamond with such precision.

everything from birth to death, flora-fauna, music and dance. Also depicted in detail and without prejudice, all together in one wall are sculptures on dharm (law), arth (finance), kaam (sexual desire) and moksh (salvation).

The sculpture that impacted me the most was of a pregnant woman being assisted, as she gave birth ‘in water’. Water births have gained prominence only a few years ago, but the knowledge was so common then, that it made it to the temple sculptures a thousand years ago. 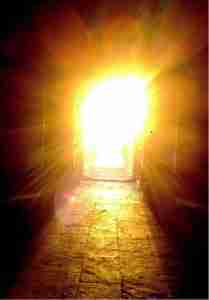 The 24 pillars in the temple represent the 24 hours of the day, the 12 statues of Surya Dev represent the 12 rashis (months), the 7 horses on the chariot stand for the seven days of the week. The temple stands on 364 elephants which stand for the number of complete days that a year has. The entire structure is placed on carvings of inverted lotus petals (a flower which responds to sun rays). 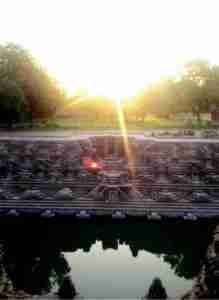 Even though this beautiful marvel was looted by the likes of Ghaznis and Khiljis and even though it has seen a thousand years, the calming Modhera temple stands tall and proud today — telling of its illustrious past and of the progressive people it came from. It is heartening to see that the monument is beautifully maintained by the Archaeological Survey of India, the premises are spotless, and the surrounding lawns lush green and clean. One leaves the complex feeling good… and a calm sense of pride which inspires us to better ourselves and our nation.