Presenting an overview of the Indian Navy during his pre-Navy Day (04 December 2018) interaction with the media, the Chief of Naval Staff, Admiral Sunil Lanba, shared significant inputs about the Navy’s current and future acquisitions.

The Admiral began with a reference to the Navy’s successful completion of the first deterrence patrol of the nuclear-powered and ballistic missile armed submarine INS Arihant in 2018, marking India’s operationalization of the third and the most survivable segment of the nuclear triad. Arihant is the Navy’s 16th submarine. Admiral Lanba thereafter also elaborated on important acquisitions of various vessels and aircraft.

While five vessels were inducted in the Navy during 2018, there are currently36 ships and submarines presently under construction in Indian shipyards. These include the aircraft carrier, Vikrant, P-15B Class Destroyers, P17A class stealth frigates, P28 ASW corvettes, offshore patrol vessels and Scorpene class submarines. In addition, Government’s approval has also been accorded for 56 ships and six submarines.

The Indigenous Aircraft Carrier, presently in its third and final phase of construction at Kochi, is scheduled for sea trials to commence in mid 2020, with all stakeholders working closely to achieve the delivery timelines. Induction of Vikrant will provide significant fillip to the Navy’s blue water capability, increasing the reach and impact of carrier borne strike forces, both as a means of deterrence as well as during combat operations.

Modernisation of the submarine arm is also well underway. The second Scorpene Class submarine Khanderi, has completed her major trials and is expected to be ready for commissioning shortly. The third and fourth submarines of this project namely Karanj and Vela are also undergoing various stages of pre-induction trials.

On the naval aviation front, a long standing critical shortfall in the naval helicopter fleet has been finally addressed with the accord of AoN for 111 utility helicopters in August 2018 and issue of LOR (letter of request) for 24 multi role helicopters in November 2018.

2018 year end marked the Navy acquiring another significant capability, placing it in a select league of navies capable of providing submarine search and rescue in the Indian Ocean Region. While the first Deep Submergence Rescue Vehicle (DSRV) system was operationalised at Mumbai in December 2018, the second DSRV system will be operationalised at Visakhapatnam by March 2019.

During 2018 there was a positive upswing towards contract conclusion in major shipbuilding projects, the salient ones being for procurement of two Diving Support Vessels with M/s HSL, Vizag, two follow-on ships of 1135.6 Project to be constructed at Russia and four Survey Vessels (large) with M/s GRSE, Kolkata. During this financial year, contract conclusion of 1135.6 (ex-GSL) and ASW-Shallow Water Craft are expected and hopes are high that in the coming months, projects related to LPDs, Fleet Support Ships and Mine Counter Measure Vessels will also move forward.

For infrastructure growth, Phase IIA of Project Seabird at Karwar is progressing well. A full-fledged Naval Dockyard and associated infrastructure to accommodate more ships, submarines and yard-craft is being undertaken during this phase. Andaman and Nicobar Islands’ infrastructure development includes a Naval Air Station at Shibpur, which provide enhanced connectivity to Northern Andaman Group of Islands as also increase surveillance capability in the region.

In January 2019, the Government sanctioned, three new Naval Air Squadrons to be setup in Gujarat and Tamil Nadu. Besides this, the Government has also sanctioned manpower towards manning additional aircraft in existing Dornier Surveillance Squadrons in Kerala and Andaman Islands. The contract for procurement of 12 Dornier aircraft was signed with HAL (Kanpur) on29 December 2016 with delivery commencing in January 2019. This is a substantial contract for the indigenous HAL built Maritime Surveillance version of the new Dornier 228 aircraft, fitted with improved state of the art sensors and equipment which includes glass cockpit, Advanced Surveillance Radar, ELINT, Optical sensors and networking features. The aircraft would enhance Maritime Domain Awareness (MDA) of Indian Navy through round the clock sensor based surveillance and provide targeting data in areas of operation to ward off terror and other threats from sea. This addition would further strengthen Indian Navy’s efforts at coastal security of India’s vast coastline of over seven thousand km.

The Defence Acquisition Council (DAC), in a recent landmark decision approved indigenous construction of six submarines for the Indian Navy at a cost of over Rs. 40,000 crore. This is the second project under the Defence Ministry’s ambitious Strategic Partnership (SP) model that aims at providing a significant boost to the Government’s ‘Make in India’ programme. SP model envisages indigenous manufacturing of major defence platforms by an Indian Strategic Partner, who will collaborate with foreign OEM to set up production facilities in the country. The model has a long term vision of promoting India as a manufacturing hub for defence equipment through transfer of niche technologies and higher indigenous content thereby enhancing self-sufficiency for meeting the future requirements of the Armed Forces. This approval is the second such project following indigenous production of 111 Naval Utility Helicopters that was approved in August 2018. Construction of six submarines under Project 75(I) will provide a major boost to the existing submarine design and manufacturing eco-system in India through transfer of design and equipment technology as well as necessary skills.

As per Indian Navy’s maritime capability and its perspective plans the current strength of 150 ships/submarines and 250 aircraft is aimed to be increased to 200 ships/submarines and 500 aircraft.The Indian Coast Guard (ICG) also acquired/contracted a large number of ships and shore assets over the past year.

On 24 October 2018, a new 3,000 tonnes displacement state-of-the-art training ship, ‘ICGS Varuna’ was launched at the shipyard of Reliance Naval & Engineering, located at the Port of Pipavav,Gujarat. The training ship has the primary role to impart sea training to officer cadets, The105 meters long vessel with a capacity of accommodating 242 personnel, is powered by twin diesel engines of 10,400 KW and can move at a speed of 20 knots. Equipped with weapon systems, it is capable of policing India’s maritime zones as well as for search and rescue missions. The ship also has a twin-engine helicopter for undertaking maritime reconnaissance.

Varuna, a first-of-its-kind next generation training ship has been entirely designed by the Design Bureau of Reliance Naval & Engineering. Confirmatory model tests for the design were performed at the Vienna Test Basin, Austria and vetted by internationally acclaimed experts. The vessel will join the Coast Guardfleet in May 2019 after extensive tests and trials. During the launch ceremony, RNEL chief executive officer Debashis Bir, addressing the gathering disclosed that RNEL is currently constructing 20 ships of three different categories for the defence services. These projects include five naval offshore patrol vessels (for Indian Navy) and 14 fast patrol vessels, apart from the training ship launched (for ICG). Of this, six vessels are expected to be delivered in 2019.

Seven ship acquisition contracts for 51 ships/boats were signed during the last four years. ICG’s present fleet strength is 139. The XIII Plan (Coast Guard Definitive Action Plan 2017-22) caters for acquisition of 47 commissioned surface platforms. The acquisition is being appropriately planned in a phased manner to enable capacity building with focus on consolidation. 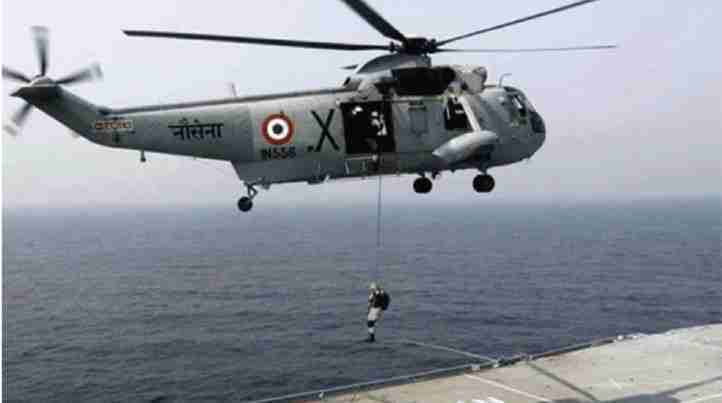 ICG, the smallest armed force under Defence Ministry, its jurisdiction of India’s coastline and Exclusive Economic Zone (EEZ) involves patrolling the distance between the shore and 12 to 200 nautical miles. Beginning with 74 vessels, the ICG’s fleet has grown to 162, including four advance offshore patrolling vessels, three fast patrolling vessels, two hovercraft and one harbour craft. Its air wing has increased from 44 aircraft in 2008 to 58 aircraft. It is expected toacquire 50 new vessels and around 40 aircraft in the next four years.

INDIAN NAVY AND THE RESURGENCE OF MARITIME AEROSPACE...

P-8Is TO GIVE FLIGHT TO NAVAL STRENGTH