SHAPING THE NARRATIVE IN WAR

Development of Social Media (SM) is a relatively new phenomenon. Between 2004 and 2014, all 22 of the world’s biggest Social Media (SM) networks were developed and launched. Facebook was the first to be started on February 4, 2004. The rapid global increase in mobile telephone usage helped the growth of SM. SM can be fun, exciting, entertaining and useful for maintaining relationships. For

marketing, managing their public image, connect with customers and solicit ideas and feedback people can use social media websites for professional reasons. SM can be used to issue warnings for cyclones, floods or other disasters. Homebound people who are ill, stay-at-home parents, or retired use social media to stay connected.

SM can also be used for political polarisation and radicalisation. SM is being used by both state and non-state actors to further their own interests.SM has been utilised to recruit terrorists, organise revolutions and riots, encourage attacks, collect funds, glorify gangs and spread violence. Terrorist organisations like al-Qaeda and the Islamic State exploit the social media to radicalise, recruit and deploy young people in service of their terrorist causes. The 2011 Arab Spring and 2011 London riots have shown how social media can impact matters of national security. A recent Oxford University study found evidence of disinformation campaigns run by state actors in more than 70 countries around the world. Most of these countries are authoritarian regimes that use SM to threaten activists and journalists with hate and violence, spread pro-government propaganda and drown out opposing voices.

Today 62 % of US adults get news on social media. While traditional media has lost credibility with readers, internet sources of news have actually gained in credibility. News business change with buzz feed. The majority of readers spend most of their reading time scanning headlines rather than reading the story. The headline and not the story has become the single most important element of the news. 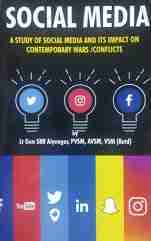 It knows which social media platforms and news websites you visit. The system dynamically creates content specifically designed for your specific psychological frame and achieve a particular outcome. Digital tools have terrific advantages over humans. Once an organisation creates and configures a sophisticated AI bot, the marginal cost of running it on millions of user accounts is relatively low. They can operate 24/7 throughout the year and respond to events immediately. In an information environment where the first story to circulate may be the only one that people register, even if it is untrue, this is critical.

The rapid growth of SM platforms has given non-state actors an asymmetric advantage because of the low cost of entry and the relative operational agility with which they can access and utilize new technologies. SM will make a significant impact in any future conflict. In 2012 during the Air campaign by Israel against Hamas militants ten million twitter messages in eight days were exchanged by online proxies of both sides to shape public opinion. It was the first twitter war.

For information operations, old methods of incorporating messages into newspapers and radio broadcasts have to be complemented by online methods to reach the widest targeted audience. To effectively shape the information environment during modern military operations this paradigm shift has to be recognised. Headquarters at each echelon must understand how to establish credibility and gain popularity through social media.

Lt Gen SRR Aiyengar had been the Indian Army’s foremost expert in Electronic Warfare and Signals Intelligence during his service. He was instrumental in introducing the concept of Information Warfare into the Army. He is the only officer who has been Commandant of three prestigious Category ‘A’ establishment viz Military College of Telecommunication Engineering (MCTE), Mhow, Defence Services Staff College (DSSC), Wellington and the National Defence College (NDC), New Delhi.

The General analyses the issues of SM in great detail in this book and very succinctly puts forward his views in a clear and concise manner. After retirement, he has been keenly following the contemporary issues which affect warfare. His book on “Military Ethics” has been a path breaker in modern Indian military writing.

The book is divided into an acknowledgements section, introduction, ten chapters, conclusion, bibliography and an index. Each chapter explains various facets of SM and its impact on specific issues of contemporary war/conflict. The first chapter pertains to Role of Media in Contemporary War. Information is being used to assert one’s narrative while attacking, distorting, disrupting and dividing the society, values and culture of the adversary. By using social media, a nation-state can win the war before it begins.

The second and third chapters address the Social Media (SM) and its overpowering Influence and SM as an Instrument of War and Power. The fourth and fifth chapters focus on the Impact of SM on Military and its Fallouts and Internal Security Threats to India and Role of SM. This chapter is extremely important for anybody who is dealing with internal security. Especially important is his views on the influence of SM in combating insurgencies in J&K, North East and Left Wing Extremism.

The sixth and seventh chapters discuss the SM Instrument of Perception Management and SM and Psychological Warfare. With advancements in technology information and psychological warfare has moved away from conventional space to cyberspace. SM platforms have become the weapon of choice for nation-state actors in defining mass narrative on an issue. It is also being used to change audience behaviour and views.

Chapter eight discusses the use of SM and Cyber Warfare. Cyberspace presents new challenges and requires dramatic changes in strategic thinking regarding national security and Counter-Insurgency and Counter-Terrorism (CI/CT) operations. Strategic thinkers have to look ahead to future developments and emerging social media for effective CI/CT operations. Social media platforms can serve as a new tool of collection and dissemination for these activities. Through the skilful use of social media, information operators may attempt to, recruit supporters and financiers, distort public discourse or affect political or military outcomes. These activities can be done without significant cost or risk to their organisers.

The ninth chapter chronicles SM and the Military. Social media is integral to the conduct of operations. In the real-time information environment created by social media, operational commanders at every level will need simultaneous and identical situational awareness of current events. A social media capacity needs to be built into every level of command. In order to integrate social media into operations, each of the staff functions needs continuous access to the Internet. Social media should be integrated into all training exercises. Within headquarters, the responsibility for social media needs to be clearly articulated.

Growth of the Internet and the rise of social media and big data analytics in the past two decades have revolutionised open-source intelligence (OSINT). The OSINT aspects have been highlighted. Social Media Intelligence (SOCMINT) defined as “the analytical exploitation of information available on social media networks” could have been elaborated. The real-time, first-hand accounts of the ground situation that social media provides constitute effective indications and warning (I&W) provider for dynamic ground situations where traditional intelligence collection methods are challenged

The tenth chapter is on The Elusive Future of SM – Quo Vadis?The introduction and conclusion are well developed. SM, a relatively new development in the internet and media, and its effects on modern warfare have been analysed in great details and comprehensive deductions have been drawn.The book is extremely well-written. The SM is having an immense impact on how contemporary warfare is being conducted by authoritarian states, such as Russia and China and radical Islamist terrorist entities, such as Hamas and the Islamic State. How China used SM could have been a welcome add on.

The book is a must-read for anybody who is interested in modern conflicts.

Maj Gen PK Mallick, VSM is from Corps of Signals, specialises in Cyber, Signals Intelligence and Electronic Warfare issues. He has been Senior Directing Staff (Army) at National Defence College. He does free lance writing, enjoys travelling, interested in Military History. He runs a blog site and website http:/ / strategicstudyindia.blogspot.in and http:/ / indianstrategicknowledgeonline.com for benefit of people interested in strategic issues

THE REALITY OF INDIA-SRI LANKAN TIES