Radiological Materials transmit radiation energy in the form of Alpha and Beta Particle, Gamma rays and neutrons. Human beings exposed and contaminated with radiations suffer from radiation sickness which with high doses of exposure results in prolonged illness and death. From out of about a hundred Radio Isotopes, some with higher half-life could be used as material for Radiological Dispersal Devices (RDD) or what is generally referred to as “Dirt Bombs”. RDDs, aren’t actually nuclear weapons. though they distribute a small amount of radioactive material upon detonation. A Dirty Bomb would not cause catastrophic levels of death and injury but could leave billions of dollars of damage due to the costs of evacuation, relocation, decontamination and clean- up, hence their reputation as “weapons of mass disruption.” 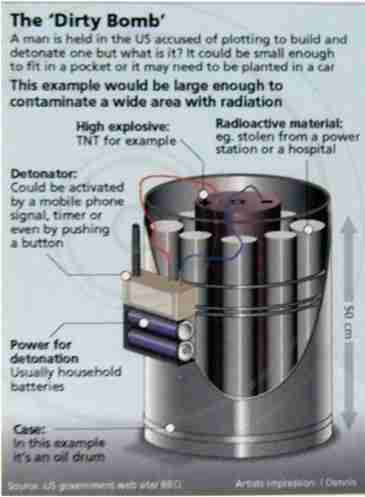 Radiological materials have many civil applications and are extensively used in medical diagnostics equipment, steel and other manufacturing industries, power generation, Oil drilling, space ships, and food irradiation. Therefore, the accessibility of these materials from these sources to the terrorists for malevolent use. The International Atomic Energy Agency (IAEA)’s Illicit Trafficking Database (ITDB) provides information on the vulnerability of nuclear and other radioactive sources worldwide. According to the database, a total of 2,734 confirmed incidents of either unauthorised possession and related criminal activities, including theft of sensitive nuclear material and radioactive sources across the world during the period 1993-2016. The IAEA reported persistent problems with illicit trafficking in nuclear and other radioactive materials, with thefts, losses and other unauthorised activities and events. Occurrence of such incidents is an indication of failures in systems to control, secure and dispose of radioactive materials and also show the weaknesses of regulatory systems.

Some reports out of Iraq warn that Islamic State may have already stolen enough material to build a dirty bomb that could contaminate major portions of a city and cost billions of dollars in damage. Some other terrorist groups have expressed interest in radiological attacks, most notably al- Qaeda. With numerous statements on the issue, Osama bin Laden has made no secret of his desire to acquire nuclear and radiological materials. Other Terrorist organisations operating in Chechnya, Afghanistan and Pakistan have evinced interest in RDDS—a new weapon of terror. Terrorists are more likely to use a dirty bomb than other radioactive devices because dirty bombs are less technically complicated to build and require materials that are relatively easy to obtain. The effects of RDD used against population and commercial centres could meet multiple goals that terrorists might have, which include in the sequence in which they might occur: Prompt casualties, which would most likely come only from the explosion would be few in number; Large scale fear and panic potential as even an attack that released little radiation might cause panic; Economic disruption as the commercial activities might be suspended for a long time due to contamination; Asset denial—public concern over the presence of radioactive material might lead people to abandon a building, subway system, or an area of a city for months; Decontamination and Clean up, which might be done at very huge costs ; Long-term casualties resulting from exposure to or inhalation of radioactive material and more speculatively the publicity and media attention the terrorists gain from such attacks.

A radiological attack involves the release of radioactive material in ways other than with a nuclear weapon. The methods of radiological attacks could be:
•Radiological Dispersal Device, a conventional or improvised explosive device packed with radiological material which will be dispersed over a target area;
•Radiation Emission Device (RED) simply emits radiations, for large irradiation of an area;
•Radiological Incendiary Device (RID) would couple an explosive device with incendiary material to complicate first responses;
•Aerial Delivery using drones and air craft—to disperse powdered or aerosolised forms of radioactive material.
•Radiation Poisoning—Contaminate food, beverages, water supply systems.

The purpose of a radiological weapon is to disperse radioactive materials or emit ionising radiation from a stationary or mobile radioactive source. The RDD encompasses the largest variety of mechanisms, which could include explosive or non-explosive and passive or active means, to spread radioactive material. The RED refers particularly to a stationary or mobile radioactive source that emits radiation. Terrorists, or other malicious people could use RED to expose many people, few people, or just one specific person to ionising radiation. The terrorists would typically want to instil fear in many people and in contrast, a criminal would most likely try to harm or kill one or a few people; as was the case in the 2006 poisoning-murder of Russian dissident Alexander Litvinenko, who died after ingesting polonium-210. The RID refers to a device that couples fire with radioactive material and reason a terrorist group may want to use RID is to complicate firefighters’ efforts to rescue people and protect property. Emergency responders would have to contend not only with public panic in regard to the fire, but also with the rapidly spreading radioactivity in the area. There exist several generalised human exposure pathways for the materials that would be dispersed in an act of radiological terrorism: external exposure, inhalation, ingestion. External exposure the most commonly considered pathway is typically associated with gamma emitters, since alpha and beta particles have a low ability to penetrate human tissue. Inhalation requires that a terrorist convert the radioactive source into an aerosol form in order to create particles small enough to be suspended in air and drawn in through the nose and mouth. Common inhalation scenarios include dispersal through ventilation systems, sprays, powders, or the small micron and submicron-sized particles that could result from a RED. Inhalation is overall the most damaging exposure pathway, especially with alpha emitters. However, it is rather challenging and complex to effectively execute on a massive scale. The ingestion pathway is also fraught with difficulty since the primary scenarios – contamination of the water supply, agriculture, or food production and processing encounter vexing but not intractable problems of scale (the radioactivity would be quickly diluted) and of access. It should also be noted that particles small enough to be inhaled could also be ingested. Except in cases where soluble radioactive materials are dispersed, ingestion pathway is generally less serious than that of inhalation because digestive system would cycle the material out of the body with relative speed, limiting the amount of exposure to radiation. Because RDD attacks might occur from radiological material obtained from multiple sources, international community and organisations are working hard to secure sources worldwide. The IAEA, has responsibilities in such areas as nuclear energy, peaceful applications of nuclear science and technology, nuclear non-proliferation, and nuclear safety and security. It has the lead international role in efforts to secure radioactive sources. It issued a Code of Conduct on the Safety and Security of Radioactive Sources. Its 2010-2013 Nuclear Security Plan covers the global nuclear security framework, nuclear security services, and security improvement. It helps countries remove orphan radioactive sources; provides training in Asia, Africa, and South America for regaining control over sealed sources; and trains customs authorities in radiation monitoring. It maintains an International Catalogue of Sealed Radioactive Sources and Devices to help identify sealed sources so they can be handled safely. In June 2002, the G8 countries committed to prevent terrorists or those that harbour them from acquiring or developing CBRN weapons, established the G8 Global Partnership against the spread of weapons and materials of mass destruction, and raised huge finances for projects supporting the partnership to reduce CBRN threats. 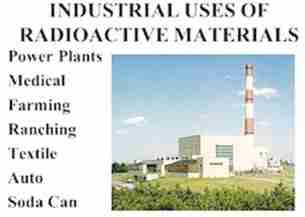 Global Initiative to Combat Nuclear Terrorism(GICNT)was established in 2006 by thirteen nations. Its principles include: develop and improve accounting, control and physical protection systems for nuclear and other radioactive materials; improve the ability to detect nuclear and other radioactive materials in order to prevent illicit trafficking; co-operation in the research and development of national detection capabilities that would be interoperable. Some of the programmes seek to identify, secure, remove and/or facilitate the disposition of high risk vulnerable nuclear and radiological materials around the world, as quickly as possible, that pose a threat to the international community. National Nuclear Security Administration (NNSA) program of the US, strengthens the capability of foreign governments to deter, detect, and interdict illicit trafficking in nuclear and other radioactive materials across international borders and through the global maritime shipping system. Programmes are in place tohelp regulators in other nations implement the IAEA Code of Conduct, such as by helping them develop national registries of radioactive sources, with safety and security regulatory oversight, and holding workshops that describe the requirements for physical protection of materials.

Despite many international and national efforts to secure radioactive sources, vulnerabilities do persist. The international community should work in unison and a common objective to preventive radiological material falling in to the hands of terrorists and their use against population centres. Coordinated and cooperative efforts are also required to mitigate possible effects of radiological devices on humans and commercial interests.

Col Naidu Gade was commissioned in the Corps of Combat Engineers and commanded an Assault engineer Regiment. He is a qualified CBRN and C-IED Professional and has served as Joint Director for CBRN Defence. Presently, he is Chief Consultant with ‘CBRNe Secure India’ a ‘forum and a knowledge centre’ for bringing in awareness on the threats arising from the use of CBRNe material and their disastrous consequences.