PASSING OUT PARADE OF 3rd COURSE, THE FIRST UNDER ALL INDIAN INSTRUCTORS

As far as military training went, the IMA always compared most favourably with the world’s best military academies. That fine tradition of efficiency has not been lost one whit, and in addition it has become the training ground of the country’s leaders, the Alma Mater, or the bounteous mother, who will nurture her youth to serve the motherland selflessly.

I cannot but help often recalling the Passing Out Parade of the 3rd Regular Course on 11th September, 1948 when 185 Gentlemen Cadets received their Regular Commissions. While this parade has always been the great function of the IMA, but this particular Passing Out Parade had great significance for all of us. I was naturally thrilled to watch the first product of an all Indian instructional staff, and I had satisfaction of seeing the finest drill which has been seen for many years.

I can vouch that such remarkable precision in the intricate movement of the drill square combined with soldierly carriage and smart turnout is the finest in our country and I shall go further and say with a feeling of pride, that such superb drill will do credit to Sandhurst and West Point.

All the cadets marched past in slow time in close column followed by a march in quick time. They then formed into a square to hear the address of the Defence Minister, after which the Gold Medal (the recent substitute for the sword of honour) was awarded to GC Narindar Singh and the Silver Medal to GC Sowani, both of who fully deserved these two coveted prizes of the Academy. After the parade the spectators were treated to coffee and light refreshments.

After all these War years the Academy has certainly recaptured much of the old peace-time atmosphere, and brought that institution nearer to the hearts of all Indians. The IMA band played a selection of soft music, and the inspiring stains of the National Anthem could not be forgotten long after it was over. The dance in Chetwode Hall added greatly to the colour and charm of the occasion, and the band of my regimental centre- the 5th Gurkha Rifles-was in attendance and played the usual jazz tunes.

The traffic and seating arrangements carried out with meticulous care for details deserve a word of praise. There were about 5,000 spectators — easily the largest gathering which has ever watched a Passing Out Parade in the IMA – and everybody knew where to go and how to find their own seat.

Personal encomiums must always be avoided, but I cannot help mentioning that Brig Thakur Mahadeo Singh, the Commandant and ‘Smoky’ Malhotra, the Adjutant, deserved to be congratulated for the first fruit of their labours, which beyond any shadow of doubt was of the highest quality. I feel very proud indeed of this noble institution of the Nation, and of the achievements of my brother officers who have given their very best in the service of their country. Long live the IMA. 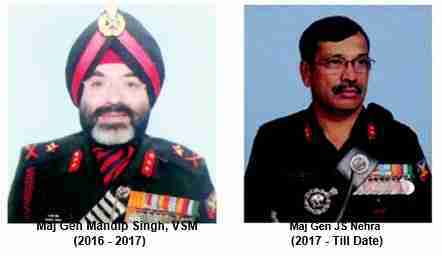