Residing in Vadodara, when we realized that the Southernmost city of the ancient Indus Valley civilization is almost in our backyard, we immediately set off to visit it. The roads were fantastic and GPRS led us right up to the humble board welcoming us.

Excavated by Prof. S.R. Rao (Archeological Survey of India, ASI), from 1955-62, Lothal is home to the remains of an ancient civilization that once thrived here. An informative and well stocked Museum situated nearby gives detailed insight into the exceptional knowledge and skill that existed in those times.  The site today is an expanse of brown as not much can grow on the saline lands. Other than the few local trees and shrubs, the only other bit of greenery were the plants installed by ASI in individual containers.

The first thing that one notices is an oblong basin, which once used to be a dockyard. It is believed to be the world’s earliest known dockyard and was in use as recently as 1850. It was built after the river flow tides of the region were studied in detail by engineers of the time. There were provisions for both escape of excess water and to maintain a minimum column of water so that ships could pass at all times. The precious wares offloaded from the ships were stored in large warehouses wisely constructed on higher grounds, to protect them from floods that the region was menacingly prone to. They were constructed close to the commercial hub, the Acropolis, from where they were supervised. There is evidence of trade between Lothal and the region which is now called West Asia.

The baths were waterproof and the drainage at par with modern designs. The site is a wonderful example of community living as demonstrated by the master kitchen where food was made for everyone and they all ate together. The main well deserves mention for its intelligently designed radial bricks, which when aligned together, formed the circular outline of the well. It is now covered with a metal mesh to prevent garbage from falling in. However, one finds a few coins lying at its bottom, perhaps some visitors mistakenly believing it to be a wishing well! 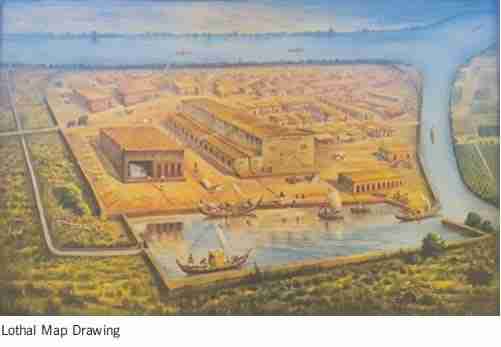 It is fascinating to observe the remains of a kiln where the bead factory used to be.  Not far from it lie the remains of the marketplace where trade would take place. The market certainly must have been an exciting place to be in, with a host of gorgeous wares to see and buy. The museum has specimens of most of the artifacts created or traded here. Beads so small and find  that  they look  like  grains of sand unless looked at through a magnifying glass; jewellery made of terracotta, copper, stone, semi-precious materials; massive collection of realistic seals, many of them depicting animals and religious symbols of the time; various objects of daily use in copper and bronze; magnificent painted clay pottery which has somehow survived to this day, and innumerable toys. Also noteworthy are the precise weights and measures and the instruments of measurement, catering to minuscule weights, heavy weights and measuring length as well. The metallurgy and art were highly advanced as evidenced by the gold ornaments, shell instruments, exceptionally high-grade copper, tools, vessels, and musical instruments. For me, the most fascinating artifact was the miniature jar painting of ‘The Thirsty Crow’. Evidently, that famous story appears to be of Indian origin! 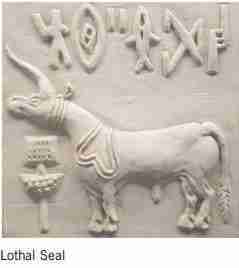 The people of Lothal worshipped the Fire God and conducted religious ceremonies around the fire. They buried their dead. The most fascinating is the twin burial (on display at the museum) where two people are buried together! They braved numerous floods and storms throughout its time and as Lothal prospered, it grew in size too. It possibly caved into one of the stronger floods that hit it, leaving behind only the foundations and lower walls made from fire dried bricks; washing away forever, the rest of the structures perhaps made from sun-dried bricks. 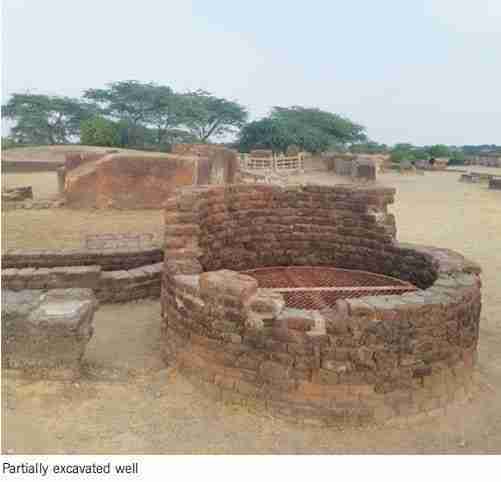 While efforts are on to preserve the architectural site, prolonged exposure to rain and sun are damaging it each year. The preservation so far is good and the museum lovely, but a lot more will be needed to protect it from the natural elements, which have led to its annihilation already once before.

Aarti Pathak is a mother of two young children and resides in Vadodara, Gujarat. A prolific writer she is present, C.E.O. and Editor at Bonobology.com. She blogs at                https://sparrowtimes.wordpress.com

THE INDIAN OCEAN: TIME FOR A NEW MARITIME ORDER