Khukri’s origin goes back to ancient times; it is not only the national pride of Nepal but is also symbolic of the Gurkha soldier. The Khukri has been used for almost everything—fighting battles, in religious functions and as a utility tool. Khukri is not only a national weapon of Nepal but is the most commonly used multipurpose tool in daily household chores, from building, clearing, chopping firewood, digging, slaughtering animals for food, cutting meat and vegetables, skinning animals, and opening cans.

The Khukri came into prominence during the Anglo-Gurkha ‘Kalinga War’ between the Gurkha soldiers and the British Army in1814, when the Gurkhas from Nepal invaded the Garhwal region. The power of the flashing Khukris was first faced by the British during this battle. The Gurkhas captured the KalingaFort in Nalapani (Dehradun) but were finally defeated by the British Army. Khukris have seen actionin Anglo-Afghan Wars, Sino- Nepalese War, Nepalese–Tibetan War, First World War, Second World War, 1962 India-China War, 1965 Indo-Pak war, 1967 India-China border skirmish in Sikkim, 1971 Indo-Pak War,1999 Kargil War, CI Operations, the Falklands War and the Afghan War.

The successful war campaigns and swift victories of Gurkha soldiers is often credited to this most practical weapon—the ‘Khukri’. Custom of carrying the Khukri started under the British Indian Army and was continued in the Indian Army. All Gurkha troops are issued with two Khukris—one for ceremonial functions and the other one for exercise. However, troops generally carry with them their home made Khukris on exercises. A Gurkha soldier, in the final charge or in close combat, unsheathes his Khukri and makes his final “do-or-die” run on the enemy shouting his war cry “Jai Mahakali – Ayo Gurkhali”.

Khukri is a personal weapon of the Gurkhas and symbolises pride and valour. They carry it the way the present generation carry their mobiles. Generally, it is carried in a leather case (scabbard). Khukri is a characteristic weapon of the Nepalese Army, theRoyal Gurkha Riflesof the British Army, theGurkha regimentsof the Indian Army, the Assam Rifles, the Assam Regiment and the Garhwal Rifles. Khukri monograms are also used as the national monogram and in Nepal, indicate Army ranks. Some Khukris have decorative scabbard with beautiful wooden, horn, silver, brass work and sometimes ivory. It is customary in Gurkha battalions to present a retiring officer with a Kothimoda Khukri (silver case) for the association with the regiment. Khukri scabbard also has two pockets at the back that carry two mini knives one called ‘Chakmak’ for sharpening the Khukri blade and also for striking sparks from flint and the second a little sharp knife called ‘Karda’ used as a small multi- purpose utility knife. Shapes and sizes of Khukris vary from place to place. 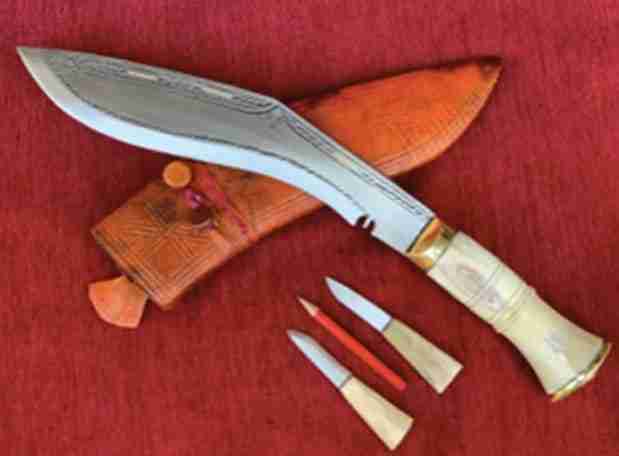 The myths that have spread over the centuries, particularly in the western world, have made the Khukri a subject of interest and knowledge and a collectors item for knife collectors. It is believed that a Gurkha soldier survived in the Malayan jungle alone for seven years by his Khukri. The Khukri is more than just a knife or a weapon in Nepal because of its religious values and beliefs in the Nepalese society. The most appealing and distinctive part of the Khukri is the notch cut into the blade directly in front of the grip. This notch arouses much interest because of its unique shape and utility objectives. Practically, the notch works as a blood dipper to prevent the blood or fluid from going towards the handle. Similarly the notch also has religious significance as it signifies OM and represents the sacred cow‘s hoof. This notch can also function as an opener.

Khukri is also worshipped on different occasions. During ‘Dashain’ (Dushera), Nepalese main festival; the Khukri is worshipped and then put to action by sacrificing domestic animals as offerings to goddess Durga. This sacrificial tradition continues in the Gurkha battalions to seek blessings of goddess Durga on the battalion and its soldiers. The Khukri is believed to have spiritual power to scare off demons, evils and nightmares and is thus kept under the pillow of a man or a child who suffers from sleeping disorder. Similarly in Mongolian ethnic groups like Rai, Limbu, Gurung, Magar and Tamang etc, a Khukri is also cremated along with the dead man in a belief that the Khukri would defeat Satan, so that the departed soul could go to heaven and rest in peace. (However, I have not seen this practice in vogue).

Gurkha and the Khukri are synonymous to each other like a shadow with human beings. Khukri has been one of the most feared close combat hand to hand combat weapon of the world and will continue to remain in the future as well.

Col RC Patial, SM, FRGS, PhD has served with the NSCS as a Senior Defence Specialist, with the NTRO as a Chief Editor of Open Source Intelligence and the first DD of the newly set up Training Academy. Post retirement, he served as the Principal, Meritorious Residential School, Amritsar. Presently, he is settled in Delhi.

How to organise the Armed Forces of India