The EurAsian Times on 29 May 2018 quoted CPC mouthpiece Global Times editorial stating “China has always kept a positive outlook towards India’s overseas port investments, but that doesn’t mean Beijing will turn a blind eye on India’s military collaboration with Indonesia. China’s extensive use of Malacca Strait means its economic and energy security gets threatened if India builds a military base at Sabang port in Indonesia”. The Global Times warned that if New Delhi actually planned to get military access to the strategic island of Sabang, it might get entangled in a conflict with China and eventually regret its decision.

The news was reported after Indonesia’s coordinating minister for Maritime Affairs, Luhut Pandjaitan visited New Delhi in April 2018. He had said to the media referring to Sabang that ‘the port’s 40 meters depth is suitable for all kinds of vessels including submarines’.

China’s apprehensions are not unfounded on the face of this news report. They would have appreciated that India and Indonesia together will become a formidable combination in the Indo-Pacific. Prime Minister Modi and President Joko Widodo signed 15 MOUs including Defence and Security Cooperation on 29 May 2018. They welcomed the plan to build connectivity between Andaman & Nicobar Islands and Aceh to unleash economic potential of both areas. It was decided to set up a Joint Task Force to undertake projects for port related infrastructure in and around Sabang.

Going back in time, India and Indonesia had begun exploring the idea of developing Sabang as far back as 2014-15. It was an economically unviable proposition at that time. But now, with up-gradation of ties to ‘Comprehensive Strategic Partnership’ the bilateral trade is likely to peak at USD 50 billion. In 2017, the growth of trade has been 28.7 percent. India is optimising its trade with ASEAN which will lead to sustainable and mutually beneficial trade relations with Indonesia. There are a number of untapped areas which are being examined by the Joint Task Force. The procedural impediments are being looked at. The economic potential will be further unleashed by establishing connectivity between Andaman & Nicobar Islands and Aceh province.

PM Modi also invited Indonesian business groups to invest through ‘Make in India’ initiative. MoU was also signed between Indonesian Chamber of Commerce and Industry (Kadin) and Confederation of Indian Industry (CII). CII is setting up an office in Jakarta.

The bilateral cooperation is also being initiated in health, pharmaceuticals, railways, civil aviation, development of ports and surrounding areas for people to people contact and to facilitate economic activities. Access to clean, reliable and affordable energy is critical for economic growth of the country and therefore, all avenues such as solar, wind and nuclear would be examined. It will be necessary to cooperate in promotion of energy efficient technologies, new and renewable energy technologies and shared vision of replacing fossil fuel while maintaining energy security. The agenda is very comprehensive and is in tune with good neighbourly relationship.

At this stage, examination of Indonesia’s internal electoral dynamics and geopolitical landscape is essential. It was for the first time in their history that the country held elections on 17 April 2019 for the President, Vice President, members of national, provincial and local assemblies all at the same time in one day without a hitch. It speaks very highly of political awareness of citizens and the deep roots of democracy.

Indonesia has always punched below its weight so far, because of its inward looking policies given their domestic compulsions. It has SE Asia’s largest population, largest economy and largest geographic area. The country is home to more Muslims than any other country in the world and yet it has had success with democracy. The notion of incompatibility of Islam with democracy has been set aside by Indonesia.

Former US Secretary Defence James Mattis referred to Indonesia as “fulcrum of the Indo-Pacific area”. US is increasingly interested in bringing Indonesia much closer in the emerging Indo Pacific security architecture more-so since it has over 13000 islands stretching across Indian Ocean to Pacific. The present dispensation in the Pentagon and State Department of the US appears to pursue the policies which Secretary Mattis had annunciated.

Seen in the wider canvas of Indian Ocean Region there is very strong Defence and Strategic convergence between India and the US, partnership having been lifted to 2+2 ministerial level. With a near certain return of Modi government in Delhi, continuation of strategic policies is expected. America’s efforts to Co-opt Indonesia as the fulcrum of Indo-Pacific and embracing India as important Strategic partner, the recent warming up of ties between India and Indonesia offers opportunity to blunt China’s increasing assertiveness. The Indonesian Minister coordinating Maritime Affairs, Mr Luhut Pandjaitan, during an interaction with the press stated very clearly that Indonesia would like to see India as a balancing power to China in the seas adjoining Indonesia. Indonesia has outstanding areas of dispute with China. Maritime boundary north of the Natuna Islands between PRC, Indonesia and Taiwan has remained an issue of friction. Natuna Islands are located more than 200 kilometres from Island of Borneo and is one of the outermost areas of Indonesia. Recently Indonesia has commissioned a military base in Selat Lampa on Netuna Besar Island, part of Netuna Islands. Though Indonesia is not a claimant state in South China Sea but Jakarta and Beijing have had several maritime skirmishes in this resource rich area, including one in 2016 when an Indonesian patrol boat seized a 300 tonne Chinese fishing vessel. Several hours later, a Chinese coast guard vessel rammed the fishing boat. This incident gave Indonesia reason to create this base which has roughly 1000 military personnel. President Joko Widodo has made it clear that Natuna Islands are Indonesia’s sovereign territory. China’s claims of 9 Dash Line makes Natuna adjacent waters potentially explosive. China objected to Indonesia’s naming of seas adjacent to Natuna as North Natuna Sea stating that it was within its territorial waters. 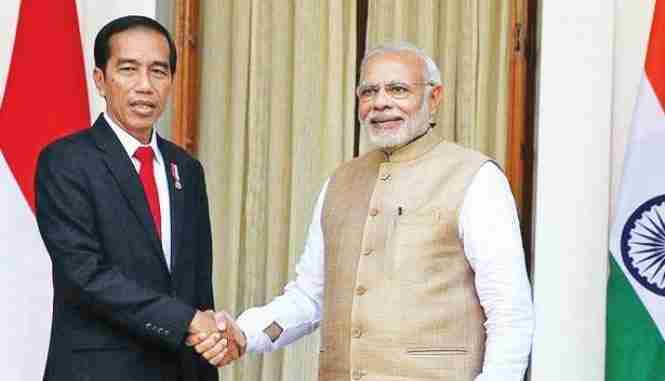 Rondo island, Indonesia’s northernmost island of Sabang district is only 163 kilometres from Indira point, the southernmost point of Campbell Bay of Andaman Nicobar Islands. Sabang island overlooks the Malacca Straits through which passes entire trade to and from Pacific and the Indian Ocean. Indian Naval presence in Sabang could provide surveillance opportunity to India and add to existing Indian Ocean Maritime Domain Awareness fusion centre, a flagship project in which approximately 36 countries are sharing white shipping data. This kind of awareness provides better opportunity to the Indian Navy for responding to any crisis in the Indian Ocean and better security to global commons in Sea Lanes Of Communication in the IOR. This is an essential ingredient for ‘net security provider’ to its neighbourhood.

In this geographical context, Andaman & Nicobar Islands are not too far from Sabang and technology would make it even nearer when President Joko Widodo And Prime Minister Modi begin their second innings.

Agniveers and ex-servicemen: Why stakeholders and policymakers need...

INDIA NEEDS TO COUNTER AND CREATE CONSCIOUSNESS ABOUT...

CHINA SITS BACK AND WATCHES THE WORLD CRUMBLE...

DELHI RIOTS AND US PRESIDENTIAL VISIT

THE INDIAN FAUJI AND POLITICS: WHAT ARE...