Army marches on its stomach, but needs an uninterrupted supply of small arms and ammunition to fight. Besides the army, seven para-military organisations, and innumerable state police forces, as also military Special Forces and in the states, have to be equipped. Some two million pieces, ranging from 5.56mm to 12mm, and hundreds of thousands of tons of matching ammunition, are required every year by all armed forces in the country. The Ordnance Factory Board (OFB) seems incapable of meeting this demand or satisfying its customers in terms of product quality (INSAS 5.56mm rifle) or quantity. 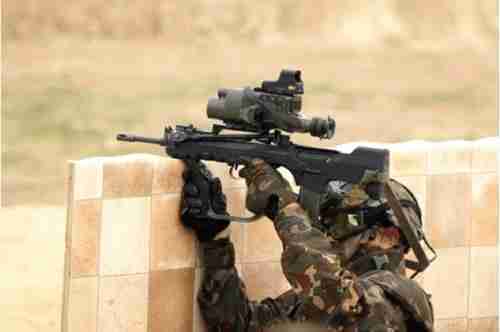 Frustrated armed services, paramilitary units, and Special Forces have learned to buy weapons of their choice to supposedly meet time-critical needs by importing them in small enough tranches at high prices to avoid censure. It has multiplied hard currency expenditures and logistics headaches owing to the sheer diversity of weapons, and highlighted the absence of a reasonable national small arms policy.

The defence public sector (DPS) is beyond repair. According to a Niti Aayog study, the value produced per worker in ordnance factories is a meagre Rs. 6 lakhs versus the minimum of Rs. 40-50 lakhs in value that is required to be produced per employee to make even a micro, small, and medium enterprise financially viable. A far reaching solution has been bruited about within the Ministry of Defence (MOD) ever since the previous defence minister Manohar Parrikar was briefed about a unique ‘strategic partner’ model stressing economies of scale to drive the flagship ‘Make in India’ programme and to generate millions of jobs.

Per this model, the partner-company is selected on the basis of its versatile portfolio to manufacture not just one kind of weapon, hardware, or piece of military equipment but the entire family of weaponry and systems. Such schemes would cover the gamut of military use items, where the country is deficient. The selected foreign company would be helped to secure land and the basics (power, water, etc.), but would be free to choose its Indian collaborator — a private company or DPS unit — and to run its business as it sees fit without any Indian government interference, and to export what it produces after meeting the country’s requirements; in other words, to make India a global manufacturing hub. HK has decided not to sell its wares to corrupt, undemocratic, non-NATO countries, including India (with a recent order by the Border Security Force being turned down). FN is ruled out because it owns the American arms-making companies, Browning and the firm that once produced Winchester repeater rifles and,inthe context of the 2018 Countering Adversaries of America Through Sanctions Act, is susceptible to American pressure. IWI got a drop on the competition by first tying up with OFB to produce the ‘Zittara’ assault rifle, which was rejected by the army. Having learned its lesson, it next tied up with Punj-Lloyd to locally produce its X-95 Tavor family of weapons and has fared better.

But because the requirements for small arms and ammo are large and recurring, the country should ensure competition by also selecting, if belatedly, the Kalashnikov Concern as a second strategic partner to produce its range of weapons based on the ‘Avtomatni Kalashnikova’ (AK) series of weapons, famed for their ruggedness, ease of operation, and low cost of production, for local use and for exports. This strategic partner model can be applied to the production of ammunition too. Commonality in arms and ammo should lead to shared armouries and logistics system for all forces – military, paramilitary, and police, and to the more economical use of the Indian national security rupee.

This solution has not found traction because the government is keen on diversifying sources of arms supply. The real reason is that procurement is zealously protected turf for all organisations and ministries. More frequent tenders and acquisitions deals mean greater opportunity for more people in the decision loops to make money. Fully indigenising supply sources will end this nefarious business. Who wants that?

Bharat Karnad is a Research Professor in National Security Studies at the Centre for Policy Research, New Delhi. A version of this article was first published in the Hindustan Times, June 14, 2018.