After years of delay, India and Russia are likely to soon ink a “milestone” pact to finalise the detailed design for the fifth-generation fighter aircraft (FGFA) and move ahead with the multi-billion dollar co-development project. As per govern-ment sources, almost all the ground work has been completed to finalise the deal for the design of the jet as well as some oth-er critical issues. The contract is thereafter, likely to be signed sometime in the second half of 2017. The project dates back to 2007, when India and Russia first inked an inter-governmental pact for the FGFA project.Three years later, in December 2010, India had agreed to pay USD 295 million towards the prelimi-nary design of the fighter. The negotiations faced various hur-dles in the subsequent years and the project was stalled, finally being revived after work on various co-development projects were expedited following the government’s renewed focus on modernisation of the armed forces. As the FGFA is being co-developed by both India and Russia, both countries will have equal rights over the technology. Thus the issue of technology transfers in this case does not arise and India will have the wherewithal to continue production. In the negotiations for the project, India had insisted that it must get all the required codes and access to critical technology so that it can upgrade the aircraft according to its requirements. 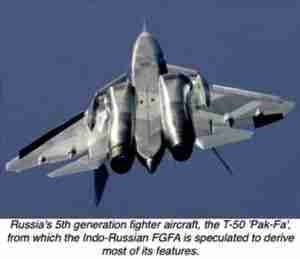 The FGFA project received a fillip in February last year, when India and Russia had revived talks on the project after a clear-ance from then Defence Minister Manohar Parrikar.Since then, multiple issues related to work share, intellectual property rights and technology transfer among others have been sorted out between the two sides, along with the monetary commit-ments. 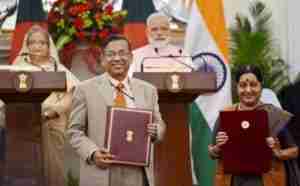 India and Bangladesh signed 22 agreements on April 8, 2017, in strategic sectors like defence and civil nuclear cooperation during Bangladesh Prime Minister Sheikh Hasina’s visit to India. In a joint statement after signing of agreements in Del-hi, Prime Minister Narendra Modi announced a new line of concessional credit of $4.5 billion for implementation of development projects in Ban-gladesh. Apart from that, Modi also announced $500 million of credit for defence procurement by Bangladesh from India. Defence pacts were the key deliverables from the Bangladesh PM’s visit which has been de-scribed as ‘very very special’ by India. While an umbrella agreement on defence ties will encom-pass all existing defence cooperation including joint exercises and training, Delhi will offer USD 500 million worth Line of Credit to Dhaka for buy-ing defence equipment. This is the first such occasion that India has extended a defence related Line of Credit to any South Asian neighbour. As of now, Bangladesh buys about 80 percent of its defence needs from China. The defence deal is intended to chip away at this dependence on China and to allay Bangladeshi concerns with respect to seeing New Delhi as the prime threat. In toto, four defence-related agreements were signed, which include a defence framework pact and two MoUs between defence colleges.To appeal to sentiment, India also stressed the need for a defence relationship through the prism of the 1971 war of independence. This was explicitly underlined in the joint statement: “The two leaders agreed to foster mu-tually beneficial and deeper defence cooperation, taking into account the illustrious history of cooperation which began with both forces’ joint operation during Bangladesh’s Great Libera-tion War in December 1971”. 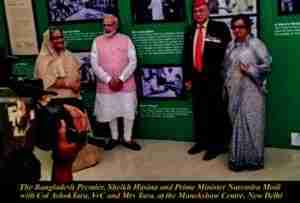 A significant aspect of the visit if Sheikh Hasina to India from 7-10 April 2017 was the honouring of the families of Indian soldiers who were killed in action (KIA), in the Bangladesh Liberation War of 1971. Sheikh Hasina personally honoured seven of the families in a function organised in the Manekshaw Centre by the Indian Army, which was also attended by Prime Minister Modi. Over the next two to three months, the families of all the soldiers who laid down their lives for the cause of the Liberation of Bangladesh will also be honoured by Bangladesh. This has reestablished a strong emotional connect between the two countries which has been further bolstered by India now giving scholarships to the wards of the Mukti Bahini to study in India and also agreeing to provide free medical care to 100 Mukti Bahini veterans. Sheikh Hasina has thus looked back to the past, when the Indian armed forces fought shoulder to shoulder with the Mukti Bahini to get freedom for Bangladesh. While speaking at a reception organised by India Foundation in her honour, she spoke of the horrors of the genocide committed by Pakistan on her people and the fact that both India and Bangladesh shed their blood to Liberate Bangladesh. She spoke of getting together again to fight the common scourge of poverty and terrorism, symbolically through such cooperation. 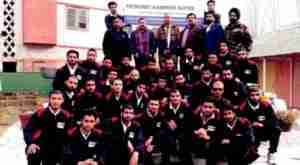 The Army’s Kashmir Super-40 initiative for coaching J & K youth for IIT Engineering Entrance Exams broke all previous records when 26 boys and two girls cracked the IIT-JEE Mains Exam 2017. Conducted at Srinagar by the Army’s training partner, Centre for Social Responsibility Learning (CSRL) and Petronet LNG, this year’s performance was the best wherein 28 successful students include nine from South Kashmir, ten from North Kashmir, seven from Ladakh and two from the Jammu region. Since 2013, this was the first batch in which 05 girls from Kashmir Valley were coached at Delhi out of which two have qualified. Apart from IIT’s, the students of Kashmir Super-40 have equally excelled in various other Engineering Colleges Exams throughout the country.

BEL: Getting to the core of Electro Optics

Night Vision Devices (NVDs) work by collecting amounts of light, imperceptible to the human eye, and amplifying it to a point we can easily see an image. NVDs gather ambient reflected light which emanates when starlight or moonlight falls on to an object. The front lens receives the reflected light made up of photons and sends it into an Image Intensifier Tube (II Tube). The light first falls on the Photo cathode tube that changes the photons into electrons. The electrons are then passed on through a Micro Channel Plate (MCP), wherein their numbers are amplified through an electrical and chemical process. The electrons are then impinged against a phosphorus screen that changes the amplified electrons back into visible light (image), which is seen through the eyepiece. The image will be seen as a clear, green-hued, amplified, re-creation of the scene being observed.

Night Vision and Electronic Sensors Directorate of the US Army has classified image intensifiers as Gen I, Gen II, Gen III, etc, based on the changes happening in manufacturing technologies. Generation I had a low gain and no MCP. Image intensifiers with MCP were subsequently developed and called Generation II. Both these had the Photo Cathode made of multi alkali material. Next came the image intensifiers which used GaAs as cathode material and a filmy layer coating on MCP, termed as Generation III. The definition of Generation IV would be an unfilmed MCP in the image intensifier. These are all technical issues, they tell how image intensifiers are produced, but not how they perform. Innovations in photocathode technology significantly reduced the tube’s noise and increased the signal to noise ratio which is the undisputed characteristic to describe the low light level performance of an Image Intensifier Tube. The US government has recognised the fact that technology employed by different manufacturers varies, and itself makes little difference as long as an operator can see clearly at night.

The generation number tells only how an image intensifier is manufactured. It does not tell anything about the performance of a tube. By 2001, the United States federal government concluded that a tube’s ‘generation’ was not a determining factor of a tube’s global performance, and therefore the term was eliminated as a basis of export regulations. Consequently, the United States has based its export regulations not on the generation, but on a calculated factor called figure of merit (FOM). FOM is an abstract measure of image intensifier performance, derived from the number of line pairs per millimetre (resolution) multiplied by the tube’s signal-to-noise ratio. The Indian Army has understood the importance of FOM and all its recently released Request for Information (RFI)/ Request for Proposals (RFP) for Night Vision Devices specifically mention the required FOM. 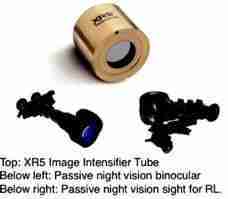 BEL Optronic Devices Ltd (BELOP) — formerly BEL DELFT — a fully owned subsidiary of BEL started manufacturing of 2nd Generation Image Intensifiers in collaboration with and as a Joint Venture with BV DELFT Netherlands in the year 1994, as directed by the Ministry of Defence. This was aimed at having indigenous capability in India for such critical technologies. Subsequently, the technology was upgraded to Super Generation and Hyper Generation grade with in-house developments. In 2012, the plant was upgraded to produce XD-4 II Tubes with technical know-how from Photonis, France, and about 40,000 tubes were supplied. The plant is presently being upgraded to XR-5 grade with a capacity to produce more than 30,000 Image Intensifier Tubes per year. BEL also has plans to produce MCP indigenously with ToT from Photonis once the XR-5 is fully established. The typical values of FOM for various grades of image intensifiers that are produced at BELOP are given below:-

Type of Image Intensifier Typical FOM The plant set up by BELOP is a state-of-the-art facility with a huge investment exceeding Rs 500 crores built on a total area of 13,608 sq mt and the built-up area of 8,650 sq mt. It has a workforce of about 130 permanent employees besides contract staff. There are more than 200 processes involved in the manufacture of XR-5 Image Intensifier Tubes and are controlled and monitored by highly qualified and competent engineers. BELOP has also established advanced test facilities to ensure quality and reliability of the II Tubes. BELOP is ISO 9001:2008 certified. India is today one of the few countries in the world possessing this highly guarded technology. This facility is an asset worth mentioning among the top OEMs of II Tubes in the world and thus, provides the following strategic advantages to India:

»» No necessity of End User Import and Monitoring License for II Tubes procurement by OEMs of PNVDs.

ACT WITH ALACRITY ON KASHMIR VALLEY AND PAKISTAN