In the years preceding Independence, while the Indian Military Academy (IMA) grew from its formative years, changing or adapting organizationally to cater to a comparatively smaller number of cadets as compared to the post-Independence years. India’s post Independence wars, conflicts and threats necessitated increasing the numerical strength of cadets as also enhancing training requirements and facilities.

Keeping in mind the basic principles of imparting high quality military training and also developing the personality and talents of the trainees, IMA grew and expanded over the decades, adding more training aids and resources as compared to what it had till Independence and even couple or more decades post Independence. 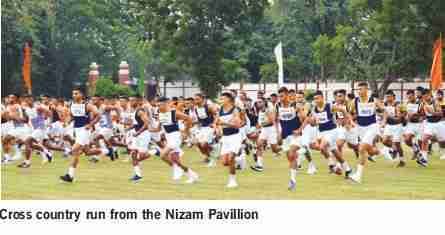 As the premier training and finishing-school institution for officers of the Indian Army, IMA needed to institute courses for cadets from varied sources like the tri-service National Defence Academy (NDA), colleges and the below officer rank personnel who aspired and qualified to become officers and were selected for the Army Cadet College (ACC). The intake from colleges came under the categories of Direct Entry, University Entry and Technical Graduates. 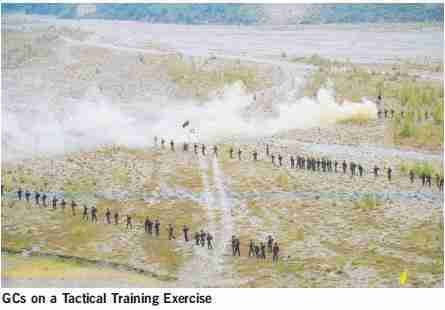 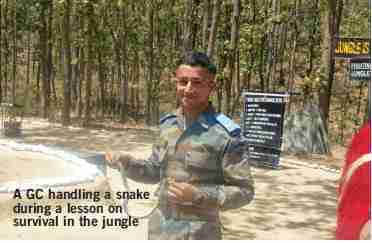 Post Independence years were also marked by progressive changes in weapons and forms of warfare. For instance, in 1947-48 Indian Army redefined mountain warfare by deploying troops and even battle tanks in the Himalayas at altitudes of 14,000 feet (Zoji La), which by 1984, when Indian Army deployed in the Siachen Glacier, went up to 22,000 feet. For the Western world mountains meant 8,000 feet like the Alps. So developing skills in high altitude mountaineering and rock climbing became an important requirement. Weapon Training
The very high standard of weapon training imparted to the GCs in the Academy, also includes the following:

(a) Close Quarter Battle (CQB) Range. CQB range developed with an aim to train GCs in reflex shooting and engage targets at close range consists a total of 15 rooms divided into two firing alleys of seven rooms each and one common room. Two GCs can fire simultaneously in each alley. A total of 30 targets mix of static, pop up, traverse and hostage targets are used for firing practice. High resolution CCTV cameras are placed in each room to facilitate control at all times. Video playback option and live streaming options are also available facilitating waiting details to observe the faults and institute corrective measures accordingly.

(b) Location of Miss and Hit Target System (LOMAH). LOMAH is an acoustical projectile detection system installed with an aim to impart quality weapon training to GCs by facilitating application and classification fire. It is an all- weather equipment, which enables live firing and unlike simulators, provides instant results/review of shots to the firer and saves time by obviating physical checking and repairing. The scores obtained by GCs can be retrieved and printed at a later stage.

(c) Team Battle Shooting Range (TBSR). TBSR has been introduced for IIIrd term Gentlemen Cadets with an aim of training them on practical aspects of employment of platoon and section weapons in a defensive battle as also to exercise them on fire control orders. 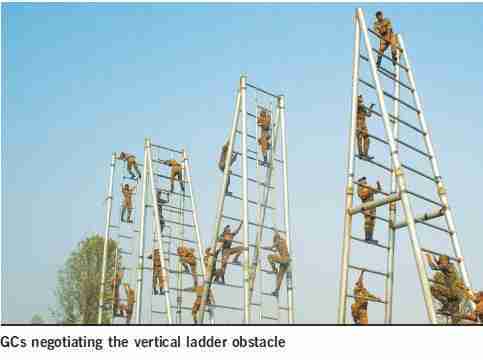 Jungle Lane Shooting
Jungle Lane Shooting is carried out as an integrated part of GCs Exercise GOLABARI and involves exercising GCts on effective engaging of targets emerging in a jungle terrain in the backdrop of a Counter Insurgency/ Counter Terrorism scenario. The lanes comprise of various types of targets so placed to exercise GCs on their reflex shooting, quick identification and recognition of targets, speedy engagement and bringing down aimed fire. The exercise is very effective to instill confidence in GCs for operating in Counter Insurgency/ Counter Terrorism environment which they are likely to be in the thick of an induction into such areas after getting commissioned, like for instance Jammu and Kashmir, particularly the Kashmir Valley and stretches along the Line of Control. Obstacle Course
Negotiating the obstacle course for a beginner can be a bit frustrating but with determination, doggedness and encouragement from instructors and fellow trainees, once success has been achieved in crossing all, it becomes almost fun.

The obstacle course of IMA today is more enhanced and tougher than it was 3 to 4 decades ago, as acknowledged by veterans. 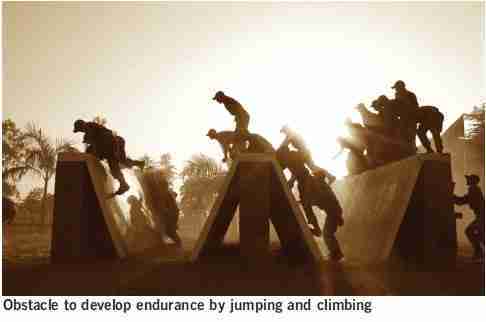 Tactical Training Camps
All the tactical training at IMA is marked by 5 to 6 days outdoor training camps, when GCs are put through the basics of tactical training and endurance under pressure. Survival and living off the land also form part of this programme, which includes introduction to knowledge of discerning edible leaves and berries as well as catching rabbits and snakes and of course, know how best to cook them with frugal resources.

Games
GCs are encouraged to play as many games as they can and their instructors too play as many games as possible with them The games are basketball, polo, athletics, football, aquatics (swimming, diving and water-polo), volleyball, hockey, boxing and cross-country.
A sports meet is held every term /once a year in which teams of National Defence Academy, Officers Training Academies at Chennai and Gaya, Indian Military Academy, Air Force Academy and Naval Academy participate. 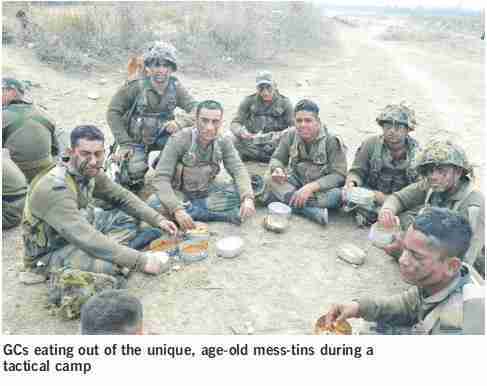 Sports and Hobbies Clubs
Membership of a club is compulsory for GCs. The Academy has the following indoor and outdoor clubs:
(a) Indoor. Journalism, arts, music and drama, computer application, GIS and electronics.

Mid Term Break Sports and Adventure Activities
The mid-term break is organised as the adventure training break. All GCs of 1st and 2nd terms proceed on training hikes to various destinations of cultural, historical and military importance. Adventure activities like trekking, cycling, rock climbing, water sports, paragliding etc. form essential part of each of these hikes.

The Academy undertakes a host of adventure activities for GCs which also include cross country, riding, angling, bird watching, white water rafting and kayaking. Adventure training hikes are conducted to various destinations of cultural/ historical importance which are clubbed with adventure treks/ camps and expeditions. All officers at IMA also take active part in adventure activities and accompany the GCs in adventure training hikes organised during the mid term breaks.

Local multi activity hikes include white water rafting, para sailing, and cycle expeditions are organized for GCs who stay back in the Academy.

During the Mid-Term break the III termers proceed on Forward Area Tours to various field formations for familiarisation and interaction with troops.

Sports Facilities
A wide variety of sports facilities grounds/courts for games like hockey, football, basketball, volleyball, aquatics, cricket, squash, tennis and golf are located in the campus. The Academy has an Olympic size swimming pool and an indoor plunge bath. IMPORTANT LANDMARKS AND INSTITUTIONS OF THE IMA CAMPUS