Should old acquaintance be forgot and never brought to mind? This is the rhetorical question posed in this famous Scottish ballad which still gives goose bumps to most army guys, as it stirs up memories of the finest years of one’s life spent at our alma mater: the Indian Military Academy, Dehradun. Fifty years ago nearly 400 Gentlemen Cadets of the 41st Regular and 25 Technical Course formed up on the Chetwode parade ground to the massed bands playing “Sare Jahan Se Accha Hindustan Hamara…” and trooped out in slow march for our tryst with destiny, to the haunting melody of Auld Lang Syne, and took the momentous final step which transformed our lives forever!

From swashbuckling happy-go-lucky teenagers, suddenly the weight of a single brass star on the shoulders became comparable to the mythical Atlas holding up the world! Maturity and a sense of responsibility seemed to come forth overnight. The Chetwode credo, emblazoned on our hearts and reverberating in our soul became the touchstone and benchmark for all our future actions. The young and audacious Gentleman Cadet was now an officer of the glorious and renowned Indian Army! The next fifty years would be lived with valour, honour dignity and sacrifice.

180 of us veterans along with our wives, as also a dozen brave wives of our departed comrades came to Dehradun on a pilgrimage, to pay homage to our revered alma mater, which made us, mere mortals of straw, into upright welltrained men, ready to give all to our motherland, at a moment’s notice.

Though frail in body and faltering sights, yet unbroken in spirit, we came from far and near, India and abroad, by car, train air and bus, eager to meet with course mates and friends of fifty years and more! Kudos and salutation to the IMA which welcomed us not only with open arms but with a warmth and longing reserved for the return of a ‘prodigal son’. We were pampered, fussed over and treated like we had never left! The welcome filled our hearts with pride and confidence that the finest academy was in safe and capable hands of a new generation which still cherished old values! Our preparation for the Golden Jubilee had started a few years back with military precision. A dedicated core team and volunteer organising committee spent the good part of last year coordinating each and every minute detail meticulously and oh! so competently. It was like a flawless military operation catering to every contingency! We were overwhelmed and happy to see the improved infrastructure befitting a world class military academy and yet the training and upbringing was as rigorous and thorough as we remembered. 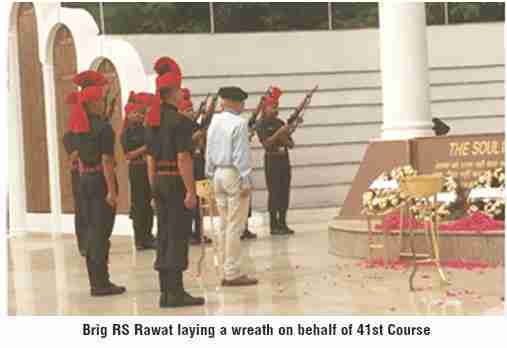 So, the question arises, why would 70 plus years old seniors, few with indifferent health, come to the academy to be with other veterans, some of whom they had never met or known in the academy nor ever come across in the fifty years gone since! What draws coursemates who at best were acquaintances at IMA, to make this journey for a few days of fun and bonhomie? The answer lies in the fact that on a fateful day of June 8, 1968, together we took the ‘final step’ and forged a lifelong unshakeable bond. A bond tempered and strengthened in the sweat, toil and immense hardship borne together with fortitude, while undergoing rigorous training which would hone us as the finest officer soldiers of the country. It is in the shared adversity and extreme hardship that enduring friendships are forged and cast. But what of the dozen single ladies who had lost their husbands along the way, who also undertook the nostalgic journey to Dehradun? It would be difficult for anyone else except faujis who understand the army ethos to even comprehend the emotive pull of being with their husband’s course mates. They came because we are an extended family; they came because their husbands would have come. As one lady told me, “I came because among you all, I can feel his presence so distinctly!” This is what binds us, a unique relationship which exists, but defies logic to all, except us! Our wives came to savour for themselves the pull of the academy, and relate to the stories often told and retold, and meet up with other ladies of the course who had been friends for decades and to stand by their husbands as they always do! We sang, and we danced, we hugged and we high fived, cracked naughty jokes, shared reminiscences and relived secret escapades and adventures. It was as if the very soul and spirit had been recharged and rebooted. While standing at attention at the war memorial, as the soul stirring last post was played, most eyes were moist, but hearts were filled with pride! An incident merits recounting. A course mate with a medical condition stood forlorn in a corner gazing wistfully at the distant memorial unsure of making it alone. Without asking, a course mate appeared alongside and unobtrusively and deftly supported him. Together the duo slowly but with steely resolve and much dignity reached the memorial and paid their due respects to our departed martyrs. No thanks were due, no words were spoken, nor were they needed. It was just ‘the done thing’!We parted from IMA the crucible of leadership deeply satisfied and bid a touching farewell to friends, ladies and course mates of five decades, perhaps for the last time! Thus, once again the question arises; Should old acquaintance be forgot and never brought to mind? The answer across generations of course mates is a resounding and unequivocal No, they should not be forgot but nurtured and cherished as we did! Thank you, my friends, blessed to have been part of your lives! Time is fast approaching for all of us to finally ride away into the sunset! But till then, keep rocking and keep smiling!